Before the advent of the infernal consumption engine people travelled about by horse, both the mechanical kind and the animal. Before that, of course, there were footpaths and tracks. In New Zealand the Maori, who arrived from Polynesia by sea canoe, made the first tracks into the interior. So when white settlers wanted to exploit the interior of the country they chose Maori guides who used these Maori highways to take them there.

Mt Ruapehu in the centre of North Island was sacred to the Maori and the early settlers followed their route from Hawkes Bay. It later became a coach road, then a dirt road, a gravel road and now a sealed road, the Napier-Taihape road which we now followed, travelling West into mountain country. It’s known by the affectionate name of the Gentle Annie road.

It was a beautiful twisting route over a pastoral landscape and you could easily imagine the sway of the coach, the crack of the whip, the panting of the horses as they laboured across the landscape. 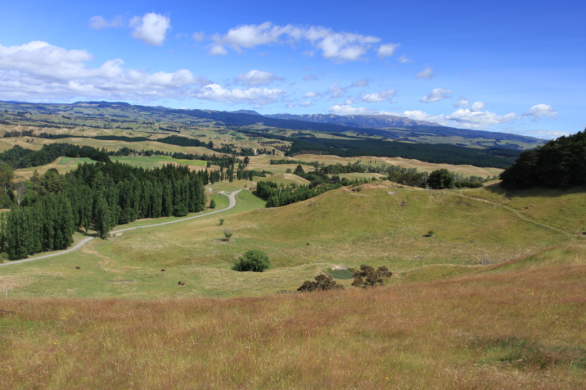 We were headed for Ohakune, a town which nestles below the ski slopes of Ruapehu. In winter the town is packed with winter sports enthusiasts but in summer it is quite empty and we easily found a three bed, modern house to rent for less than £40 a night. We had acres of space and all the necessary facilities so it was a steal. Mind you, there was a house being built next door so the view wasn’t wonderful but we did get to see two chippies erecting the wooden structure of the house right before our eyes. It only took them a few hours to get the basic shell up.

In keeping with our recent escapades in Hawkes Bay our house was in Wineberry Lane but that’s not why we chose it, honest!
There is also a coach road running from Ohakune to the small settlement of  Horopito, on the other side of Mt Ruapehu, only this time it’s a cycle or walking trail. You can imagine which option we took – strictly by foot. In fact we split the walk over a couple of afternoons as a change from walking in the mountains. It must have been a very uncomfortable ride on those old coach roads because even walking on them was difficult at times. When trains arrived in New Zealand they soon took over from the horse drawn coach but the railway lines often followed the route of the coach roads or crossed them at some point and on this track from Ohakune you get to visit some of the old rail lines with their impressive viaducts over river gorges.

At the other end of the Old Coach Road lies the odd little town of Horopito and the strangest museum ever. Billed as Vintage Motor Car collection it is, in fact, a large scrap yard and spare parts store but what an incredible place. I happily paid NZ$5 to wander round photographing some of the thousands of hubcaps, steering wheels, lights, radiators and every imaginable part from motor cars beginning at the very earliest days of motoring right through to the present. It was a mess, it was mad and eclectic, it wasn’t a museum but it was well worth a few quid to wander around a slice of history. 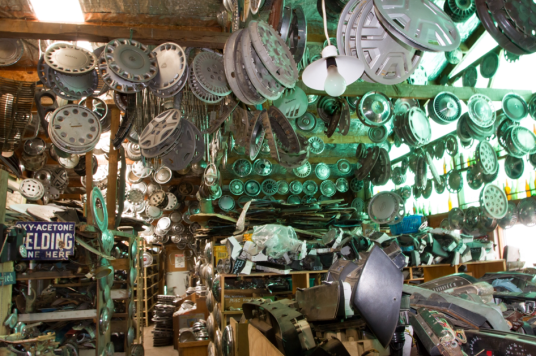 But we had come to Ohakune not to dwell on the past but to walk amongst the volcanoes on the Tongariro National Park. There are three volcanoes in Tongariro; Mt Ruapehu, the tallest and a stunning ski field in winter, Mt Ngauruhoe, a perfect cone which had a starring role in the Lord of the Rings trilogy as Mount Doom (fancy having to wait 2,500 years for your film debut), and Mt Tongariro which is a very active volcano even now. In fact, in Ohakune we were woken up at 1.30 in the morning one day by an earth tremor measuring a modest 3.8 which occurred in the Tongariro area. We first became aware of a low rumbling noise and then felt the house shake. We were a little concerned, staying as we were underneath a volcano that had last erupted in 2007 but the warning sirens didn’t go off so we turned over and went back to sleep.

Our first walk on the slopes of Ruapehu, our favourite mountain, was a gentle 7 km walk following a cascading stream. At the rapids the silica deposits make the stream appear to be golden and along the way you get some great views of Ruapehu, despite the cloudy conditions. But that evening after our meal, we suddenly realised  that the clouds had cleared and that we were going to get a sunset on the mountain. So in a madcap dash, Jane driving, me leaping out of the car now and again, camera and tripod in hand, we  drove up to the ski field above Ohakune to catch Ruapehu revealed in all its glory. 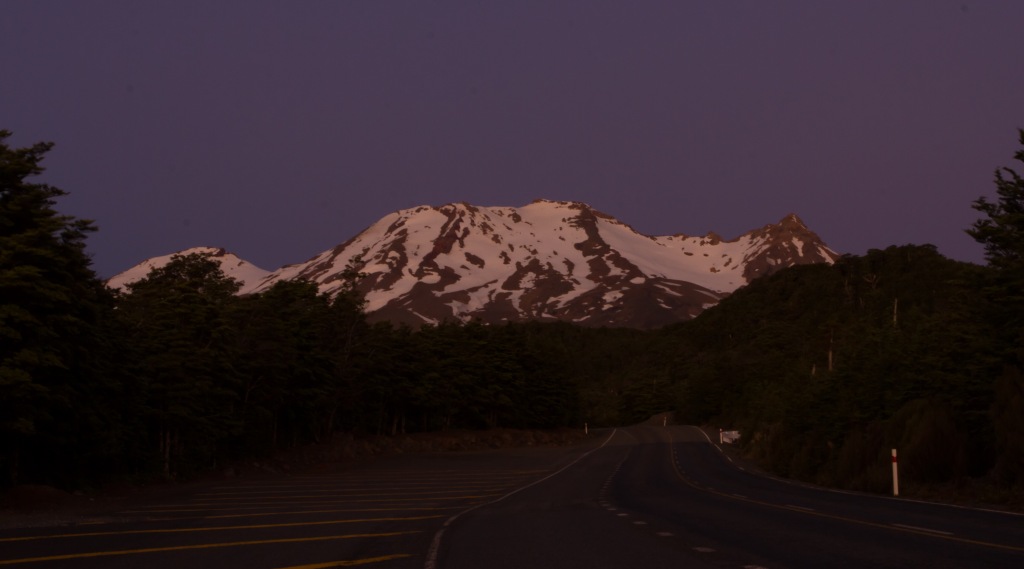 I also captured the image of Mt Taranaki in the far distance which features at the top of this page. It was a rare sighting of a volcano which is usually covered in cloud.

For our final day in Tongariro we wanted do a serious walk. Jane was still not 100% but we felt we might be able to tackle at least some of the 17 km walk to the Tama Lakes. We said we would get as far as we could and turn back at any point if we’d had enough. The viewpoint for Lower Tama lake is at 1240 mtrs and it was a fabulous walk across old lava flows with Ruapehu on one side and  Ngaurohoe on the other. The view of the lake was wonderful and we felt strong enough to tackle the ridge line walk to the viewpoint for the upper lake, another 200 mtrs higher. It was hard going but the view from the top made it all worthwhile and it was a real achievement for Jane to get to the top and back down a very tricky slope, given what happened the last time we were in New Zealand when she fell and broke her wrist on similar ground. 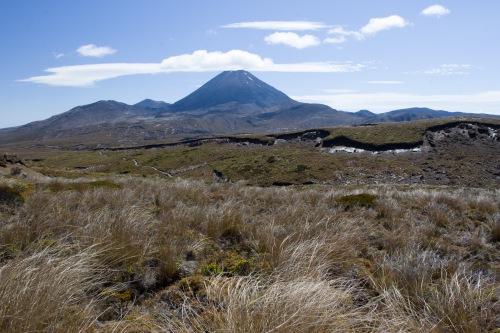 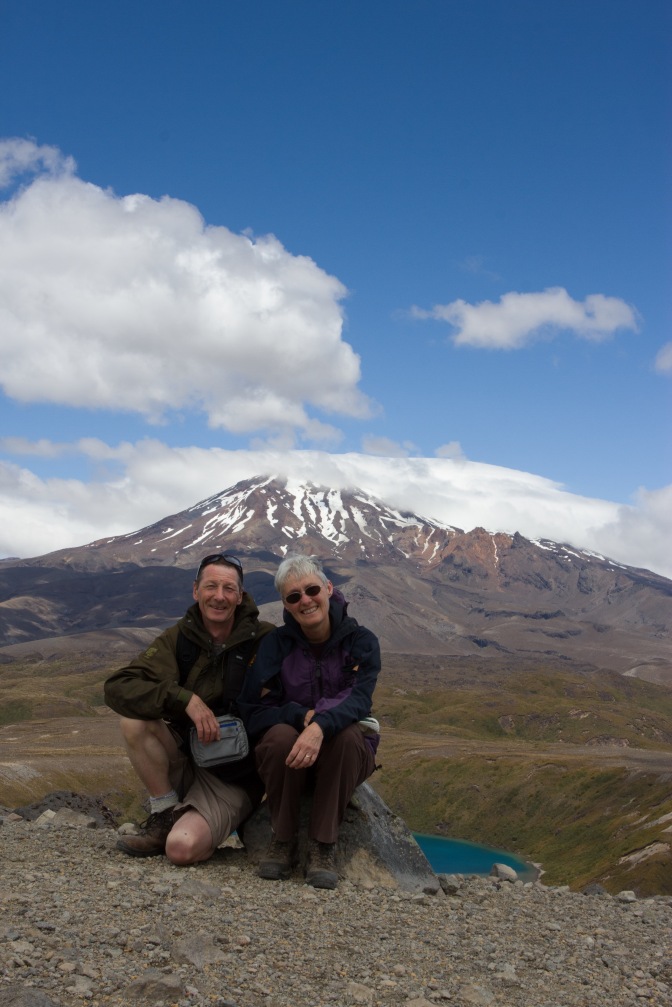 This was our third visit to Tongariro and we’ve enjoyed every single one so who knows if and when we’ll be back. There’s still plenty to do around here. But now it’s time to move on to Wellington and take the ferry to the South Island.