Mt Ruapehu was covered in cloud as we left Ohakune, which is probably just as well otherwise we’d have been tempted to stay. But we had to make our way to WellIngton  because it was time to travel away from the bustle and noise of the North Island, where three quarters of New Zealand’s population live, and make our way to the South. About 1 million people live in the south, boosted annually by another million visitors.

In keeping with our relaxed approach this visit, we didn’t take the direct route down the SH1 but turned off at Vinegar Hill to follow a country route over the impressive gorge of the Rangitikei River. There were wonderful views of the Ruahine Range of hills and the delights of Cheltenham to look forward to. Yes, when we hove into Cheltenham, New Zealand it was as though we were already home. Or not.

For one thing, there’s no spa water in Cheltenham NZ and for another there’s no nothing in Cheltenham NZ. Presumably, some poor beknighted fool back in the day emigrated here and thought he’d establish a pretty Cotswold town out in the bush.

There’s a pub, the rather dashingly named ‘Chelty’, a general store and a village hall, albeit with quite decent loos. And that’s about it. 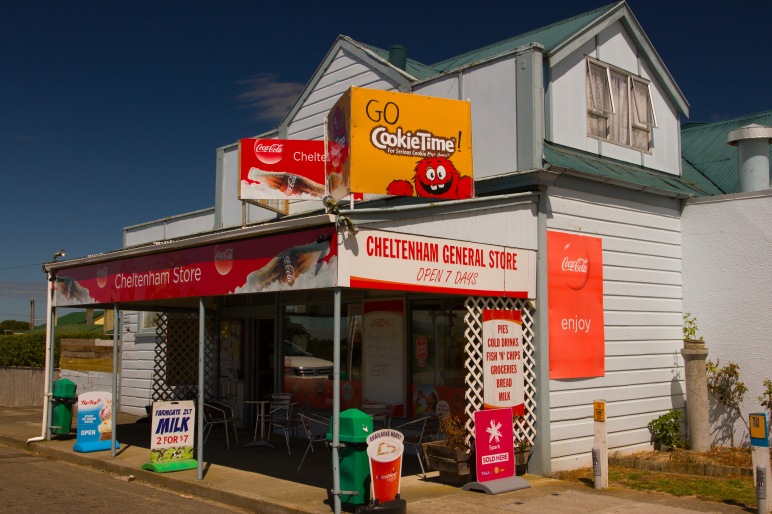 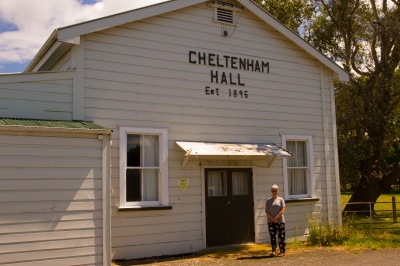 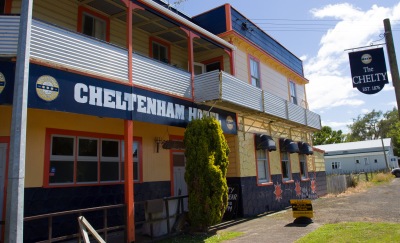 We spent some time talking to the lady who ran the pub, even though it wasn’t actually open for business until later in the afternoon. Apparently, she gets quite a few visitors from the Cotswolds and has a few photos and other memorabilia dotted about. Her van claims that her ‘hotel’ is the best  country hotel in NZ. Well, at least she’s got the Cheltenham disease of hyperbole about right. 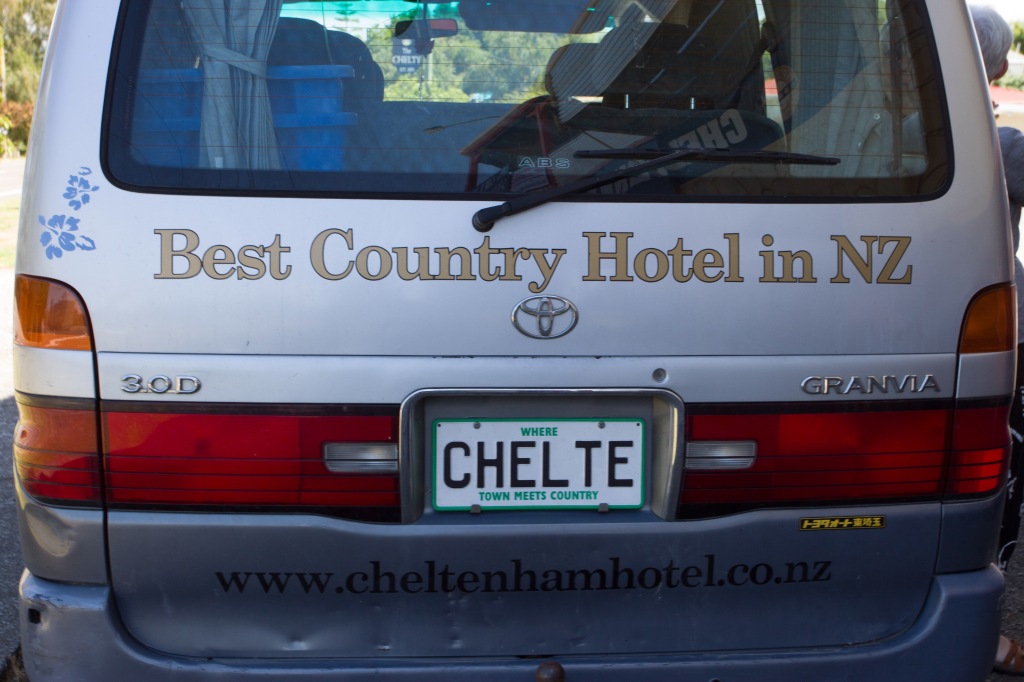 I don’t think the landlady is a careful parker!

And so on to Wellington, capital of New Zealand and Middle Earth. We had a lovely spacious apartment in The Terrace close to the centre of town and had several great meals at local eateries. Wellington is not exactly, London, New York and Paris  but it’s a very pleasant place to spend a few days before getting the ferry. We mostly wandered about the city but also took a trip out to Zealandia. New Zealand’s native wildlife has been decimated by the effects of the first settlers, the Maori and by later white settlers and their introduced non native pests such as rats, cats, possum, etc . New Zealand originally had no real predators and the wildlife finds it hard to cope with these introduced varieties. Zealandia was created as  New Zealand’s first predator free wildlife park. It is ringed by a steel perimeter fence which has been very successful at keeping predators out. In fact, the manager of our apartment told us that he had lived in Wellington 50 years and in his childhood if you saw a Tui, an indigenous NZ bird you went out and photographed it. Now they come and sit in his tree as he is eating his lunch so a big plus for those who had the foresight to make this happen 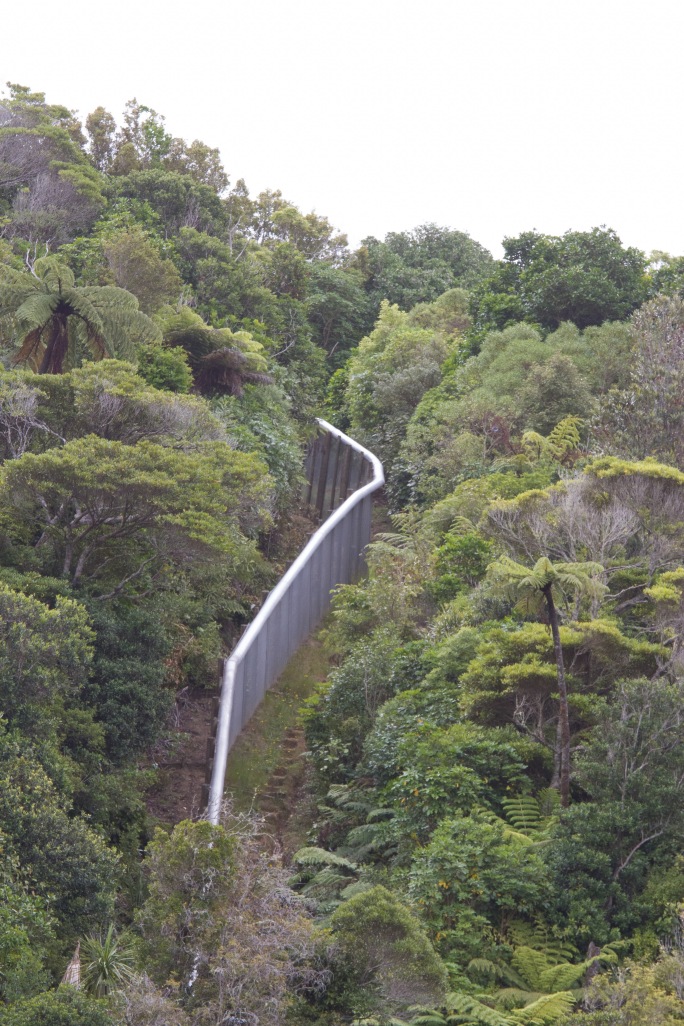 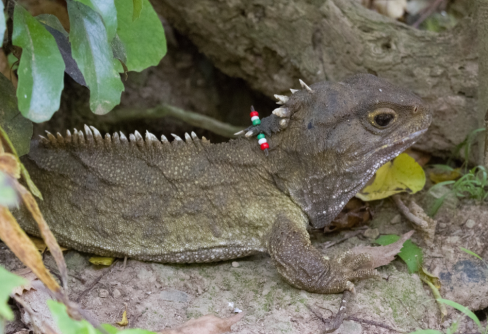 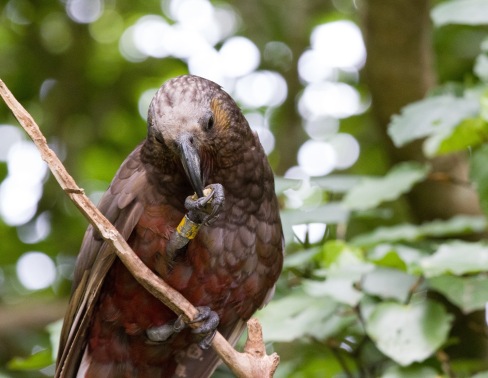 It was rather overcast as we sailed out of Lambton Harbour aboard the ferry bound for Picton and the South Island, unlike the previous times we had made the crossing. We picked up a few supplies at the local bakery in Picton which we knew sold the best bread in the country and delicious pies. Once again we wanted to experience somewhere new so had booked a ‘mud brick’ house near the town of Blenheim and right in the middle of the Marlborough wine growing region. 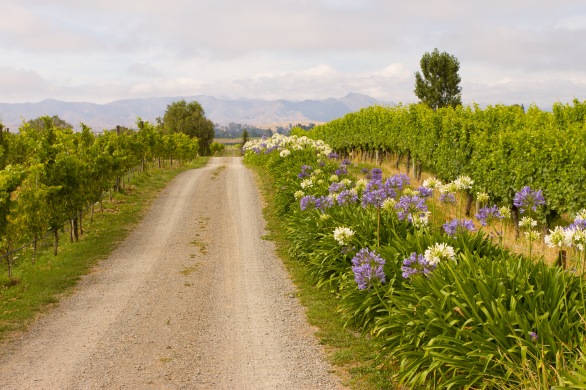 We are fans of New Zealand white wine and driving down Rapaura Road was like taking a stroll along the New Zealand isle of Majestic wine warehouse in Gloucester. There were wineries and vineyards every few metres and we had bought wine in the UK from virtually every one of them; St Clair, Cloudy Bay, Huia, Nautilus and many, many more. It was like being a kid in a sweetshop.

The vineyards around Blenheim are so tightly packed and the roads so flat that it is easy to cycle around them but walking is so much more fun and we could see on the wine tour map that there were several wineries within striking distance of our house. So we donned walking boots and set off in the bright sunlight, a swing in our step.

The first winery we came to was Nautilus where we met the delightful and knowledgable Nicky, a Pom who had been a lawyer back in the UK but decided that NZ had more to offer her, not in terms of income but in lifestyle. We can empathise with that. Nicky has embraced her new job, has taken a course in wine making and clearly knew her onions. Or grapes.

Apparently there are 450,000 vines for every adult who lives in the Marlborough area. Remember that next time it’s quiz night down the local. The grapes are picked in March or April and the vines are not watered for the last week before picking to make the juice more intense. The Sauvignon Blanc grapes are harvested by machine, unless they are destined to be a special reserve wine, but Pinot Noir is picked by hand and at night, which must be a bit tricky. 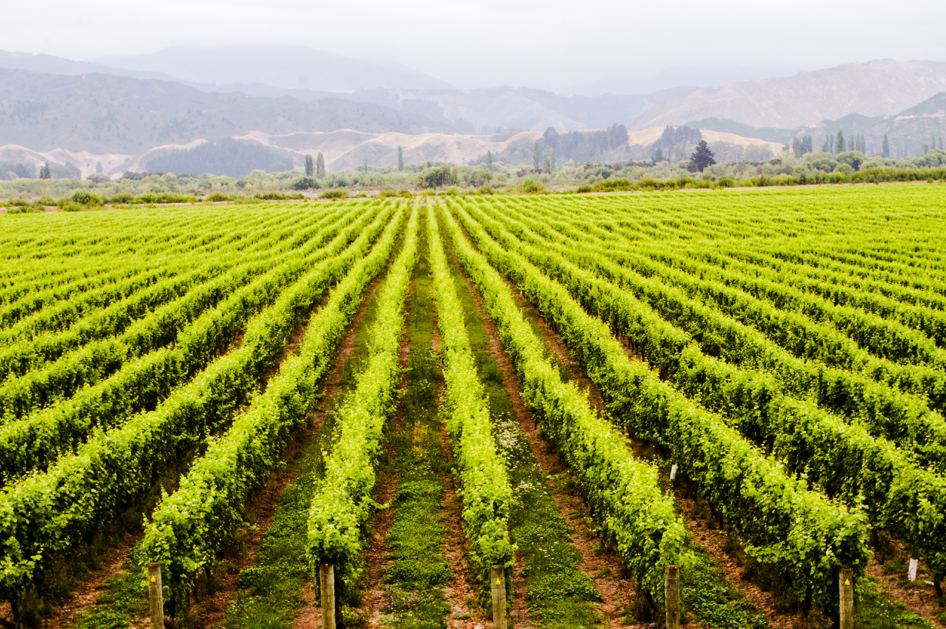 It’s a high tech business, winemaking, and you could see the huge shiny steel vats in the production unit next door. At this time of year they were just beginning to gear up for the 2016 harvest and the first job would be to thoroughly clean all of the vats and equipment. And then, ten weeks after the grapes go in wine magically comes out. Just like that.

And, just like that, Nicky produced some rather wonderful wine to taste. She explained all the characteristics of the various styles of wine, going from the standard, though rather excellent, Sauvignon, to intense Pinot. And, yes, you could taste grass in one and gooseberries in another but, lets be honest, it’s more a case of “yes, that one’s pleasant but this one is superb” for non wine snobs like us. We just know what we like not what we should like.

Marlborough produce wonderful sparkling as well as still wines. These are made in the classic champagne method but cannot, of course, be called champagne so Marlborough has its own cuvée method appellation. Nicky produced a lovely Brut which could match many a French champagne but the undoubted star of the show was a gorgeous Vintage Rose cuvée which simply tasted of summer. 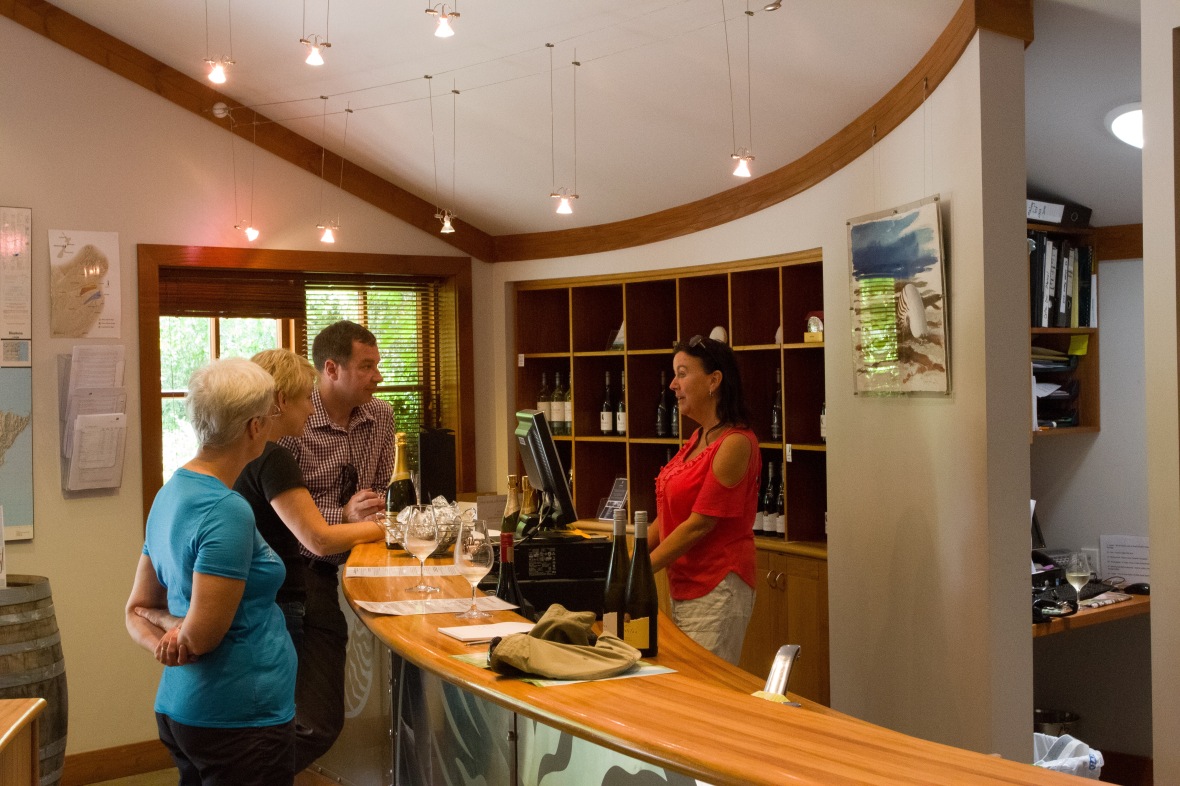 The fascinating Nicky at Nautilus

Now, being on foot there was no way we could buy any wine so we just marked the card and told Nicky we would return the ‘morrow. Bidding her adieu, we strolled the 75 metres separating Nautilus from Giesen and walked up to the tasting counter. This time we had more of a purpose because Nicky had told us that Giesen have a restaurant, as do many wineries, where they served an excellent and not too expensive wine maker’s platter. So we were only at the tasting counter to sample and choose our glass of wine for lunch. Honest. We chose a Viognier and the aforementioned platter which turned out to be just as delicious as promised. 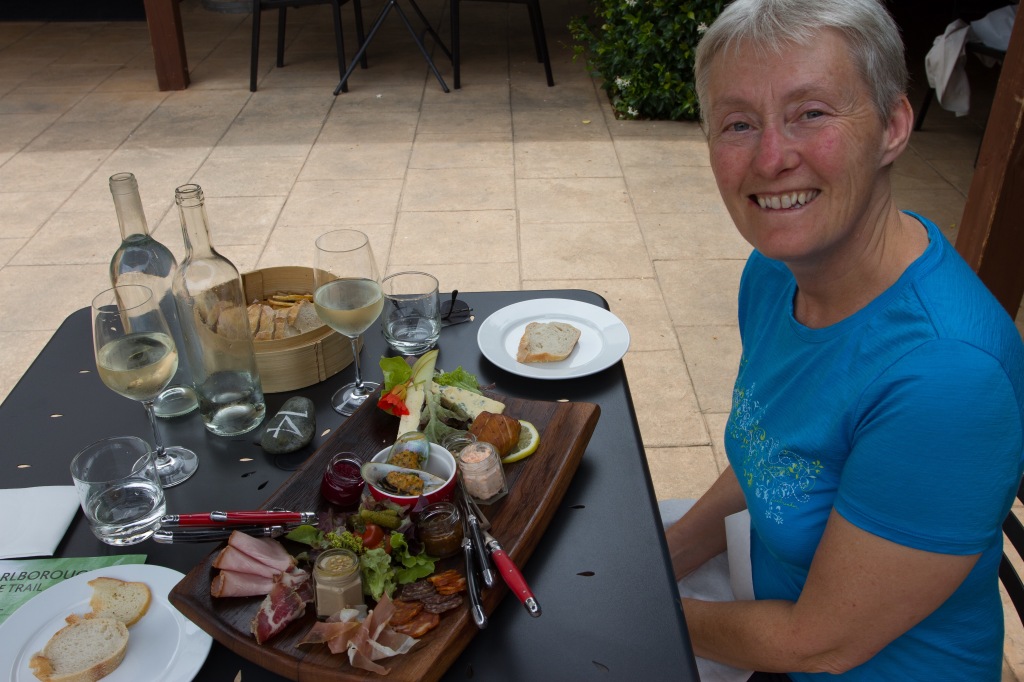 So, after a leisurely lunch it was out into the warm sunshine, cross the road, walk back another 75 metres and there was Wairau River. No, not an actual river but another winery. Another tasting, more marking the card and, since we had already had lunch and it was now getting on into the afternoon, how about a pavlova and a glass of that delicious dessert wine. Just the job.

And so, it was time to wend our way home to our house in Condors Bend Road (make of the name what you will). But on the way we were waylaid by a passing winery, Framington, not a wine with which we were familiar. Perhaps we may have been a little tired by this stage but we found their wine to be a bit too rock and roll, and pricey to boot so we hoofed it and were in sight of our little pied-a-tierre when we were intrigued by a sign for the Bladen winery. Whereas all the other wineries had been on the road this one was set well back and it was a pleasure to wander down the long drive amid all the vines.

Bladen is a very small affair, rather different from the other rather slick offerings. This one was very laid back and the owner was on hand to discuss matters vinious. We decided we liked the Gerwertstramminer and, as it was definitely our last wine tasting of the day, we took a bottle there and then. So now we faced a long trudge down the drive, along the road and up the drive to our own house. But Mr Bladen (I don’t think that was his real name) had a better suggestion. Why not go down that row of vines there, hop over the fence at the end, turn right and there will be your cottage. And so we ended our day wandering down our ‘home’ vineyard. Nicky at Nautilus had revealed that she owned a row of vines of her own, grown on a vineyard, and had her very own wine label for private consumption. She ships half back to the UK for her family and keeps the rest herself. She works with a vintner to produce her very own unique Pinot Noir. Hmnn. Now there’s a thought. I can just see the label now – a drawing of a virile Merino Ram against the backdrop of a snow encrusted mountain: RAM -Sauvignon Blanc – Reserve 2017 – Marlborough. 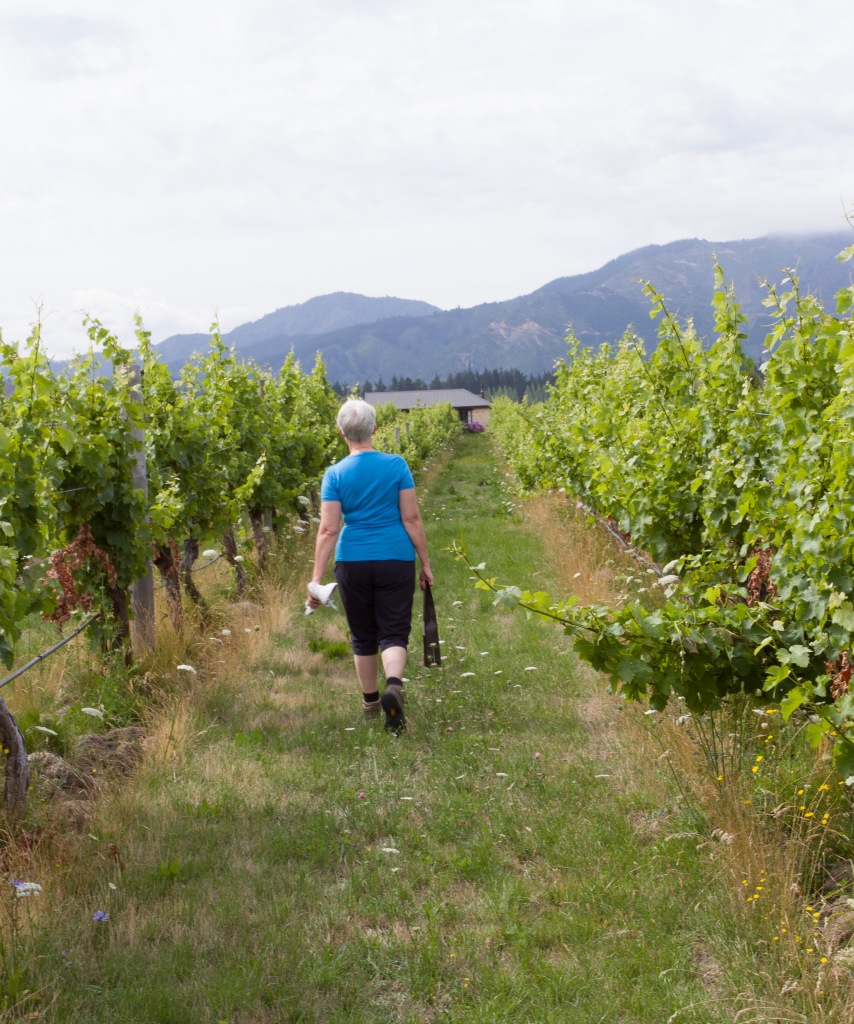 Going home at the end of a long, hard day

The following day, of course, we had to revisit our favourite wineries, by car this time, to buy the wine and they all seemed delighted to see us, surprisingly. We needed some fruit and drove out to a fruit farm, passing on the way Saint Clair, another favourite wine of ours. Well, who could resist a quick tasting and a selection of a couple of bottles to take with us on our way down to the south. After all, it’s a desert down there, everyone knows that. Bill, who owned the vineyard and cottage at which we were staying generously gave us another couple of bottles for being understanding about the dishwasher breaking down so we now had plenty of supplies. It’s a tough tough life in Marlborough but I could happily live here. It’s just that my liver couldn’t!

For the record, Jane would like it to be known that at a wine tasting you get little more than a thimbleful* of wine and we did share many of the tastings. Just in case you were getting the wrong impression about our sobriety.

*though it does depend on the size of your thimble.