Once more we found ourselves driving down an aisle in Majestic Wine warehouse; Brancott Estate, Fairhills, Wither Hills, Two Rivers. Virtually every winery we passed had supplied us with a bottle of wine at some point in the past. But we were now concentrating on the Marlborough Sounds. Unlike the famous Milford and Doubtful Sounds, which are not sounds but fjords formed by glacial activity, Marlborough is a true Sound – drowned river valleys now filled with sea water. It is an area of tree smothered hills forming long arms, countless bays and inlets, tidal marshes and narrow, twisty tracks. In fact, the coastline, made up of the various peninsula, bays, inlets and islands which comprise the Marlborough Sounds, accounts for 20% of the whole length of the coastline of New Zealand, which is astounding.

We based ourselves for the first four days in the town of Picton where ferries from the north island dock. Tides of people, cars, camper vans, bikes and tour buses wash up in the town. Those arriving from the north island tend only to stop briefly before heading either west towards Nelson and Abel Tasman or south towards Kaikoura, Mount Cook and beyond. Those arriving to take the ferry back to the north are probably more inclined to stay overnight.

Despite the hordes who pass through Picton, it’s quite a relaxed little place with some good cafes and eateries and a lovely harbour full of motor boats. It also has probably the best bakery in New Zealand, certainly in the South Island. We are lovers of good bread and it is quite hard to find a decent bread shop in the country. Pies, yes, but good quality wholemeal bread, no. It often looks nice, smells nice but when you bite into it you get a taste of soggy cardboard in your mouth. Where did all the proper bakers go (and butchers, and fishmongers, greengrocers, dairies)?

Our home in Picton, No 1 Leicester Street, really was a home. Gayleen and her husband move out when guests move in and go and live in a caravan! No 1 is a large family home so quite how they manage in the caravan is anyone’s guess. We felt as though we should invite them to come and stay in their own home!

Leicester Street backs onto a large park area, Victoria Domain, which has several biking and walking tracks. One of these will take you out to The Snout with views of Waikawa Bay and Queen Charlotte Sound which, even on an overcast day, looked very impressive. The ferry from Wellington enters the Queen Charlotte Sound via Tory Channel and this is the sound which most visitors see when they motor down the Queen Charlotte Drive between Picton and Havelock. It’s a lovely route with many a twist and turn going from high on the hillsides to right by the water’s edge, by secluded little bays with a few houses and a lot of boats.

But there are two other main sounds; Pelorus Sound and Kenepuru. The latter we would keep for later in our visit but the best way to visit Pelorus Sound is by going on the mail boat cruise. A boat runs 52 weeks of the year, three times a week to the remotest reaches of Pelorus Sound taking mail and supplies. In the summer months it takes on board passengers who subsidise the service to the extent that it wouldn’t exist without them. And it does provide a lifeline to some very remote communities. We joined the Friday sailing which goes out to the very furthest reaches of the sound.

It was a rather overcast day and you couldn’t see the top of the mountain as we sailed under them but our captain, Jim, and his sidekick Bindi, gave us a running commentary and told stories of the people who lived and worked in the sound. Jim hails from Scotland and sounds almost exactly like David Tennant (of Dr Who and Broadchurch fame). Jim used to be an airline pilot but got fed up of the routine and now runs the mail service in all winds and weathers and clearly enjoys every moment.

We saw several boats laden with huge bags of Greenshell mussels. Farming mussels is a huge industry in New Zealand and earns $200+ million a year. You need very clear water for these bivalves and the Sounds are an ideal location with very little agricultural run off from the land or other pollution, calm waters and nutrient rich seas. Mussel spats are the very tiny larval stage of the adult mussel. They attach themselves to seaweed and are collected in only two locations in New Zealand, one of them being Ninety Mile Beach up at the very top of the North Island.

The spats are transported to the mussel farms within 24 hours where they are tucked into long cotton stockings which are attached to ropes dangled in the water by means of rubber floats. They grow for about 6 to 8 months on a nursery line and as they grow they start pushing other mussels off the line. So the farmer drags the ropes through a steel ring which pulls off the mussels and he re-seeds them but in fewer numbers with larger spacing giving the mussels the chance to grow further. This will happen several times and the mussels may be 18 to 24 months old before they are harvested for sale. Our skipper brought us up against a farm where a specially adapted boat was doing just this so we spent a happy few minutes watching a couple of workers going about their task. They didn’t seem to object to 40 or so tourists watching as they manhandled the ropes of mussels.

But, fascinating as mussels are, we had post to deliver and Jim made his way to the first drop of the day. We bypassed many of the inner sound houses and settlements because these are delivered to on Tuesdays and Thursdays. We made our way past Maud Island to our first drop of the day at Tui Lodge, which is an eco tourist resort. Here the owner and her daughter were waiting at the jetty to receive a drop off of supplies and post and to hand over items in return.

When the area was first settled there were over 200 hundred families who were granted land in Pelorus Sound. Now there are only 44 families living there permanently, though, like everywhere else in the area, there are plenty of holiday homes owned by New Zealanders and foreigners. The children who live out here are mostly home schooled and then go to boarding school as they grow older.

Many of the families who live here have been here for generations, their forebears being granted land which they cleared for agriculture. It must have been a hard life out here with only their own resources to rely upon. Now, most, though not all, places are connected by roads, albeit difficult to access, electricity and landlines, though not necessarily mobile phone. Agriculture has largely died out because the subsidies which were granted have been removed making livestock farming uneconomic. The former pasture land is now returning to native bush and tourism and fish farming are replacing cattle and sheep farming.

Our next port of call was to another tourist lodge and here the family’s dog paddled down to the jetty, followed by the lodge owner, followed by the pet pig waddling onto the jetty! It seems that the postie not only brings post and supplies but also little treats for the dogs and any other pets. Much to our amusement Bindy proceeded to feed treats to both dog and pig whilst Jim chatted to the owner, presumably bringing the latest gossip from that den of iniquity, Havelock. I suppose that much the same thing goes on in many island communities where regular contact with the outside world comes from whatever boats make it out there, be it the post service or whatever. At one time the Sounds had their own travelling doctor but now if someone gets sick they can be airlifted to the mainland. And although the land on which these communities live is actually connected to the mainland it doesn’t feel like that when you sail around them.

We spent the rest of the day cruising between settlements or individual houses, from the upmarket lodge where a night in the villa will cost you 2,000 euro, the lonely house where we counted a man, his wife, baby and at least 7 kids all under the age of 12 who waved madly as we departed, to the 89 year old Bill, who lives on his own at the furthest reach of the sound, with only self generated electricity and tenacity of spirit. And in between we passed beautiful, remote bays and inlets, channels, rocks full of King Shags and wide, empty spaces. It was a great trip and Postman Jim, who sadly didn’t have a black and white cat, handed us a postcard as we left which we must fill in and send back to him. 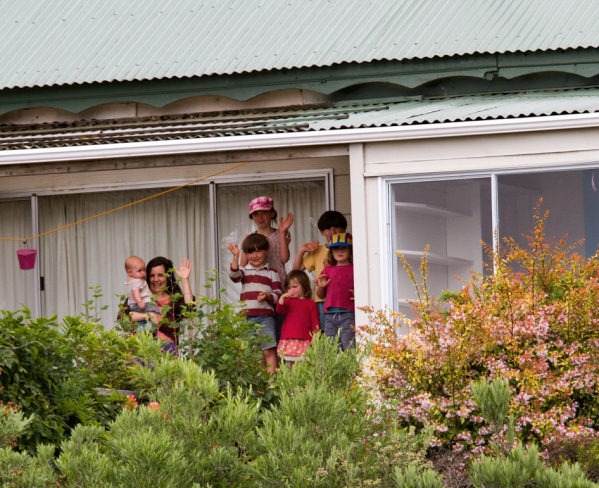 When we returned to port we just had to go into the Mussel Pot restaurant for a huge bowl of steamed green shell mussels. And they were delicious.
By now we had been in Picton four days which was enough time. The weather was still a little cool and overcast but the forecast seemed to indicate that everywhere else in the South Island would be much the same if not worse. So we decided that we would stick around the sounds and explore the walking tracks and country roads that abound there. But more of that next time

Dramatic skies out on the Sound