From Fox Glacier we were travelling to Glenorchy, near Queenstown and so made our way back over the Haast Pass, whizzed by Makarora and by the beautiful Lake Hawea. We just clipped the outskirts of Wanaka as we took the Cadrona Valley Road. This is an alternative to the main route to Queenstown and takes you through a valley and up to the ‘historic’ town of Cardrona, a sort of wild west looking place with a clapboard hotel from which you might expect Jesse James or Wyatt Earp to emerge. As if that wasn’t enough, just before you enter town you come across a farm fence with hundreds, maybe thousands of brassiers attached to it. 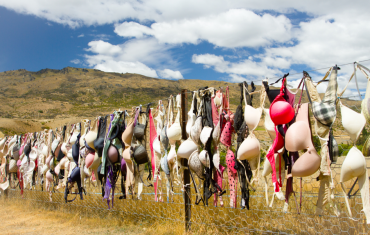 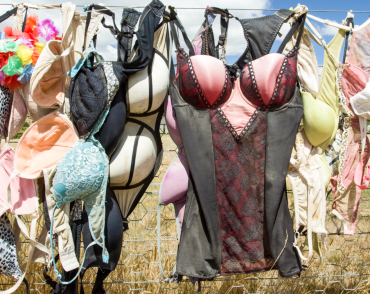 The story? Well, it seems that the lady who farms here got breast cancer, had a mastectomy and, as her old bras were no longer suitable, hung them on the fence near her house. I guess it was a kind of ‘sod you’ statement. Well, before too long several more bras appeared, then more and more and more. So now there’s a collection box raising money for the Breat Cancer Foundation and it has raised thousands. Jane didn’t have a spare bra to donate so we just made do with putting some dollars in the box.

Moving on from Cardrona you wind your way though the mountain pass and are eventually rewarded with views of Queenstown and Lake Wakatipu. View down to Queenstown

Queenstown, self styled capital of adventure, is on every travellers’ list of places to go so we, of course, drove straight through it. We stayed there three years ago and a very pleasant place it is too but we wanted to get away from the crowds and out to the far reaches of the lake.

Wakatipu is a long, convoluted and narrow lake hemmed in on all sides by mountain ranges; the Eyre, Hector, Thompson. Ailsa, Humbolt and Richardson Ranges. Glenorchy lies at the western end of the lake at the mouth of the Dart river which rises way up very close to Mount Aspriring. It’s about as dramatic a location as you could want and we had always wanted to stay here.

Our bach turned out to be probably one of the largest we have every hired and from every room there were views of the mountains. It was a place so comfortable and easy to be in that you just wanted to sit there and take in the vista set in front of you. The mountains surrounding our bach

But we had come to Glenorchy not to sit and gawp at the view but to get out amongst the mountains and then gawp at them. There are many walking tracks around here, the most famous and popular being the Routeburn Track. It’s another of those 4 or 5 day treks taking you through the Humbolt Mountains and ending up on the road to Milford Sound, which as the crow flies, is less than 50 klms from here.

The first section is a relatively undemanding walk through woods beside a mountain stream eventually reaching an inter-montain area of grassland and the first of the many huts on the route. You might imagine mountain huts to be rudimentary affairs with no water or loos and the wind whistling through the gaps in the planking. I’ve no doubt there are some of these in New Zealand but Routeburn Flats hut certainly didn’t look cold or draughty, or leaky and smelly. In fact, it looked just the type of place you would want to spend the night if it wasn’t for the fact that, a) you hadn’t booked a bed, b) you didn’t have any bedding or food with you and c) you had a perfectly comfortable bach and cold bottle of wine waiting for you down below. Oh well, nothing for it but to return by the way we’d come. 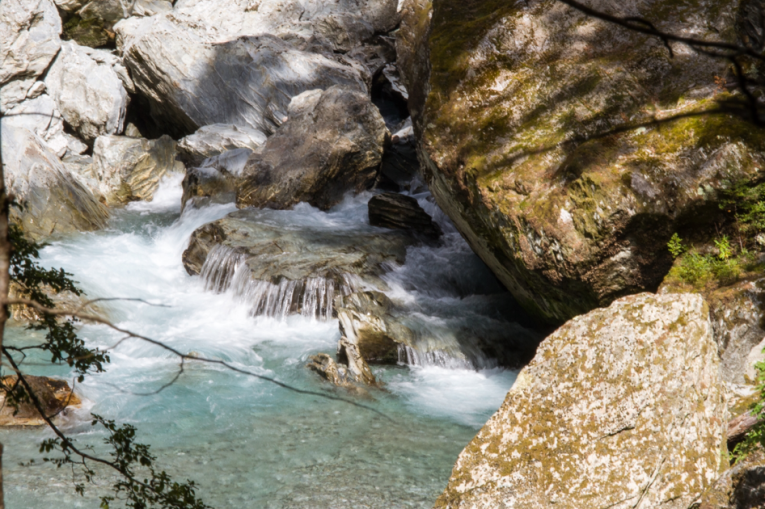 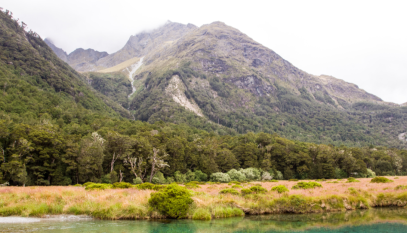 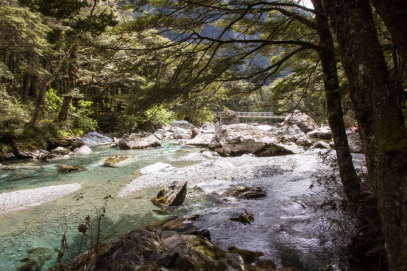 The mountain scenery around Glenorchy is truly spectacular and it’s no surprise that film crews regularly descend on the place. Quite a few scenes in Lord of the Rings were filmed here. Peter Jackson was so taken with the light streaming through the forest around Paradise (that really is the name of the place, I kid you not) that he used it to represent the enchanted forest of Lothlorien. Only in the book the leaves on the trees are said to be golden not green so he got a bunch of school children to paint the leaves golden and then strew them about the forest floor. The leaves that is, not the children. The kids were too exhausted from their labours to do anything but crawl under their desks and sleep. 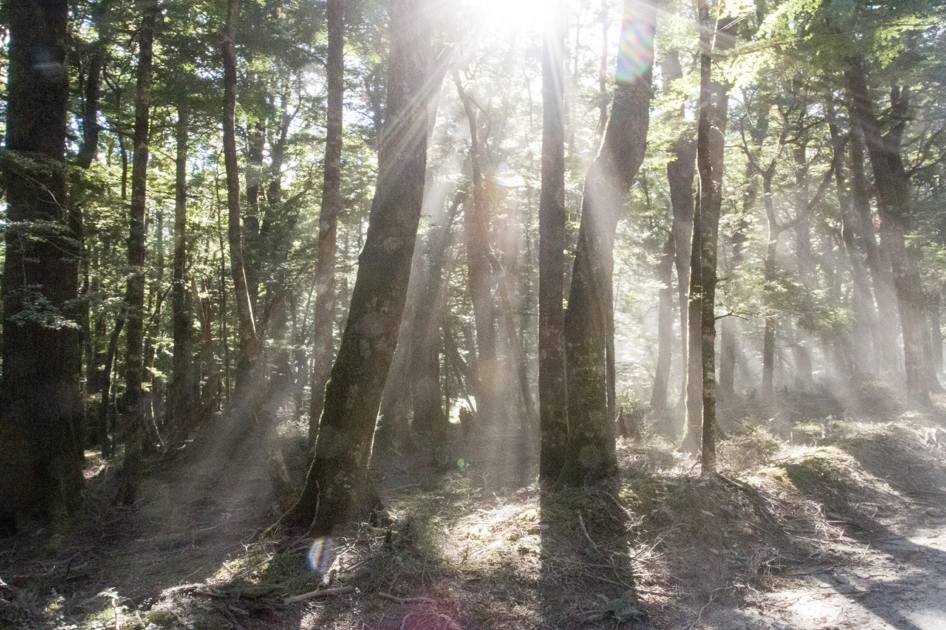 But it’s not only fantasy movies which have been shot here. Apparently, documentaries like Wolverine have been filmed extensively in the area. I haven’t seen Wolverine but I suppose it features Wolves, doesn’t it? And then there’s Top of the Lake, a TV crime thriller which I did watch and wished I hadn’t. If you didn’t catch it don’t bother looking it up on Sky Gold. It was wierd and I still don’t know what the hell it was about. Nice scenery though.

Anyway, what I’m trying to say is that the scenery around Glenorchy is magnificent and you can drive along gravel tracks that take you to the back of beyond, walk to old gold mines and get stunning views of the Dart River and Mt Earnshaw. Or you can jump on a horse and go for a little trek. Jane had never ridden a horse before but she was determined to have a go and where better than in Glenorchy surrounded by all that space.

So, we pitched up at Dart River Stables to be measured up for hard hats and asked how many times we’d ridden. Which I think is a bit of a personal question myself but I marked myself down as a C; reasonably experienced.

After a tour of the area by landrover by an ebulliant Irish lad, whose knowledge of Wolverine was somewhat more extensive than mine, we arrived at a field with some quite friendly looking horses in the paddock. These really were horses not those fat little Welsh ponies you go trekking on in the Black Mountains (which in New Zealand would be hillocks not mountains). It seems that the pairing of rider to horse is quite an art, not least because the horses within a cohort form attachments and are happy to walk nose to tail with one horse whilst they would be likely to bite the backside off one they don’t like. I suppose it’s a bit like, say, ballerinas in a corps de ballet. Not that they bite the backsides off one another, you understand.

Since Jane and I would ride together we needed two horses who are, if not in love exactly, simpatico. And it seems that Monty and Cruze are two such horses. A little nervously Jane stands on a mounting box whilst Monty is led up to her. Left foot in stirrup, swing right leg over and up you go. And there she was, sat on an animal which up to now she was wary of to say the least. And looking pretty comfortable, actually. 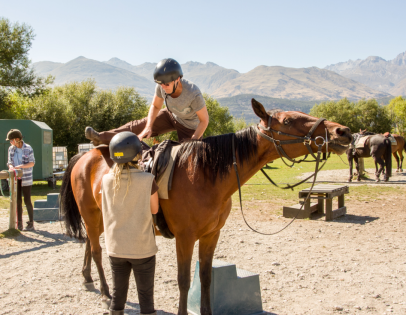 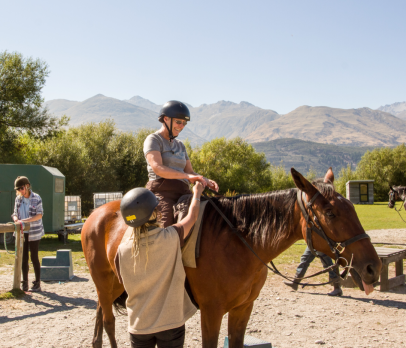 Most of the horses here are Arab cross but there are a few whose ancestors came over with the first settlers and these tend to be sturdier breeds. Many of the latter were used in Lord of the Rings filming and the stable has a few ‘stars’ amongst the 70 or so horses it keeps. Monty and Cruze, both boys, were just standard Arabs but quite charming and docile.

So stirrups adjusted, off we all go (there were 8 of us tourists) walking through the fields in a well mannered line. Now, Riders of the Rohirrim we were not, but for me it was rather nice to be in the saddle again. The last time I rode would have been on Graig Goch farm in Wales back in the 70’s but I was quite relaxed and enjoying the surroundings. As was Jane. Given that this was her first time ever on a horse she took to it with aplomb and looked perfectly poised and happy. I’m not saying we’re suddenly going to have a go at being gauchos in Argentina or cowboys in Montana but it’s another first to add to our activities this time around. 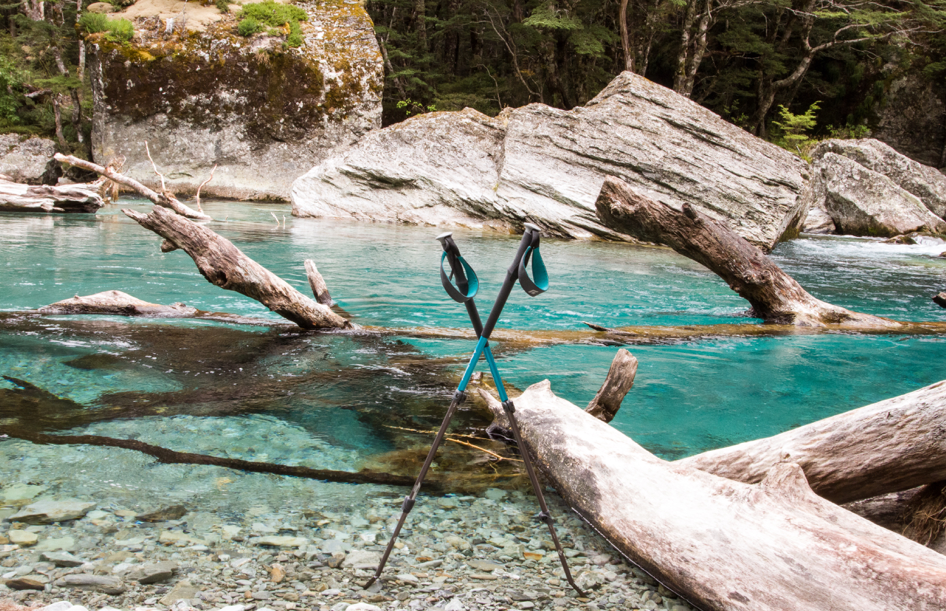