We could happily have stayed a few more days at La Selva but this was the end of our six day birding trip. We had to get to Pavona to catch a boat and Johan had to get back to Quepos to see his family, pick up a minibus and start a tour the next day with 6 new people. It’s hard work being a birding guide. On the drive to Pavona we discussed many things; family, economics, world events and missing friends. We all had a quiet few moments remembering Roy Orozco, Joahan’s business partner and fantastic birding guide, photographer and artist. Roy sadly died a few weeks before we came to Costa Rica.
But we couldn’t stay down for long. By the time we had left the towns and busy roads behind we were spotting birds again, all of us eager to add to our tally for the trip. Johan kept stopping the car in unlikely places and pointing out new birds. But all too soon we were in Pavona at the boat dock and had to bid farewell to our new found friend. We told Johan that if he comes to the UK in August for the Bird Fair held at Rutland Water he can come and stay with us and we’ll take him out to see some British birds. Plus he’s intending leading a trip to Ecuador next year so maybe we’ll join that.

Our destination now was Tortuguero and we jumped aboard the public boat for the trip down the Tortuguero river. We were told that because the river is low at this time the journey could take up to two hours. There are two ways of getting to Tortuguero; by ‘plane or by boat. The public boat service, whilst being the cheapest option, is, perhaps, the least comfortable chiefly because you’re stuck in a hard plastic seat for the whole trip. Those of you who know me will be aware that my bum ain’t exactly well padded so by the end of the trip my derrière was a little sore and tired, just like me.

But all that disappeared when we were met at the dock by Luis. It transpired that there were a few of us on the boat who were staying at the Aracari Garden Hostel but it was my bag that Luis hefted onto his broad shoulders as he lead us to the property. He’d obviously marked me down as the oldest and feeblest one among the vistors. But, do you know, I’m beginning to appreciate that growing older isn’t all bad news, although Jane was slightly miffed that she was expected to carry her own bag!

We last visited Tortuguero 22 years ago when we took a tour out of San Jose, staying in one of the lodges that are dotted about, just outside the National Park. At the time this was the only sensible option. The village that existed then had very limited  facilities – well water, an electricity generator switched on for only a few hours at night and a very limited choice of accommodation. Now there are plenty of options for places to stay and to eat and so we chose to stay in the village at Aracari Garden Hostel rather than the plusher and more exclusive lodges. And it was the right decision because we were contributing to the local economy and we were right in amongst ordinary village folk. Plus we got to meet fellow travellers which we really enjoy doing. Aracari Gardens is run by the very helpful Marina and Alejandro, helped by the delightful and informative Sylvia who hales from Holland.

Tortuguro village lies on a narrow spit of land with the Tortuguero river on the west side and the Caribbean coast on the east. 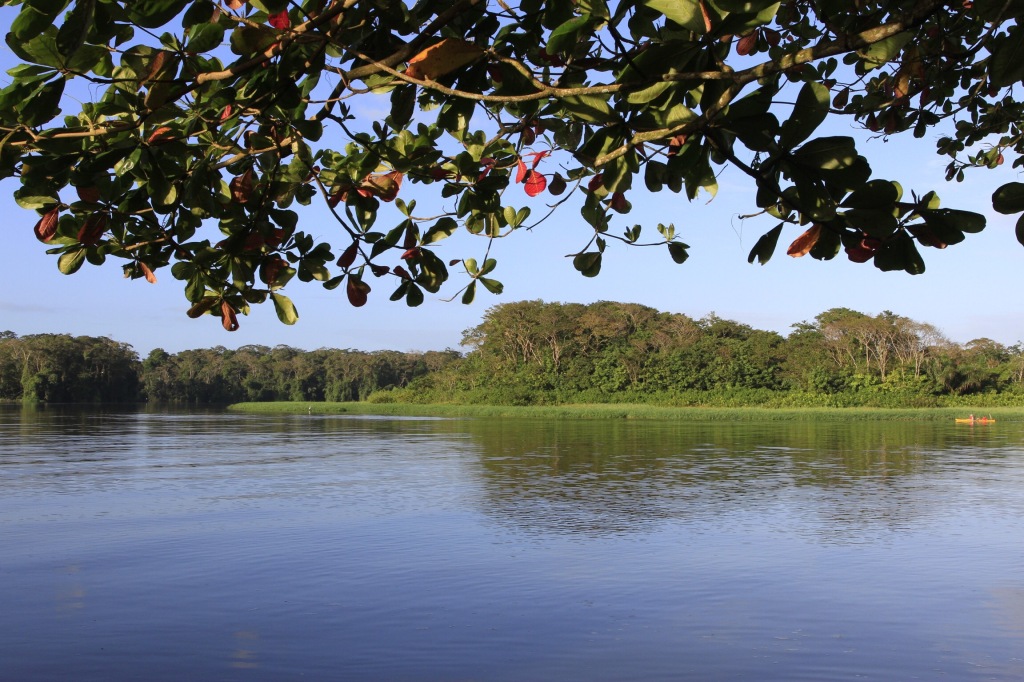 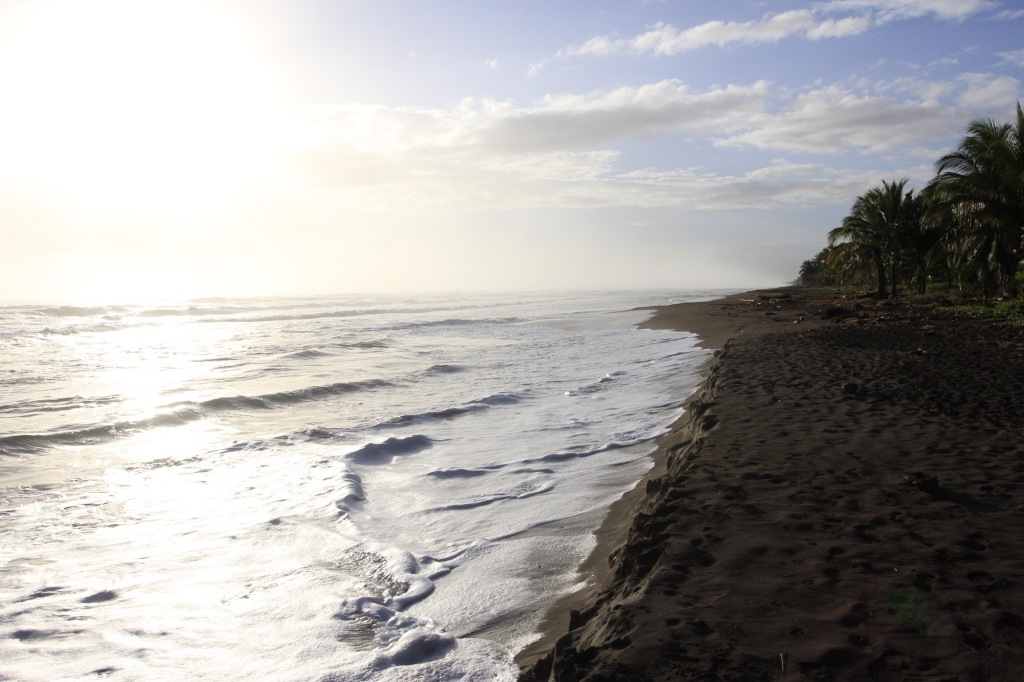 The river is the gateway to the series of canals, lakes and lagoons which occur in this watery heaven. It is one one of the most important wetland areas in Costa Rica and a Ramsar site of scientific importance.Sylvia booked us a canal tour for early the next morning and it was here that another advantage of staying in the village became apparant. Most tours offered by the lodges use motor boats and the use of motors is strictly controlled in the national park so these tours can only visit the larger waterways. But from the village you have the opportunity to take a paddle canoe tour with a professional guide. Much more eco friendly, able to get up much smaller waterways and quietly get closer to the wildlife.

My new friend, Luis, was leading this tour. We’d been issued with life vests plus ponchos and seat cushions. I’m happy to report that the life vests weren’t needed but the rest was! There were seven guests from the hostel plus Luis and it happened that we occupied the last two seats, immediately in front of Luis. Now, a canoe may be good for getting up small waterways but it does require man (or, to be pc, person) power. So our five companions were issued paddles but not us. At the time I thought that this was because we were too close to Luis to be allowed the use of paddles.

Luis did most of the paddling and all of the steering from the stern of the boat but there were times, especially when backing out of a particularly tight space when he’d say “I need  your help now people.” in a lovely caribbean accent. And then our companions had to use muscle power. Luis was a keen and enthusiastic guide who brought us very close to the wonderful wildlife of Tortuguero. Aquatic birdlife abounds here and it was wonderful to be at eye level with it all. 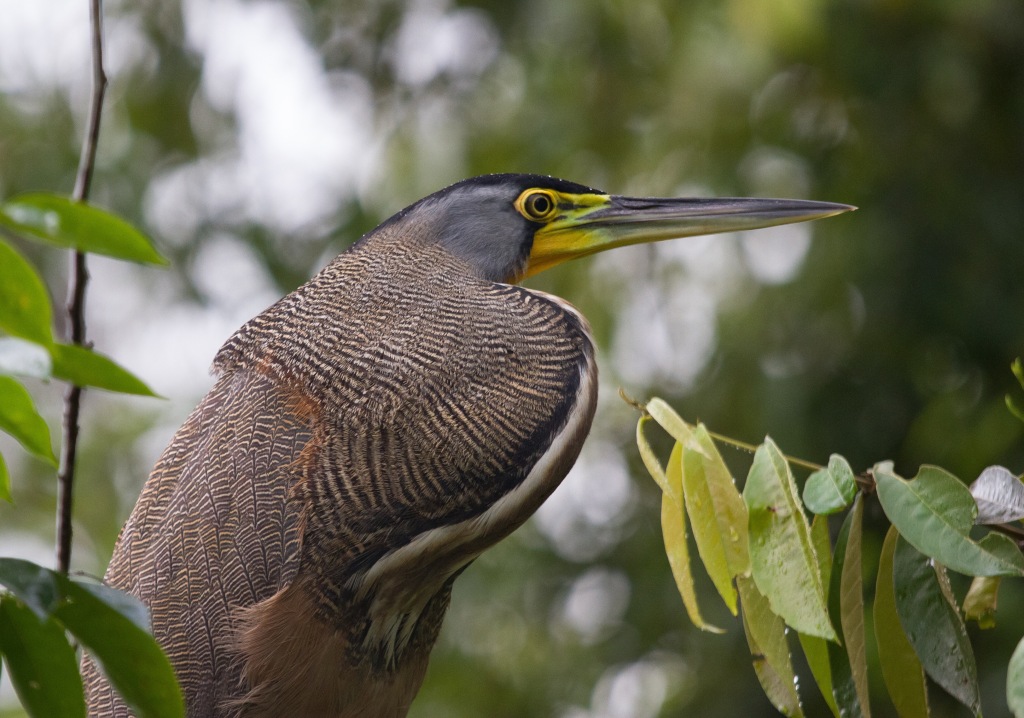 A particularly wonderful spot was this tiny Sun Grebe lurking in the shallows.

There was also a cayman keeping an eye on things just to make sure you didn’t think about taking a quick dip in the water! 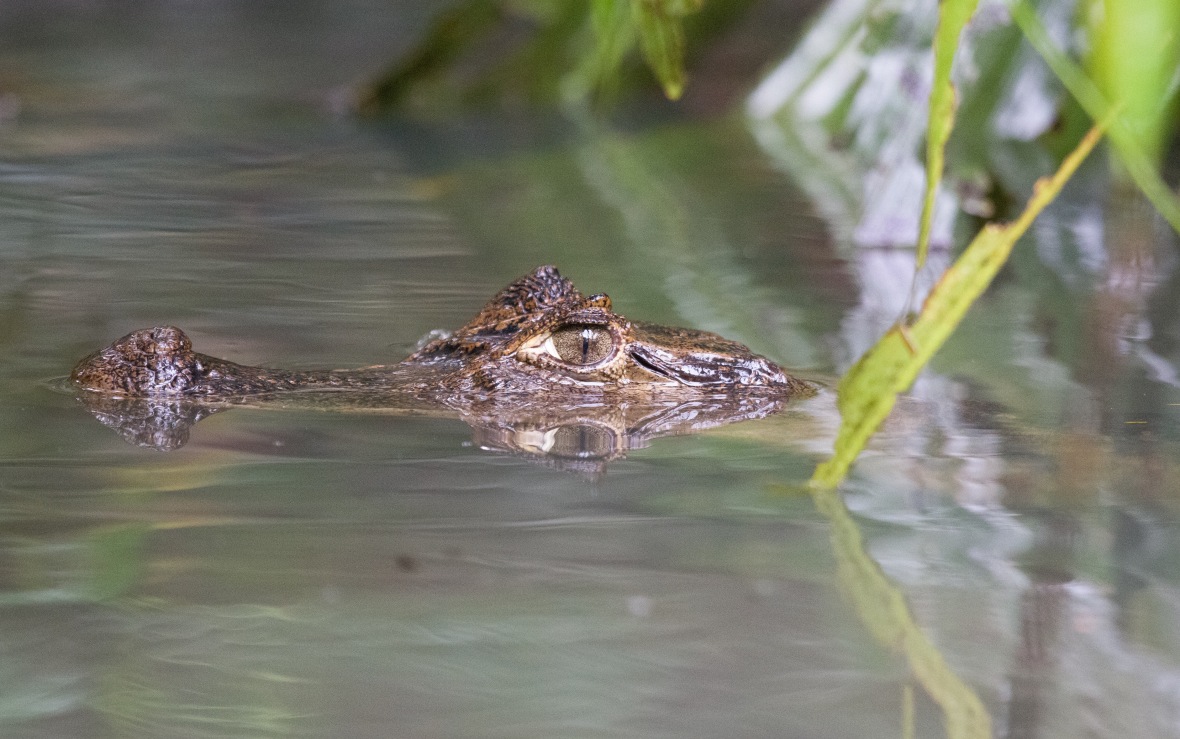 The trip was slated to last 3 hours but so enthusiastic was Luis that he kept us out well beyond that time. Nobody complained, even when yet another rain shower got us all donning rain gear and covering up cameras and binoculars. It was as we were returning from our long trip with a rather tired captain that all the extra rowing power was needed and at this stage Luis perhaps revealed why we had been placed at the back like lord and lady muck whilst our companions did all the hard paddling work. He asked us all our names and what we did for a living. Benjamin was at the front and was a pilot whilst his partner worked for the same airline and was Spanish. Monika was a tv producer and had worked on the German equivalent of Pop Idol. Sebastian and Monique were also German; he a software engineer and she a dental assistant. That just left us, the ones who had sat in the stern spotting birds and animals, monopolised the conversation with Luis and who hadn’t had to break sweat once. “What did you used to do?” asked Luis. “How did you know we weren’t working?” asked Jane. “Well,” Luis replied, with a smile, “you’re so old.” At this the whole boat erupted with laughter and we spent the rest of the trip laughing at our expense. It was great.

There was one animal that even Luis was not able to show to us – the Jaguar. Scientists have, according to Luis, counted 34 individuals within the national park.

“How do they know this?” asked Luis.

“That’s exactly right, sir. But do you know how they attract Jaguars to the camera traps. By spraying them with perfume. And do you know what perfume works best?”

I think we were all reeling from the idea that you could entice a very big cat to a photographic device by spraying it with perfume so I didn’t think quick enough to suggest Lynx. “It’s Chanel No 5” said Luis. What amused me was the idea of some bearded scientists raiding their mother’s/wive’s/girlfriend’s/daughter’s (or in the case of non-bearded female scientists, their own) handbags in search of a perfume that would, presumably, best replicate the scent of an ovulating female cat. I’m sure that Coco Chanel would have been turning in her mausoleum.

Back on dry land we decided to walk into the only bit of the national park which doesn’t require a boat. We hadn’t expected to meet two of our redoubtable rowers there – Sebastian and Monique. I think that they had cottoned on to the fact that we knew a thing or two about spotting wildlife because they asked if they might tag along with us. We did explain that we tended to take ages just covering 500 metres because we were constantly on the look out for birds and other wildlife but they were obviously keen to learn from their elders!

Actually, we got on really well with Sebastian and Monique.. Like us they enjoy travelling and I must admit that they did rather remind us of what we were like when we were in our mid to late twenties. All that enthusiasm and get up and go. In fact Monique is about to start a new job when she gets back to Germany and she was clearly really looking forward to it.

We managed to find some great wildlife for them – Capuchin and Howler monkey, woodpeckers, trogons, hummingbirds and parrots, including the Great Green Macaw which obliged us by perching in a low tree eating fruit. In the heat, we were all a little tired by the end of the walk, including the youngsters. Mind you, they did have the excuse of having only recently arrived in Costa Rica so they were still getting over their jetlag. 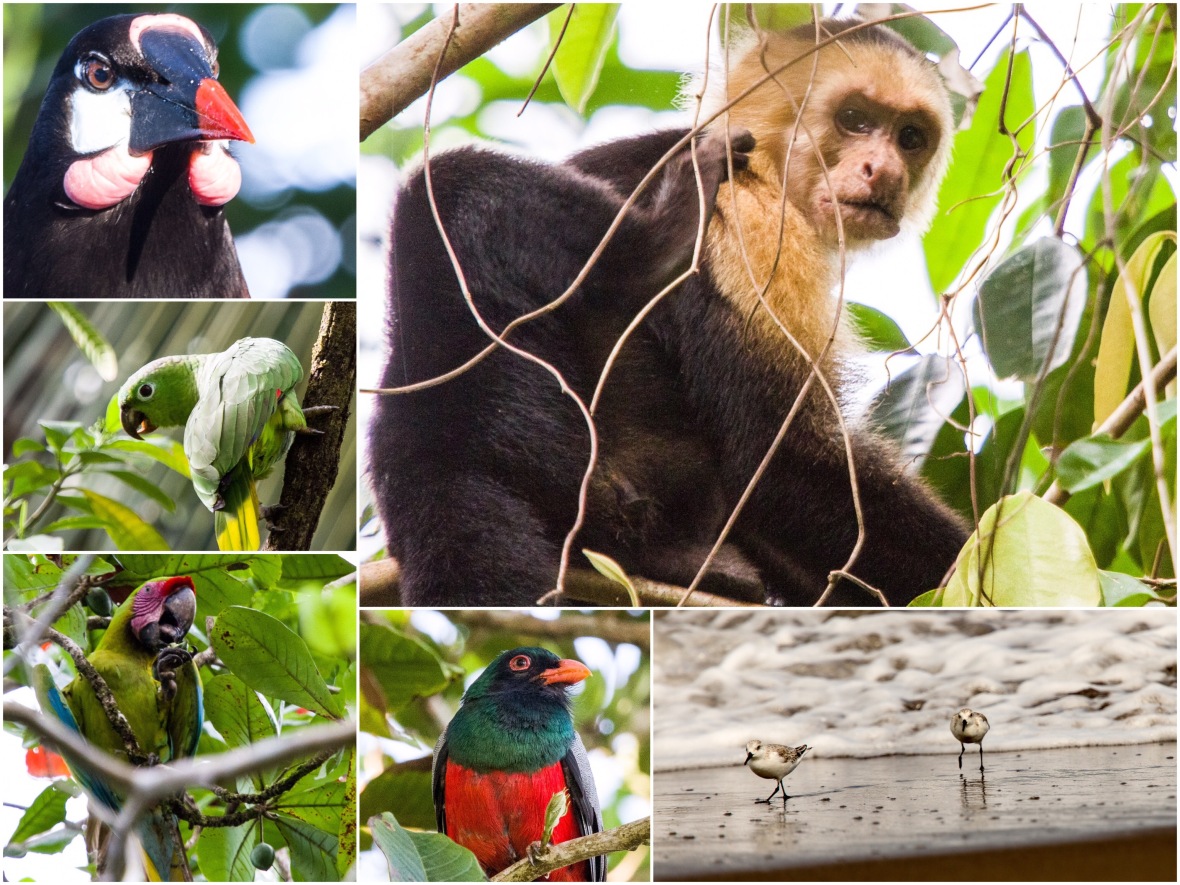 We really enjoyed our return to Tortuguero and were very glad that we stayed in the village rather than a lodge. We met all sorts of people at Aracari Garden Hostel  from all parts of Europe. The staff there were excellent and the village had plenty of choice for places to eat and a relaxing feel to it. And we added to our growing list of species seen. So, on to our next stop -Cahuita.

4 thoughts on “Have boat, will travel”