We discovered that, instead of returning up the Tortuguero river to Pavona and making a long bus journey to Cahuita, you could take a boat south down the coast to Moin, the port for Limon, and then get a transfer from there. This was going to be a much more interesting journey so we got the ever helpful Marina to organise it for us. We had expected that this would be a sea journey but when we saw the boat we realised this was not the case. We hadn’t quite appreciated that, in this wetland area, the canals and rivers stretch all the way down to Limon so you don’t need to enter the sea at all.

Our boat, though no larger than the one we came in on, was at least more comfortable, which was just as well given that it would be a three hour journey with no guarantee of a loo stop! Though, as it transpired, we did pull into a small riverside restaurant about half way along because they were switching boats at that point.

We were so glad that we chose this way to travel because, once the drizzle cleared, it became a gentle journey through the wetlands with birds flying, forested banks, grasslands, farms and even sight of the ocean from time to time.

At Moin were were met by a car and driver and crammed ourselves into it together with a couple of Spanish girls travelling our way. It was a bit of a tight squeeze but we spent the journey chatting to one of the girls in the back of the taxi. The usual topics came up, travels, jobs, Brexit! Arriving at New Caribe Point we were met by Patricia and her husband Donatello. There is a huge Italian community in this area running everything from holiday letting to restaurants and I’m sure much else besides. 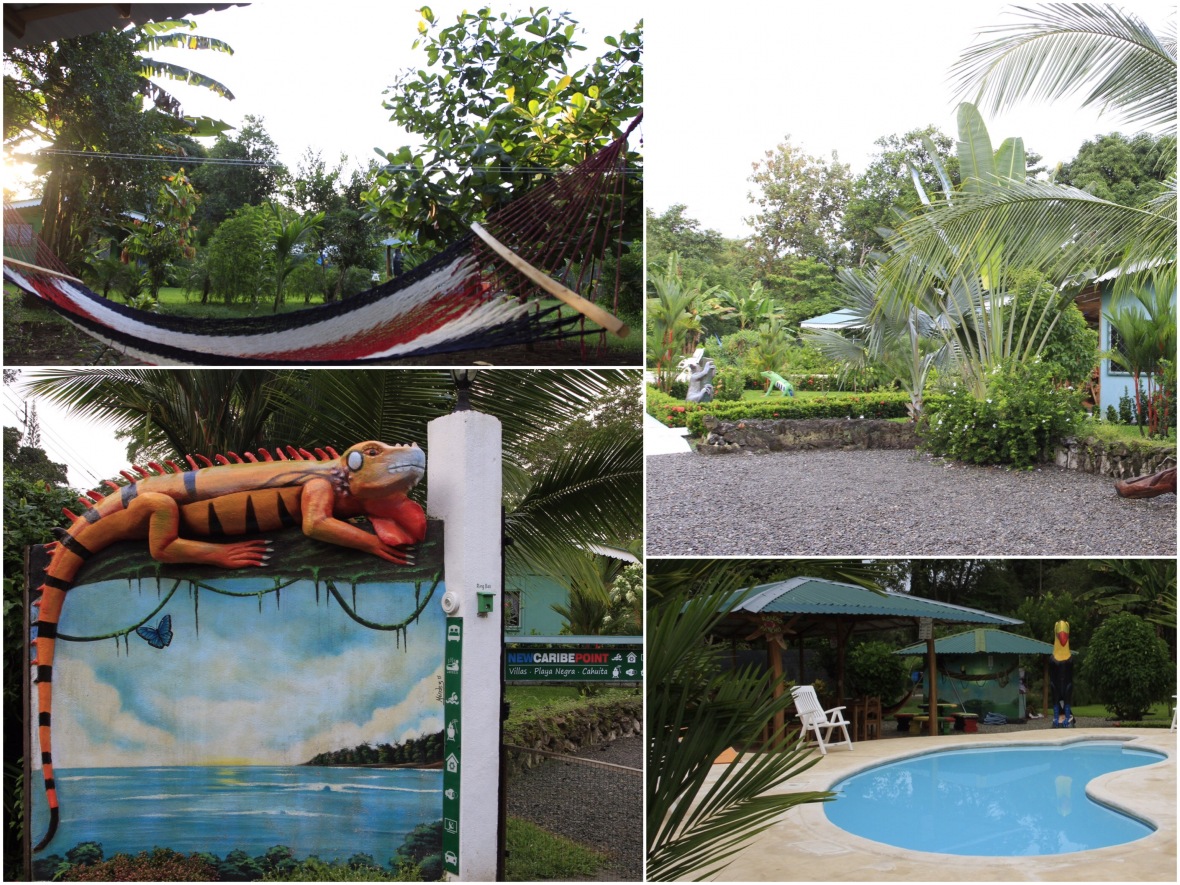 Our cabin became a lovely place to relax in after a hard day birdwatching or whatever. And there was nothing better than diving in the pool to ease our aching muscles, even when it was raining! And it rained quite a bit during our stay. At this time of year, whilst the rest of the country is in the dry season, the Caribbean coast tends to be wet. When it’s the wet season elsewhere, this coast is drier, though it is never fully dry -this is rainforest, after all. We noticed that it would often rain heavily at night and then when the sun rose the clouds dispersed, although it could shower at any time of day.

Caribe Point is close to Playa Negra which normally has some wonderful beaches but recent storms had brought in a huge amount of trees and other brash brought down the rivers. Locals and even some tourists were doing their best to clear up the mess but it looked like being a long job.

Cahuita is the gateway to Cahuita National Park which protects a narrow stretch of beach and forest running from Cahuita almost to Puerto Viejo further down the coast.

This is a very beautiful park with the crashing sea on one side and the forest on the other. The beaches are quite stunning and at Cahuita Point there is an extensive reef which you can snorkel but only if you hire a local guide because the currents in these parts can be very dangerous. We had brought our snorkel gear to Cahuita but the high waves and recent storms meant that the water was far too churned up to make snorkelling worthwhile and there were no trips being offered.

There are not so many birds in the park, perhaps because it is only a narrow strip of land, but there are plenty of animals, insects, amphibians, reptiles and even snakes. Among the mangrove roots we found a Northern Raccoon digging for crabs. 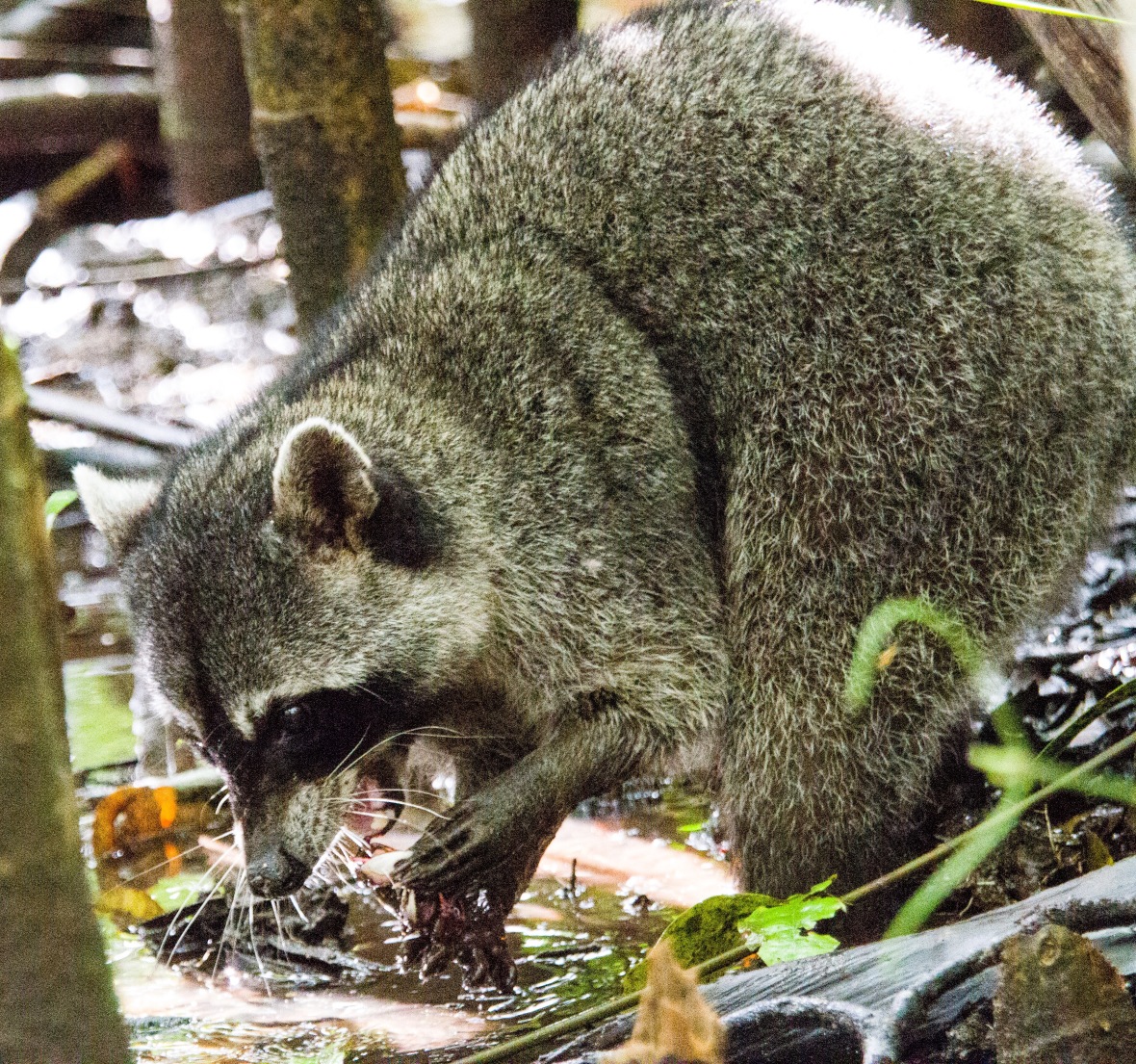 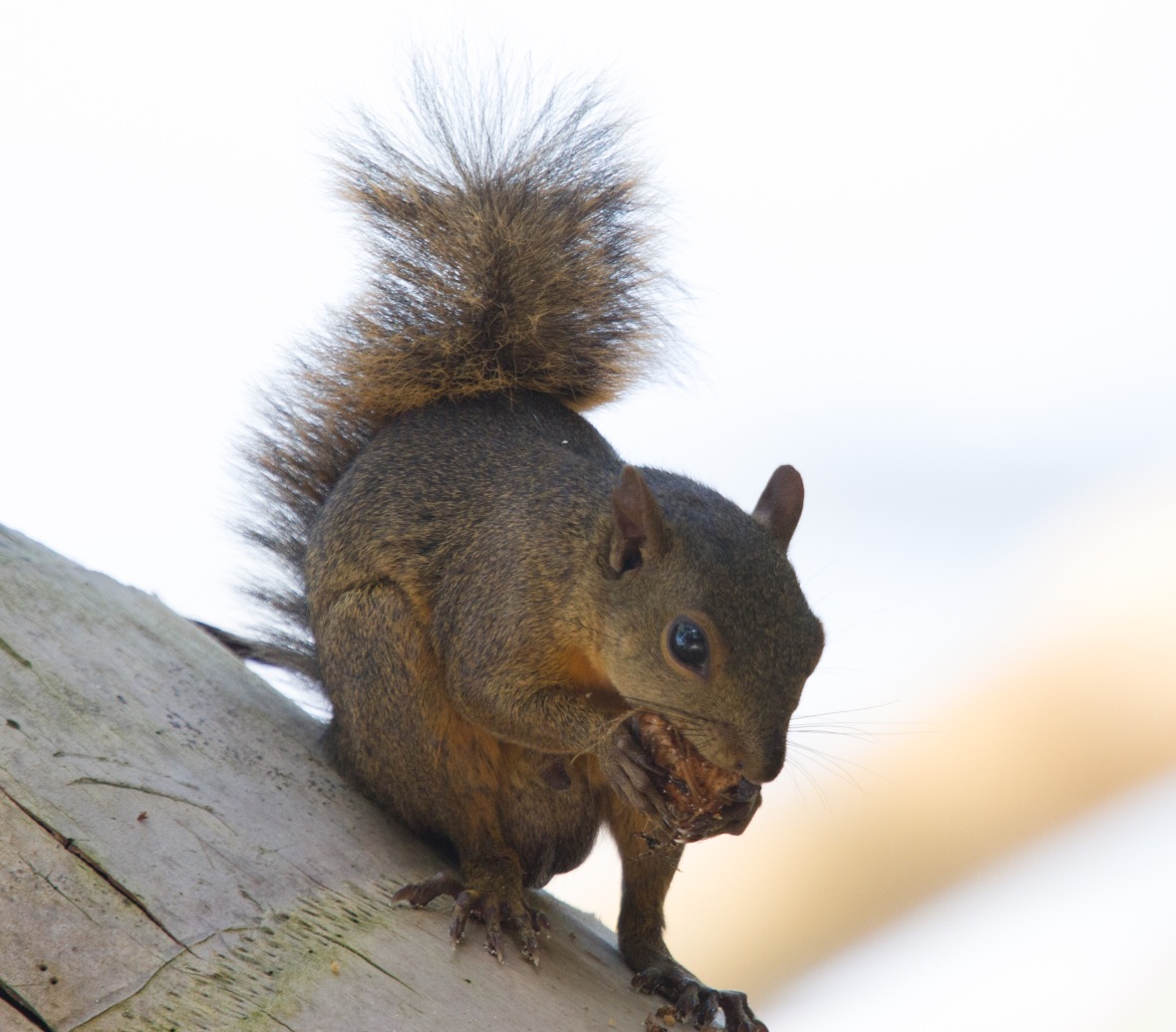 A rather interesting snake was lying along a branch next to the path. We were assured this was non-venoumous by a ranger who was nearby. 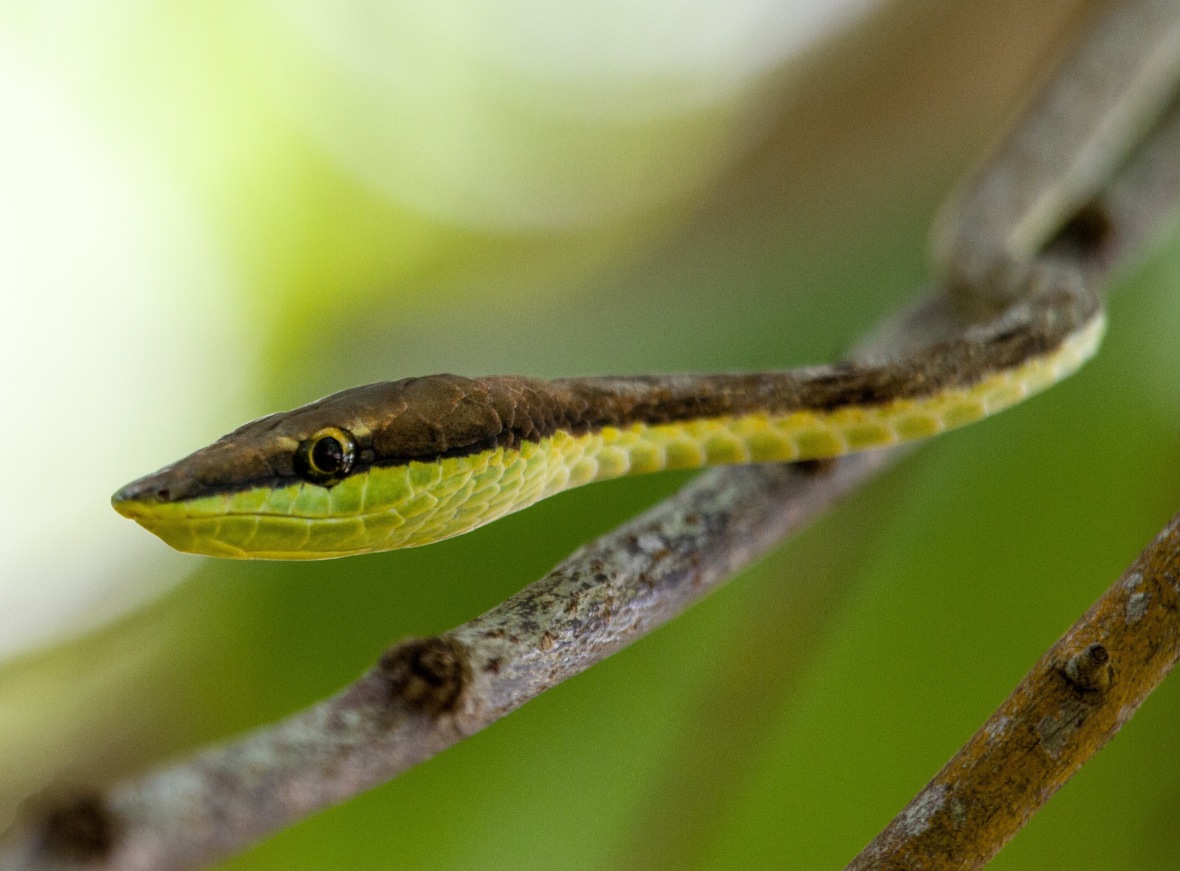 A Three-toed Sloth kept us very amused with his antics. Generally when you see a sloth it doesn’t seem to do much but this one was clambering about rather like a monkey, sometimes relying on incredibly thin branches which looked as if they might give way at any moment. I can never quite get over the fact that sloth faces are so human looking. 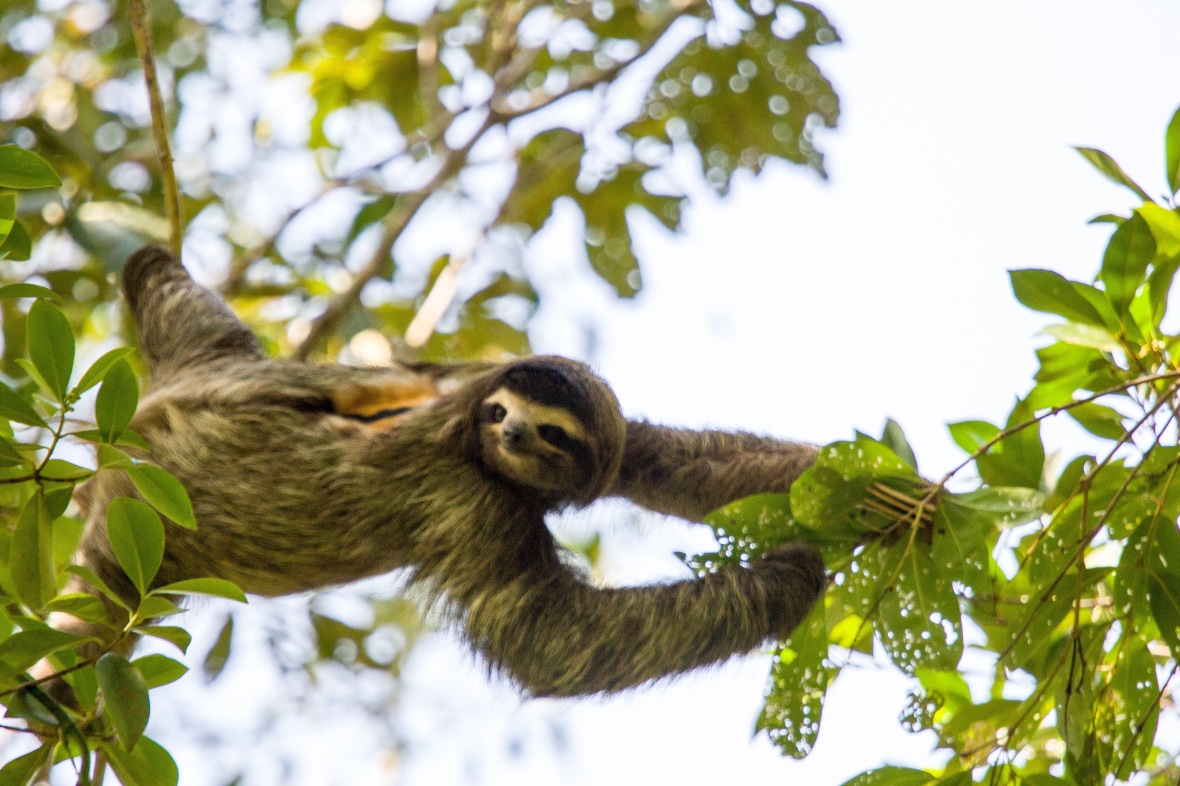 If you’d had enough of wildlife then you could always walk onto the beach for a spot of relaxation and although there are plenty of people using the park you can easily find quiet spots where you can swim in the sea, read a book or just look at the view.

Further down the coast you can visit Puerto Viejo, which is only half an hour away on the bus. This is another town with an Italian influence with great bread shops and cafes. The surf around here is also excellent for surfing and it’s amusing to see middle aged surfing dudes riding through the town with their surfboards attached to bicycles with home made surfboard racks.

Birding wasn’t out of the question altogether and from our bungalow in Playa Negra we could walk north to Playa Grande and find Black Hawk, parrots, toucan, etc.

At Playa Grande, where a river comes in, there are shorebirds but most surprising was to see a herd of cattle being being driven through the surf by some gauchos. It was a novel sight. 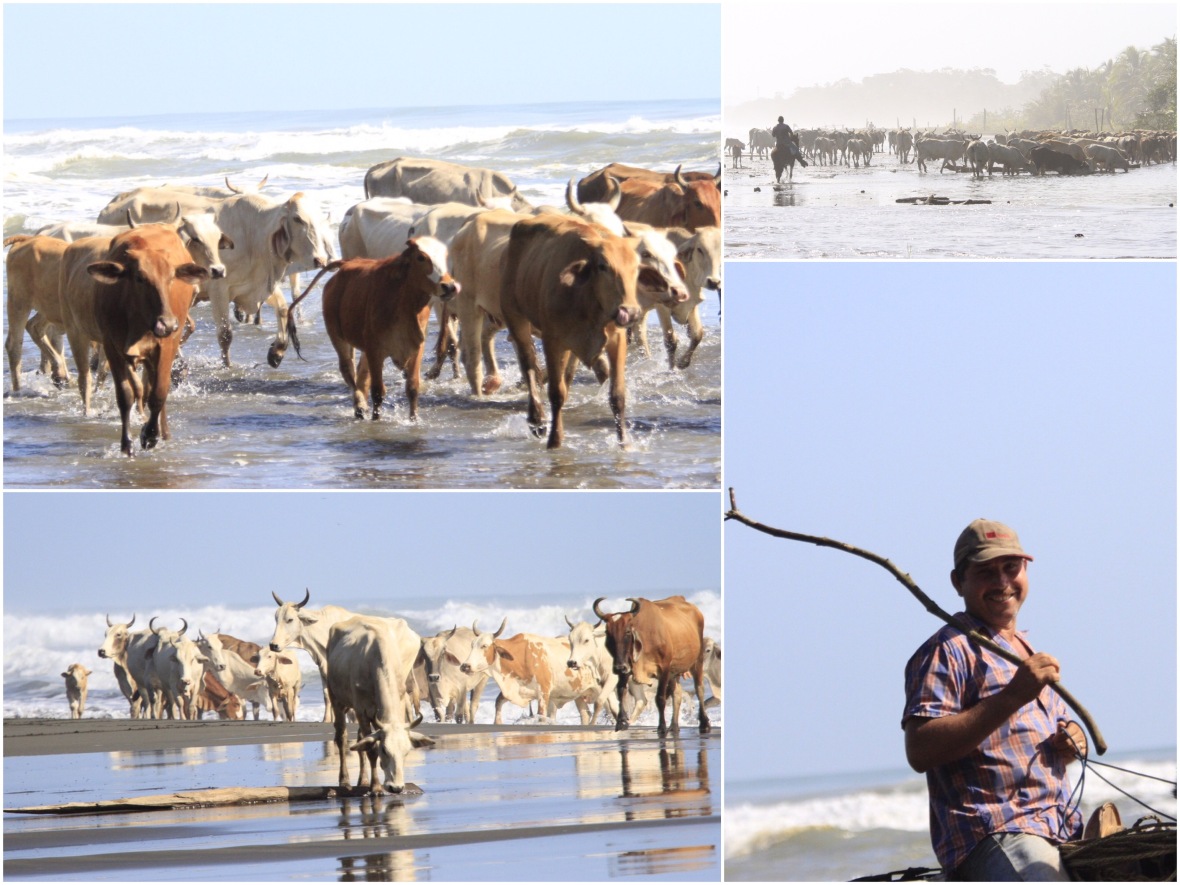 On our final day we arranged with Patricia’s son, Timothy to do a birding walk in the hills behind Cahuita. Timothy normally works in the national park but assured us that he had taken ‘professional’ birders there and knew where to find the birds. He turned up with a ‘scope but, worryingly, no binoculars. But we took a taxi up into the hills and then began walking, following a ‘public road’ which would require at best a 4WD jeep but would probably be better on a quadbike.

Timothy had great eyesight but, in reality, little knowledge of birds, apart from the ones you would see in the park down on the coast. This upset us at the beginning because we were paying a resonable amount for this trip. However, with Timothy spotting birds and us identifying them, we managed to make a reasonable fist of it. We ended up teaching our guide how to identify the birds and he said he should be paying us!

It transpired that Timothy had bought a plot of land up on the ridge where he intends building a house. It was a tough slog up to the top but the views were well worth the effort and if he ever gets to build his house it will have fabulous views down to the coast at Cahuita one way and to the mounains down to Panama on the other. It will also be spectacularly remote! 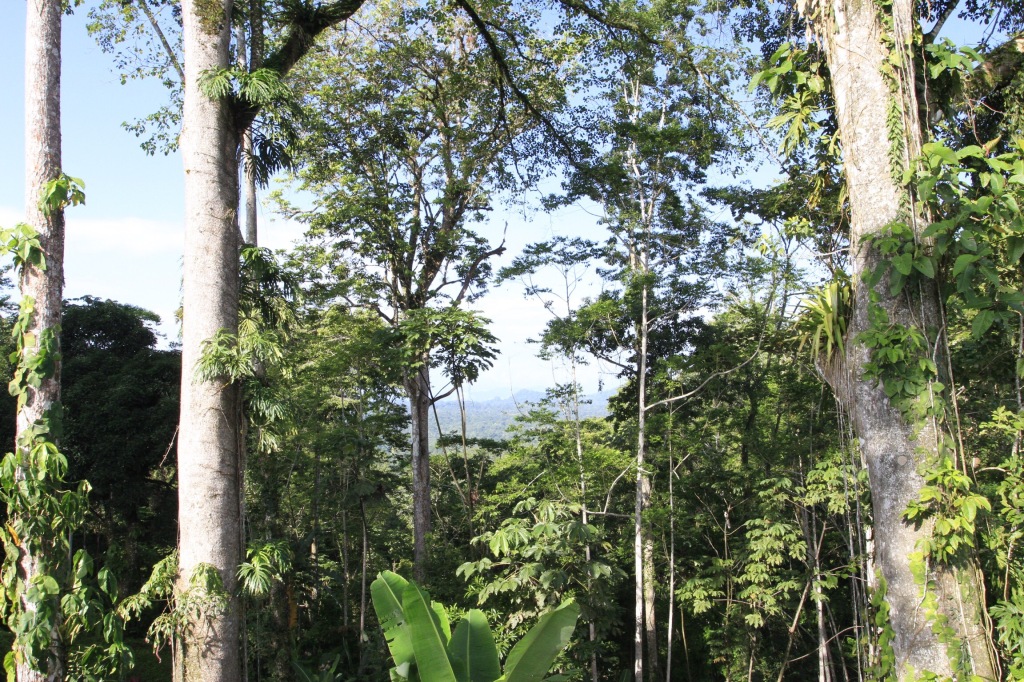 At this point we could have returned by the steep road we’d tramped up but Timothy said that he knew of a track that would take us along the ridgeline and then down to the coast and that this would be quicker. Well, fallen trees, vegetation with lethal thorns, spiders webs, steep drops on paths just a boots width wide and Timothy losing the path several times meant that our shorter route turned out to be at least twice as long as taking the regular path. In the end Timothy admitted that he hadn’t been that way for three years.

We were all exhausted by the time we reached the main road but we had visited terrain that few other tourists would have seen so it was an experience. And the swimming pool afterwards eased our bodies and set us up for travelling to San Jose the following day.