So, we left our apartment in Bolzano and had an hour to kill before getting our train to the next destination. We decided to sit in the sunshine and have a coffee. As we sat there contemplating the world a Ghanaian street merchant came up wanting to sell us a trinket. “Look, for you,” he said, ” a good luck charm.” It was a rather crudely carved key ring. We shook our heads and politely declined and the the man wandered off muttering to himself.

We hefted our backpacks onto our shoulders and staggerd off to the train station with plenty of time before our 11.01 train. Except that when we got there we discovered the train had been cancelled and it was another hour before the next one. Not only that, but a strike had been called between 2-6pm and if we didn’t make our connection in Forteza we would be stuck there for half the day. We were beginning to regret not spending a few euros on the good luck charm, however useless it was as a key ring.

However, we did meet a nice American who was on a beer tasting trip of Europe and a very lovely Italian lady to whom we chatted as we whiled away the time. We made our connection and reached Dobbiaco by mid afternoon. It was a bit of a hike from the station to the apartment we had rented but it turned out to be very modern, comfortable and with lovely views from the balcony. 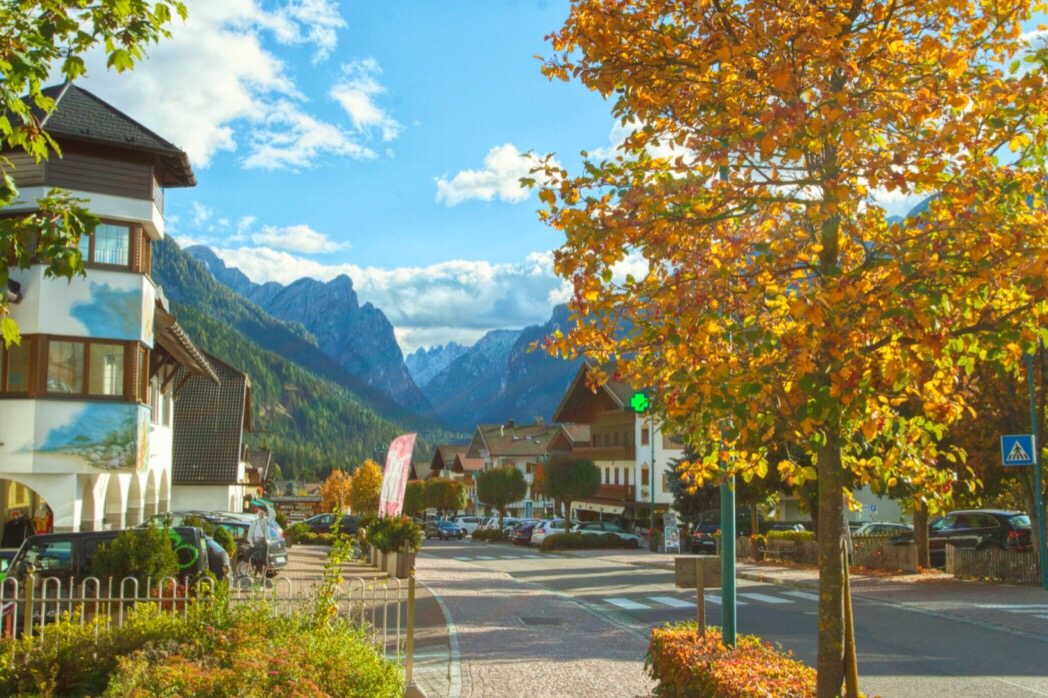 We have a bus station next to us, which is very convenient for getting into the mountains, a Spar shop over the road for our supplies and we have discovered that there are two butchers in town – one named Hell and the other Knocker. We have been to Hell (and back) and bought a very tasty pork chop ; we haven’t tried Knockers yet but I’m sure they’ll have some nice, juicy breasts in there.

We had intended taking it easy the following day. Just getting to know the village, searching out places to eat, checking bus times, etc. But it was such sparkling weather that we just felt impelled to board the 444 bus and get ourselves to the one place that every tourist hereabouts goes to – Tres Cime (Drie Zinnen) – Three Peaks, one of the best known mountain groups in the Alps.

This is a must do walk, it was a beautiful Saturday morning so it wasn’t at all surprising that the  path was already crowded with people. 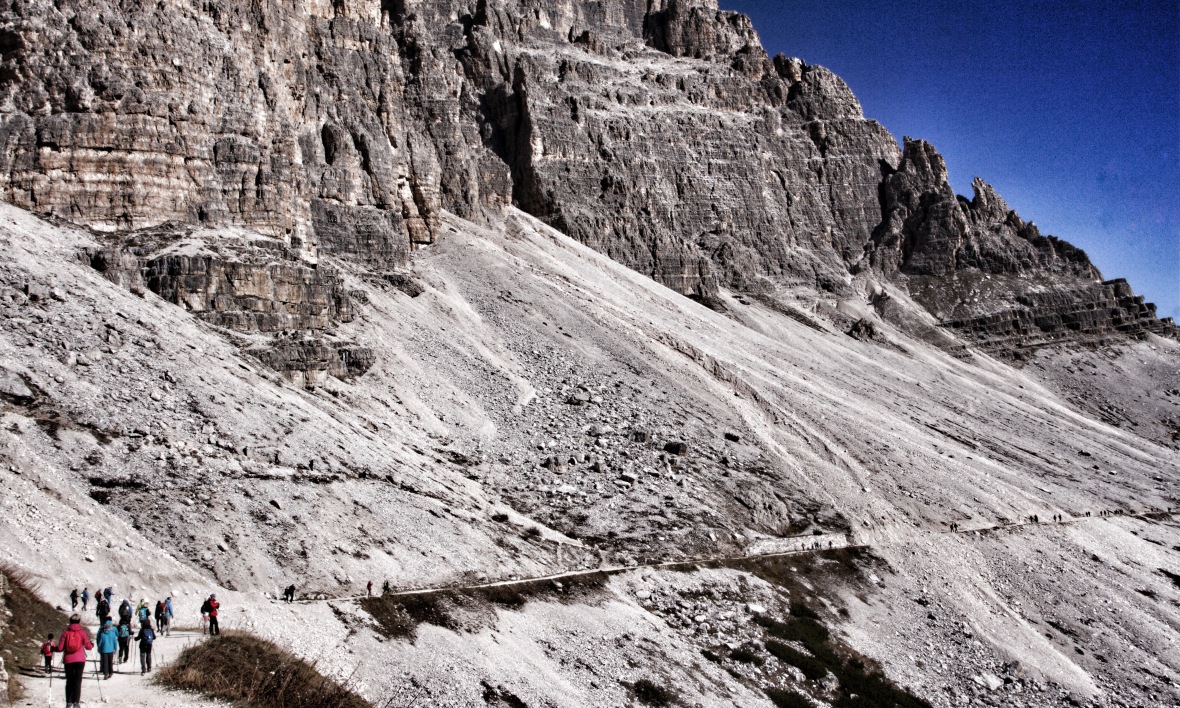 Despite the crowds it was wonderful being so high up in the mountains, with the sun shining down and glorious views all around. The walking was relatively straight forward, although it is a fair distance around the three peaks and the air is noticably thin up there so the going was at times quite tough. There are four ‘refuges’ on the circuit but at this time of year only one is open and that is at the start of the walk so even though the Rif. Locatelli hut and others look inviting you’re on your own as far as food and water are concerned. And a distinct lack of suitable trees and bushes for a ‘comfort’ break, come to that. 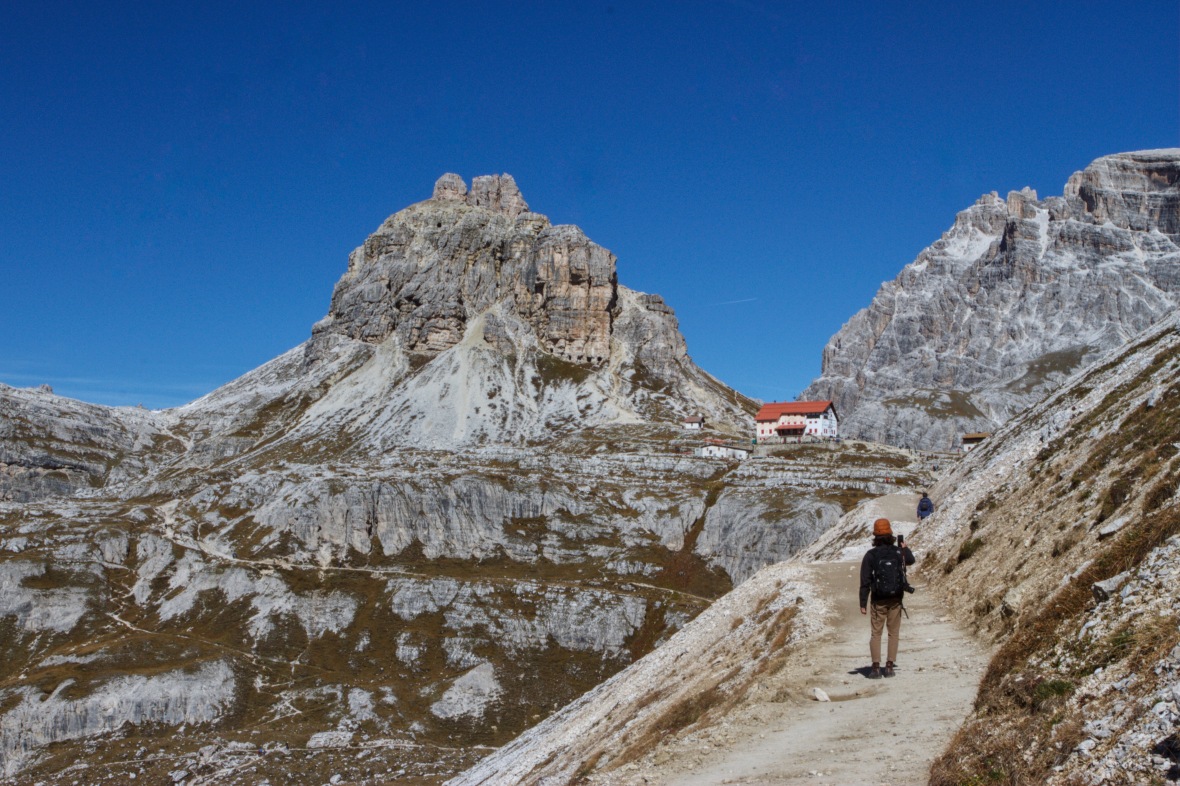 For our first foray into the delights of the High Dolomites, Tres Cime was a great introduction. It is cold at these altitudes even in the sunshine but we returned to our warm apartment in high spirits, at peace with ourselves and with a feeling of having achieved something.

The following day, being a Sunday, we decided to stay local and hike up the Silvestro Valley to the Cappela di San Silvestro but it was one of those overcast, slightly gloomy days. The first we have had in our trip so far and about an hour and a half in we didn’t seem to be getting far, the views were not wonderful and the dark grey clouds didn’t help. So we cut our losses, returned to the apartment for lunch and took a bus into the next village, San Candido. Dobbiaco is a wonderful little place off the main highway but it doesn’t have a lot in the way of shops, bars and restaurants, or at least, not many that are open at this time of year. Candido, on the other hand, has a lot more going on, though even here, it being a Sunday, most of the shops and many bars and restaurants were shut. Even supermarkets shut down on a Sunday in these parts and it’s like going back thirty years in Britain when only the corner shop was open on the day of rest.

We thought it would be a good idea to have a meal in Candido before returning home so we managed to dawdle away our time until the restaurants opened at 6pm. By then the sun had gone down over the yardarm so we could go and have a glass of some very nice, german style beer from the pump and a good hearty meal. And very nice it was too.

One thought on “Dawdling in Dobbiaco ”