We left the mountains in bright, clear weather but by the time our train pulled into Venezia Santa Lucia station it was so hazy that we could hardly make out where we were. Except that there were boats everywhere and a sharp, salty tang in the air. Plus what seemed like thousands of tourists all queuing at the ticket office for the Vapareto – the public boat service which plies the waterways of Venice.

We joined a very long, slow moving line until I spotted a ticket machine with only a few people at it. Now, you would think, wouldn’t you, that in a city catering for a vast influx of foreign visitors every year, the ticket machine might actually have instructions in at least a few foreign languages – English, French, perhaps German, Chinese. But no. That is not the Italian way. This machine was in Italian only and that was it. However, by looking over the shoulders of the locals in front of me I was able to work out what buttons to press and in what order and hit the jackpot when two little tickets popped out of the slot.

We had instructions from our apartment hosts to get on Vapareto Line 2 and disembark at San Samuele. The first challenge was to find Line 2. I’d like at this point to say something about the London Underground map. The London Underground map is a fantastic piece of cartography designed by Harry Beck, an electrical draughtsman who conceived his map to be like an electrical circuit diagram. It is brilliantly clear and easy to follow and has been copied throughout the world. Except in Venice. If the Venice Vapareto map were a circuit diagram it could only succeed in shorting out the whole of the electrical supply of the city in one fell swoop.

We did, eventually, work out which queue of people we should be standing with and squeezed ourselves onto the right boat. Getting on a public boat with backpacks strapped on front and back is not the easiest thing to do but  it’s a great way to experience the hectic activity of the Grand Canal and we managed to get off at the right stop, there to be met by Roberto who took us to the apartment, set in a small courtyard. It was here that Roberto told us his credit card machine was broken and that we needed to pay in cash. I didn’t have quite enough readies on me so Roberto took us on a whistle stop tour of the local area, pointing out good restaurants, snack joints, the pharmacy, supermarket, way to St Marks Square, before we arrived at the cash machine. I felt like a druggie doing a street deal, taking out cash and handing it over to Roberto.

It was surprisingly misty and a little cool as we wandered the streets around the Rialto bridge on our first evening in Venice. But here, all the mad, hectic life that is the city can be seen.  Vaperetos , water taxis, gondola, tourists, and locals hurrying home all seem to converge in the same small space. You just have to stand and stare for a moment and be almost overwhelmed by it all.

The following morning, being a Sunday, we decided to give the main historical areas a miss and go on a wander down back alleyways and small canals. Roberto had assured us that the fish market at Rialto would be open so we got up nice and early and walked along virtually empty streets which were quite sinister in the morning mist, a bit like a film set for a thriller. 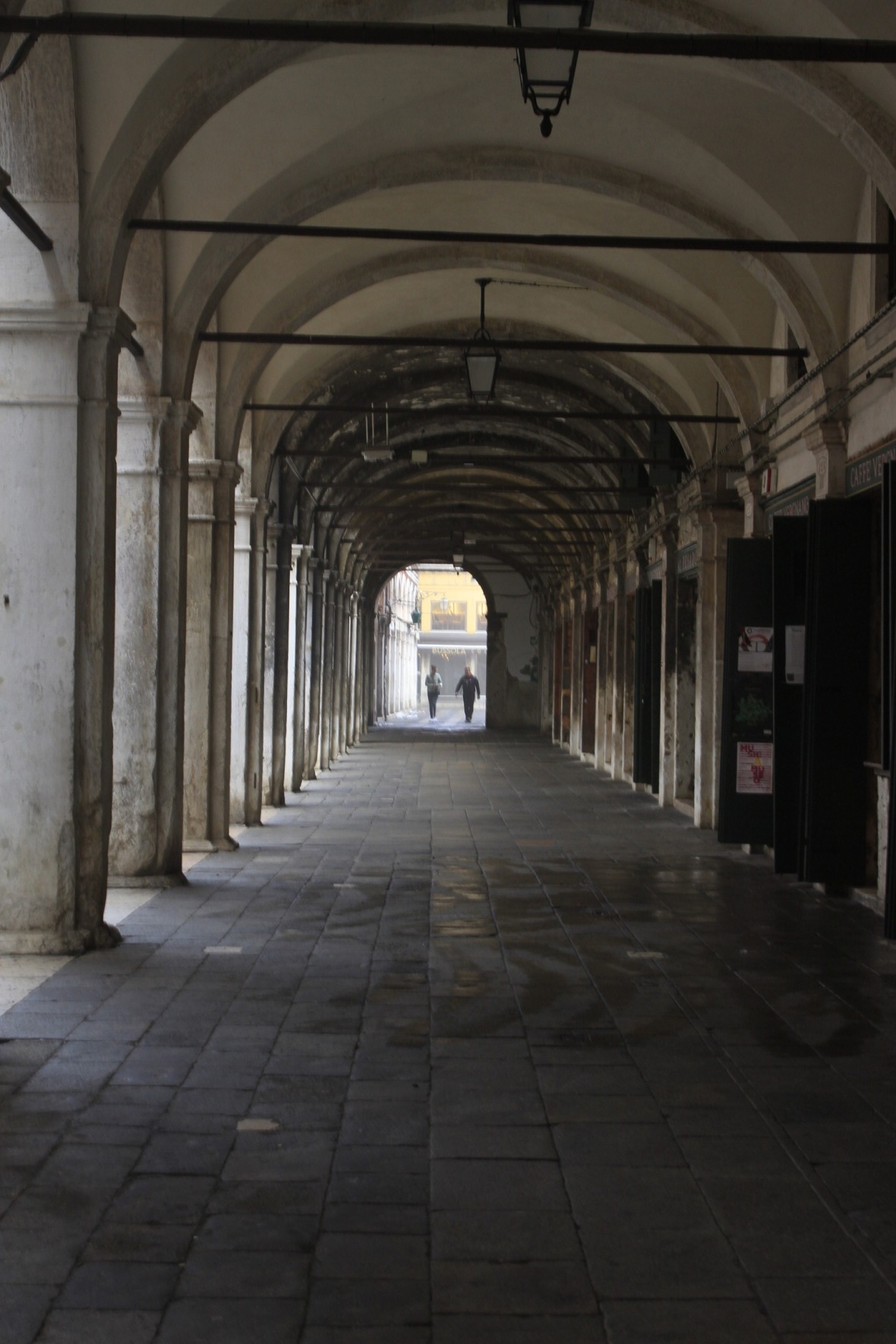 However, of the fish market there was no sign. Either it doesn’t open on a Sunday or it just isn’t there anymore for we never did find it. What we did find, however, was a Traghetto. Take a trip on a gondola in Venice and it will set you back €80. But for €2 each you can get on a gondola and cross from one side of the Grand Canal to the other. Admittedly, the crossing only lasts a minute or two, you don’t have a fancy gondola rowed by a gondolier in a stripy vest but you do get to experience the canal at eye level and you can spend the €78 you’ve saved  on something else. 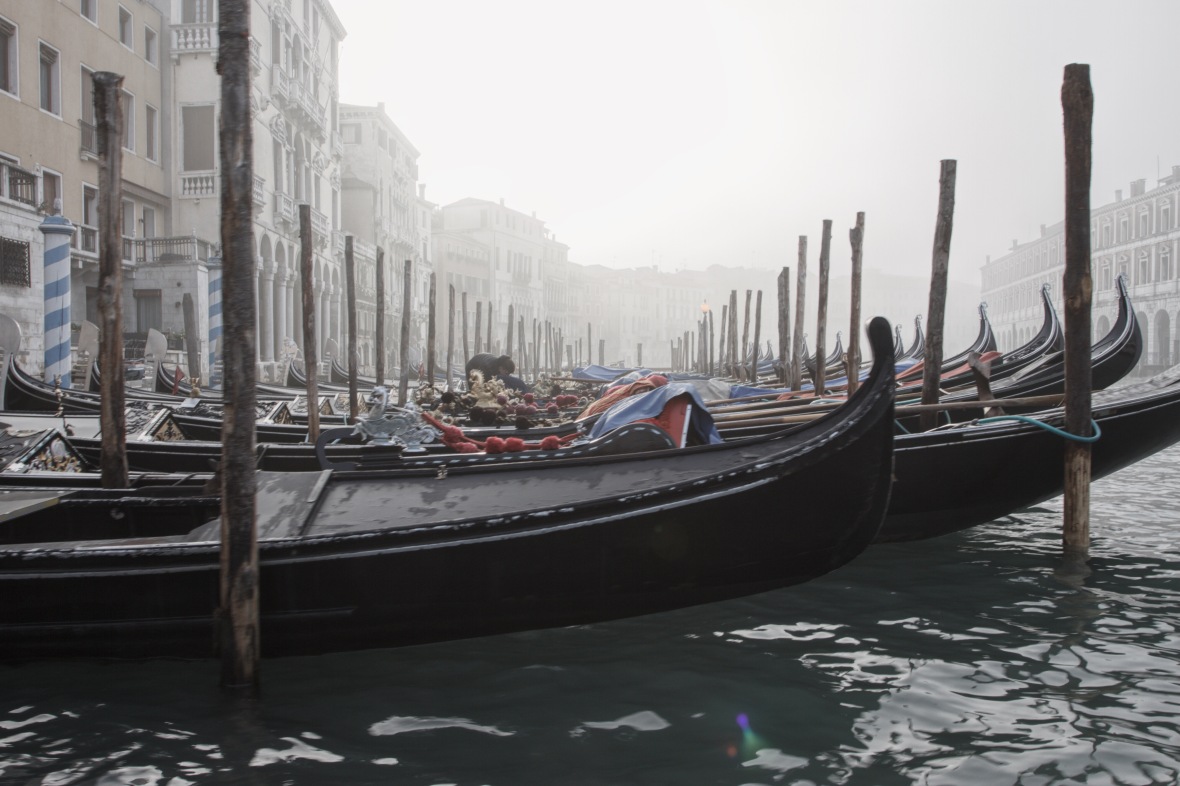 So, having failed with the fish market we wandered the back streets of Cannaregio, finding the Jewish Ghetto area but also finding that a church which had a Titian painting in it was closed until the afternoon. In fact, we came to realise that, on a Sunday in Venice, quite a few things are closed so it was more a case of wandering about, finding our way blocked by a canal with no bridge over it, going down an alleyway into a dead end, backtracking, then turning a corner and finding a boat race going on in which teams of rowers did a time trial in specially adapted racing gondolas.

Guidebooks will tell you that one of the best things you can do in Venice is just get yourself lost. Well, it’s not hard to do, I can assure you and by the time we managed to extricate ourselves from some of the more remote backwater canals and return to our apartment we had managed to get lost more than once and were very hungry, thirsty and ready for lunch. We did have a great time, though, because in Venice, there’s a surprise at virtually every turn.

The following day we were up early again but determined not to get lost this time because it was going to be our grand cultural day – visiting St Marks Square, the Doge’s Palace and the Cathedral. Having our apartment within ten minutes walk of this area was a real bonus as we were able to get into the queue for the palace very early and have plenty of time in there without a huge number of tour groups getting in the way, at least initially. Though, one of the virtues of tour groups is that they tend to pass through very quickly so you only have to be a little patient to then have the place almost to yourself. 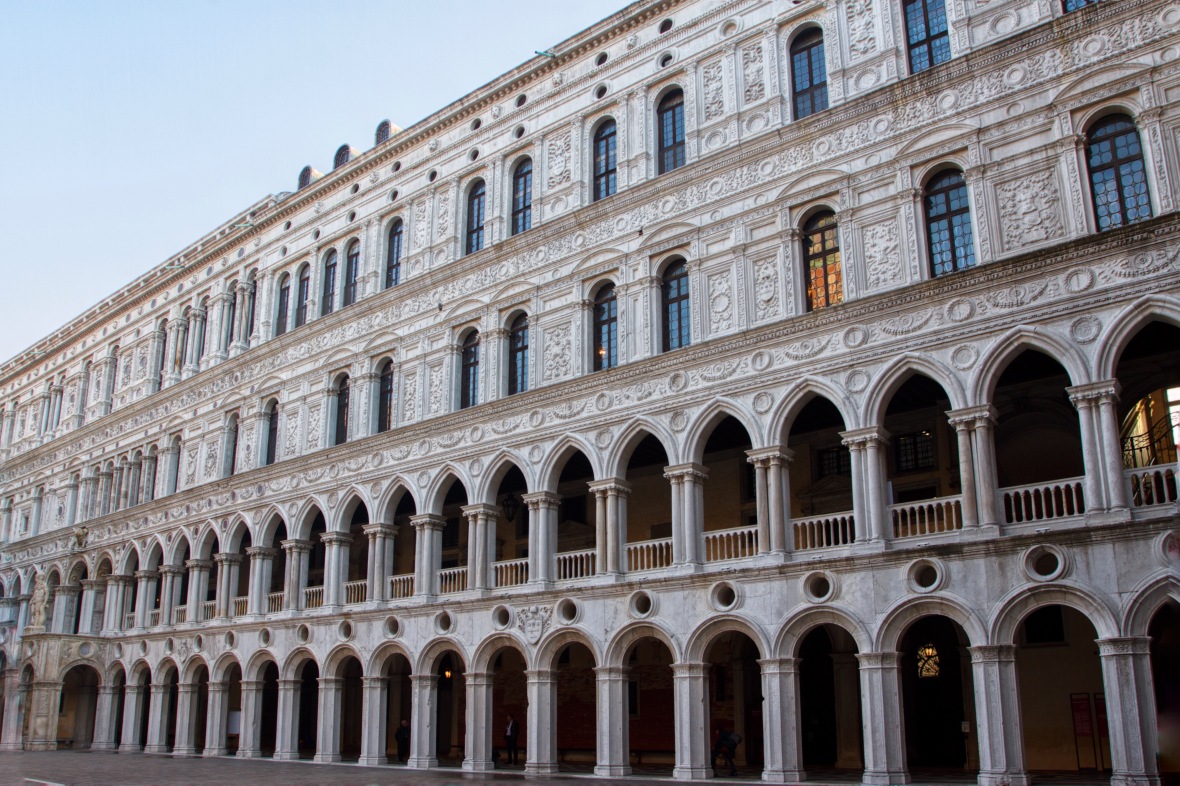 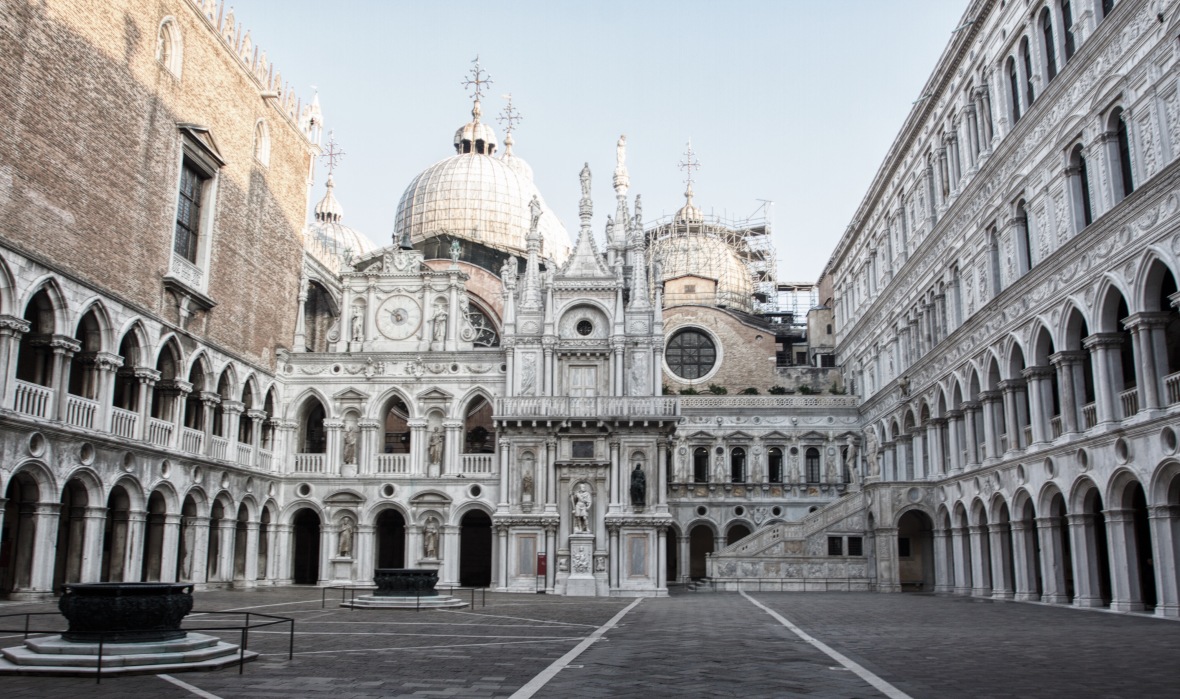 The palace is a phenomenal building representing the power and the might of the Venitian state at the height of its power and glory. It is sumptious both from the outside and in and the incredible painted ceilings and pictures are wonderful. 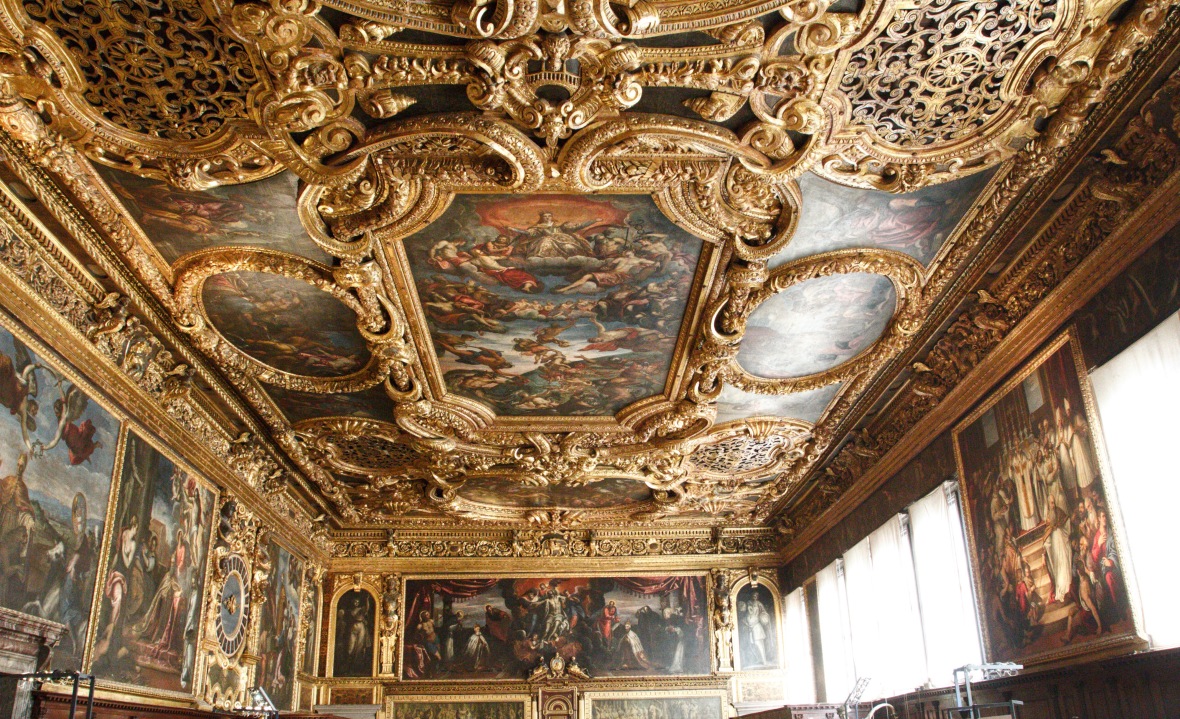 The whole visit took about two hours including of course, a visit to the prisons in the basement and a walk over the famous Bridge of Sighs, from where prisoners got their last view of the world.

Part two of our culture day consisted of a visit to the other ‘must see’ sight in Venice – the Duomo, or Cathedral. It’s certainly a gilded place, with gold leaf everywhere and, once again, some gorgeous frescoes, carvings and ornate designs. Even in this huge space we managed to find a spot where we could just quietly contemplate the majesty of the place and the craftsmanship of the people who built it. 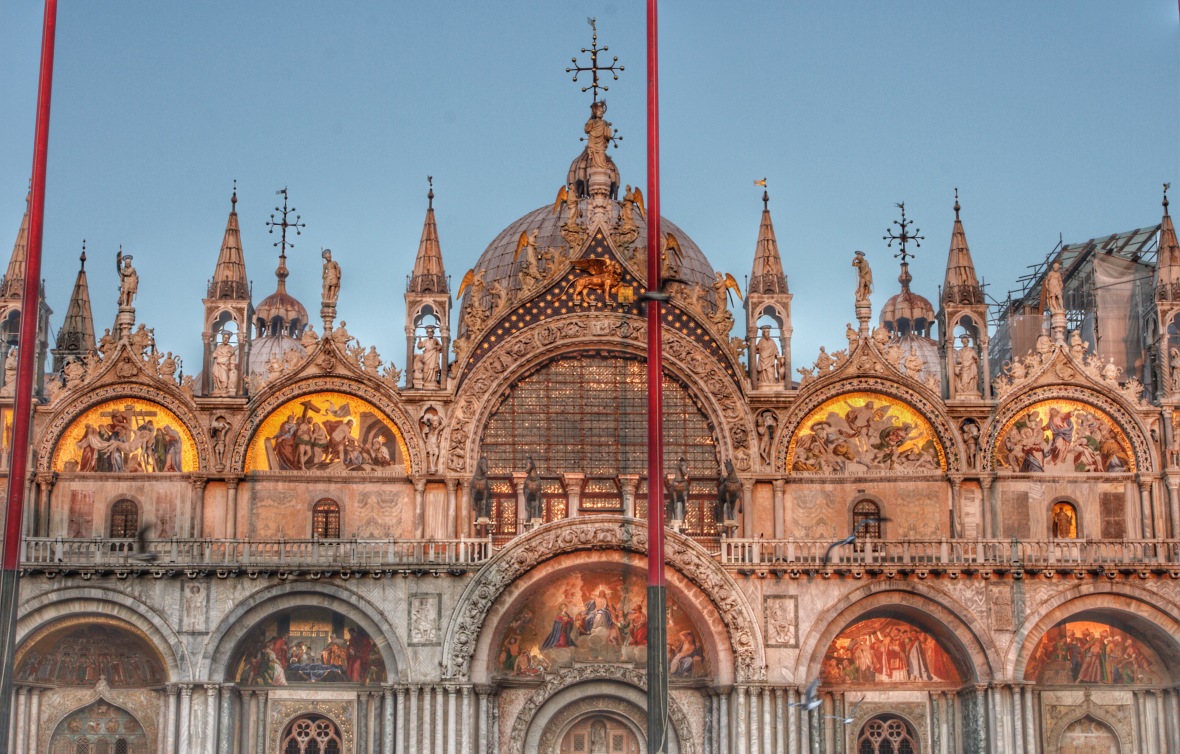 Having had our fill of buildings for a while we decided to go and buy tickets for the Vapareto so that we could get out to the islands within the lagoon on the following day. It was only after we had walked 15 minutes or so away from the ticket office that I realised I no longer had my iPad with me – I must have left it somewhere. I must confess a sense of panic rose in my chest. Travelling with an iPad makes life so much easier but it does contain an awful lot of private information and whilst it is protected by a passcode I wasn’t stupid enough to believe it couldn’t be broken into by someone with enough knowledge.

We raced back to the ticket office as this was the only place we could think that it might be. At first I feared the worse but then, with a look of relief when he finally understood what we were asking, the cashier handed over my precious, purple cased, e-document container, photo storage and editing machine and general lifeline. Lost and found in Venice. By now we were pretty knackered, just like this gondolier: 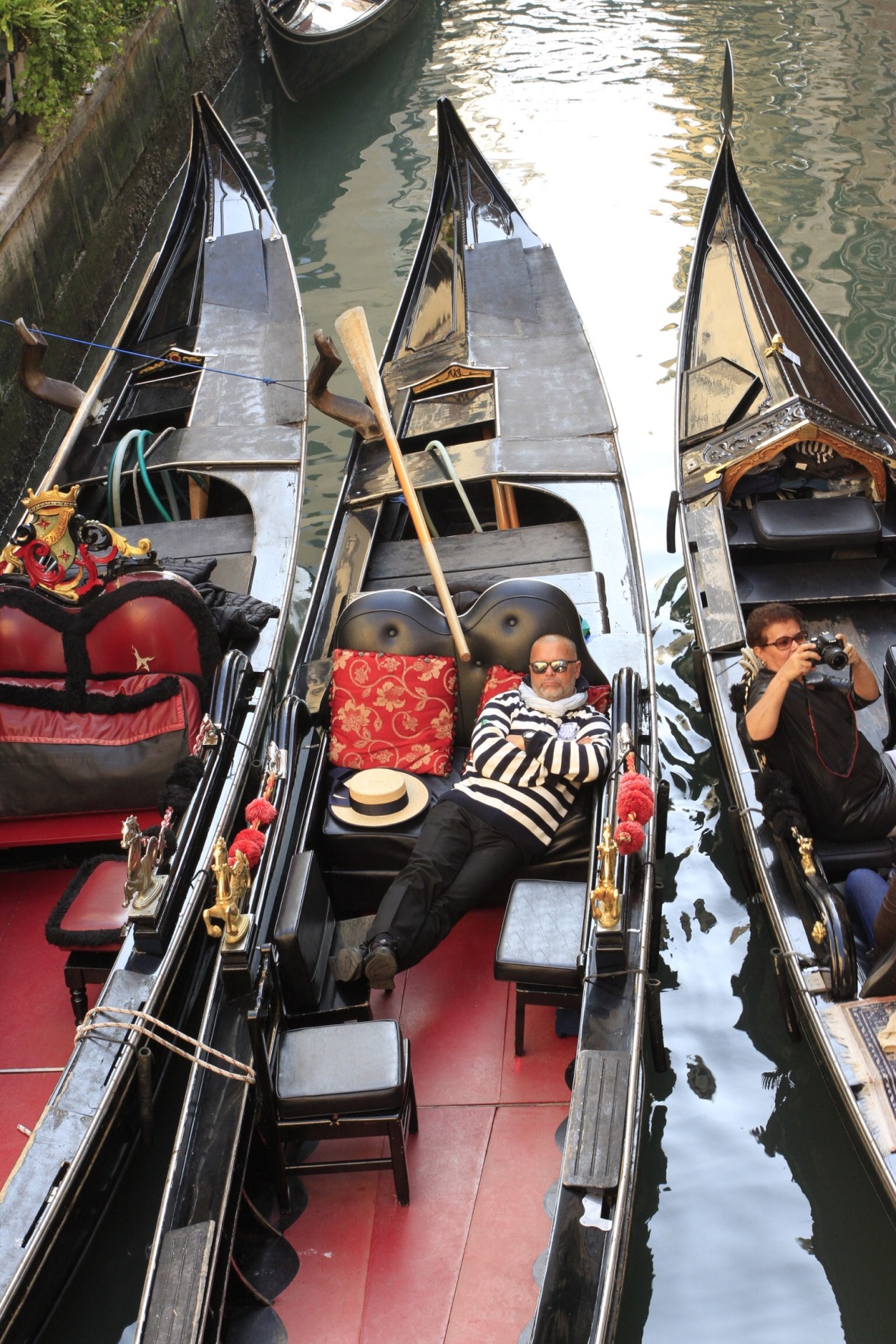 The following morning we were again up bright and early to catch the ferry out to Murano, Burano and Torcello. We had intended starting with Torcello first as it’s the furthest away and is noted for its birdlife. However, due to the usual misunderstanding of the Italian version of timetables we got to Burano first, a small island noted for its colourful houses and streets. Unfortunately, the mist this morning was rather dense so we scrapped plans to visit Torcello and headed to Murano instead. This island, is very very close to Venice and is famed as the centre for the production of Murano glass. We visited the very interesting museum dedicated to this beautiful product. It’s produced on this island alone, mainly because the glass makers were forced to build their factories here rather than in Venice because of the hazard a process which relies entirely on fire poses. Throughout the centuries Murano glass has been a highly valued and collectable product and the museum is laid out extremely well to give you an insight into its production, going back as far as the 8th Century.

It was a shame that the weather put a blight on our plans to visit Venice’s outer islands but we have had brilliant weather most of the time on this trip so we can’t complain. And by the time we got back to the city the sun had come out. We had a rest and a change before taking an early evening Vapareto ride down the Grand Canal as the sun was setting. And quite by chance we found a restaurant which served a brilliant fish soup. It was a fitting end to our four days in Venice.

Venice is at times frustrating, certainly often too crowded, yet full of vibrant life and fascinating sights. Getting lost is both a problem and a solution because you’re certain to come across something interesting and different. The local people are really helpful and friendly and it’s an entirely unique place by day and by night. 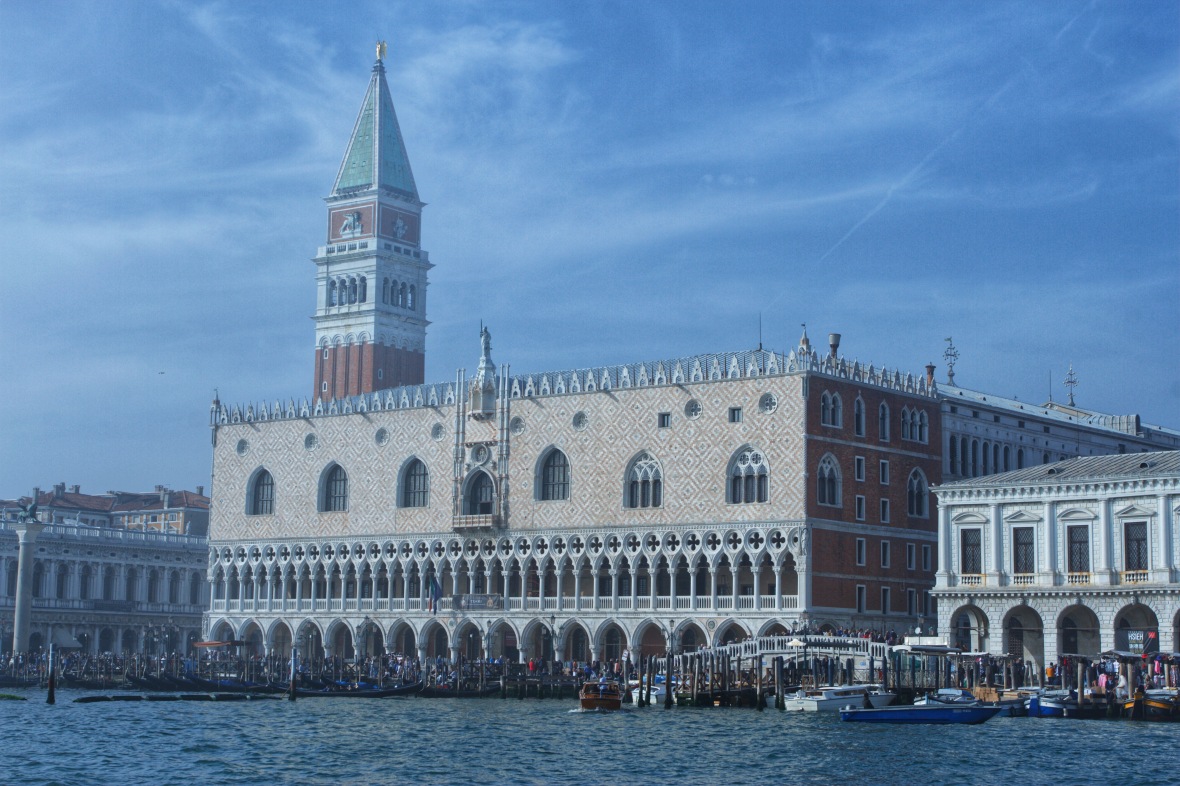 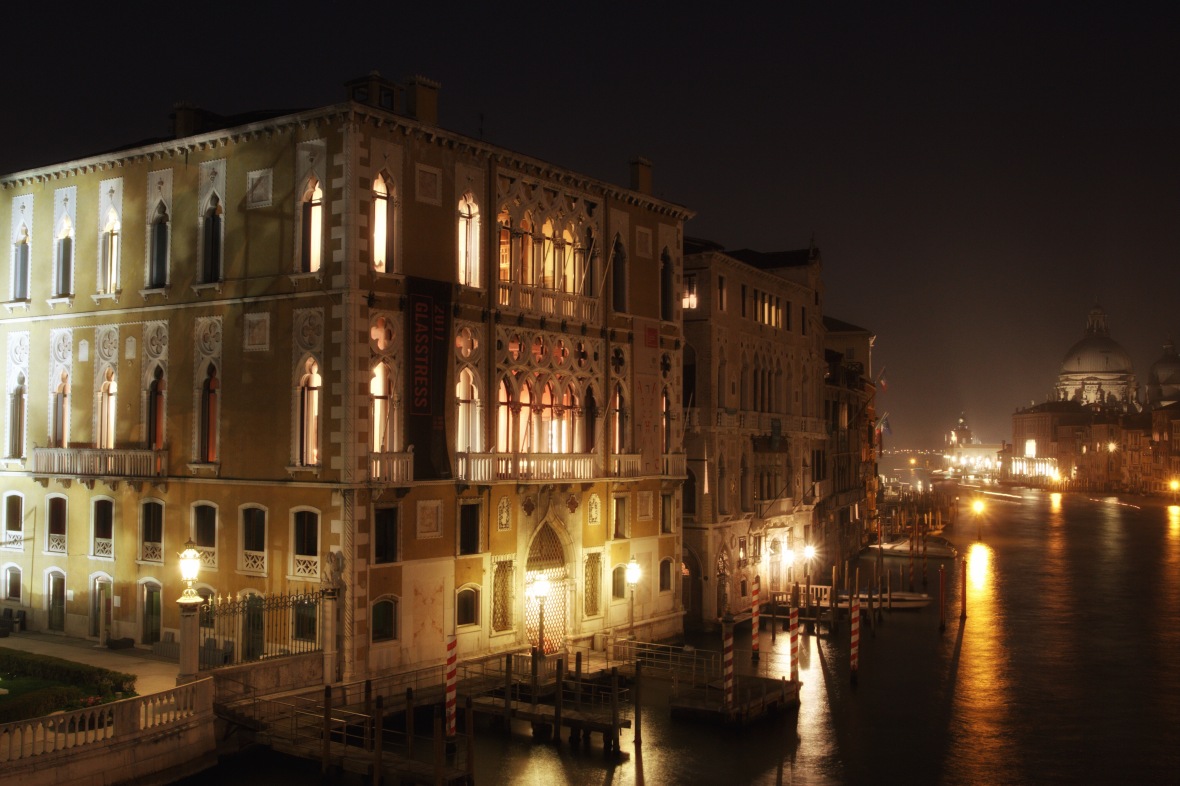