We left our apartment in Santiago well before the rush hour started so it was an easy journey to the airport. The flight to Calama, in the North of Chile, departed on time and we again had good views of the Andes as we flew above them. Our very helpful and reliable Chilean travel agent, Andrea, had organised a basic car for us and the pick up procedure with Econorent was quick and efficient, though we did wonder why one of the documents made reference to a high clearance vehicle. The man at the desk did say, “It’s a diesel, is that OK?” “Yes. That’s all right.” I said.

The reason for all of this became clear when we went into the carpark and found ourselves confronted by a bright red truck – a Toyota Hilux, no less, and virtually brand new. So, not the Hyundai i20 (or similar) which we’d ordered, then. Climbing into this beast was the first challenge – Jane took three attempts – the second being how to turn off the radio which kept blasting out Spanish pop music at full throttle. I pressed every button I could find but resorted to simply turning the volume control right down in the end.

Now, I’m used to driving my sedate Toyota Yaris Hybrid which is not only an automatic but also drives in a manner akin to a slightly fast milk float. Not so the Hilux, which is strictly a butch type of car built for men who can wield picks, shovels and hammers and perhaps even the odd hunting rifle. I gingerly eased out of the parking space, hoping not to slam into anything – I could neither see the end of the bonnet nor the tailgate. It was a bit of a baptism of fire as I headed out onto the open road but luckily there isn’t too much traffic in these parts and the speed limit is generally 100 kmph so you’ve got a little time to sort out which of the six gears you should be using.

At our first stop we sort of fell out of the cab to the amusement of other tourists in their prissy little SUVs. We have christened our red beast ‘No Name’ since it will be taking us through the driest non-polar desert in the world (from a song by America : ‘I’ve been through the Desert on a horse with no name, it felt good to be out of the rain’). 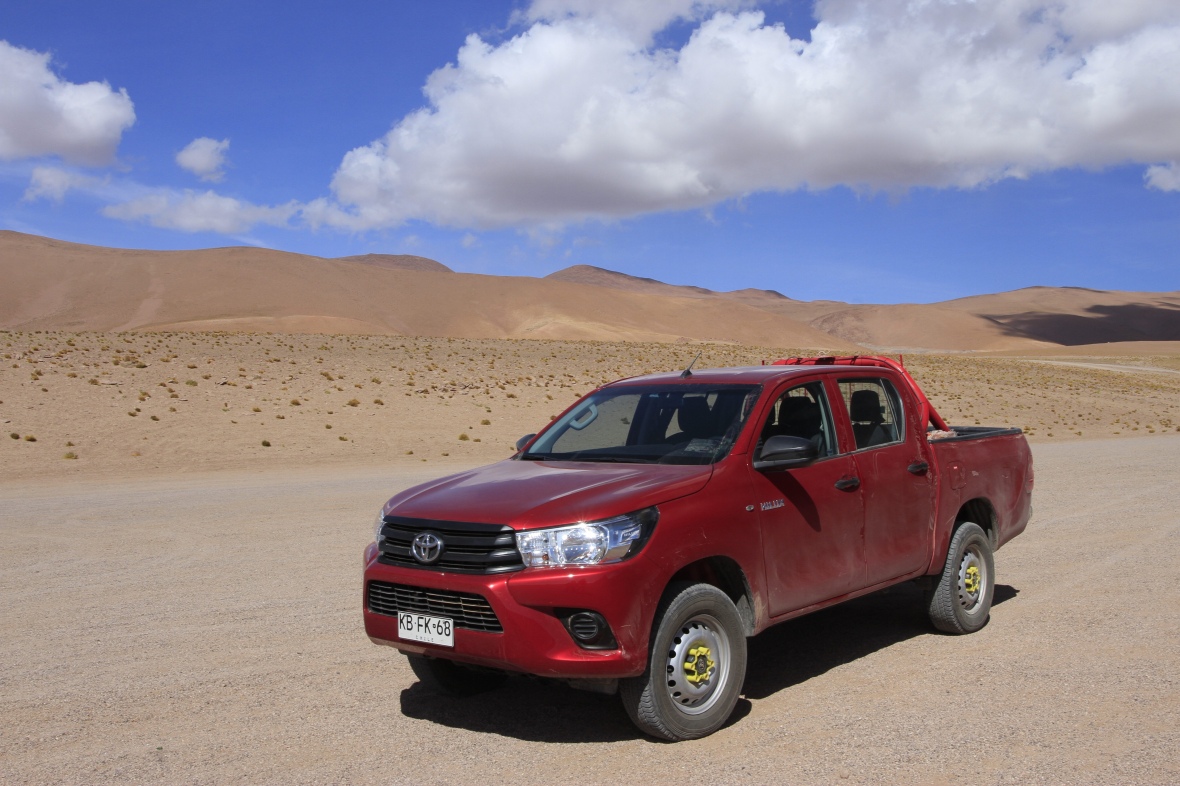 We rode into the only tourist hub for the Atacama, San Pedro de Atacama, a dusty little town full of restaurants, hostels, hotels and tour company offices. The narrow streets are difficult to negotiate in a truck when you are not yet used to its dimensions and almost the first time I tried driving through town I ended up going the wrong way down a one way street! Reversing out of that one was a challenge.

We had booked accommodation on the outskirts as town is really quite busy and out there it was more relaxing. We soon got talking to other guests, one of whom, Valeria, helped plan our whole itinerary. Val is a Chilean but lives in Australia and works as a travel agent. She planned the itinerary so that we would start at a lower level so that we could acclimatise before tackling journeys which would takes us to 4,500+ mtrs. Even in San Pedro one could feel the effects of being at 2500mtrs (8000 odd ft.).

I must say that all the Chileans we’ve met have been extremely friendly and helpful. Their Spanish can be a little difficult to follow at times as they tend to chop off the ends of words and talk very fast into the bargain. But we’ve had a tremendous amount of help already and have become very fond of Chile.

San Pedro lies at the head of the vast Salar de Atacama. It rains very infrequently here which is why it is classified as a desert but there is by no means a lack of water and the Salar is dotted with highly saline lagoons. Our first outing took us to Laguna Cejar which is principally interesting for the fact that it’s one of the few lagoons you can swim in. I say ‘swim’ but in truth it’s a bit like the Dead Sea in which people just float effortlessly on the surface. We eschewed the swimming, which is just as well as we didn’t pack our cossies.

The next, and more interesting lagoon was Tebenquiche. Here the salt sits on the surface of the water and looks for all the world like ice. 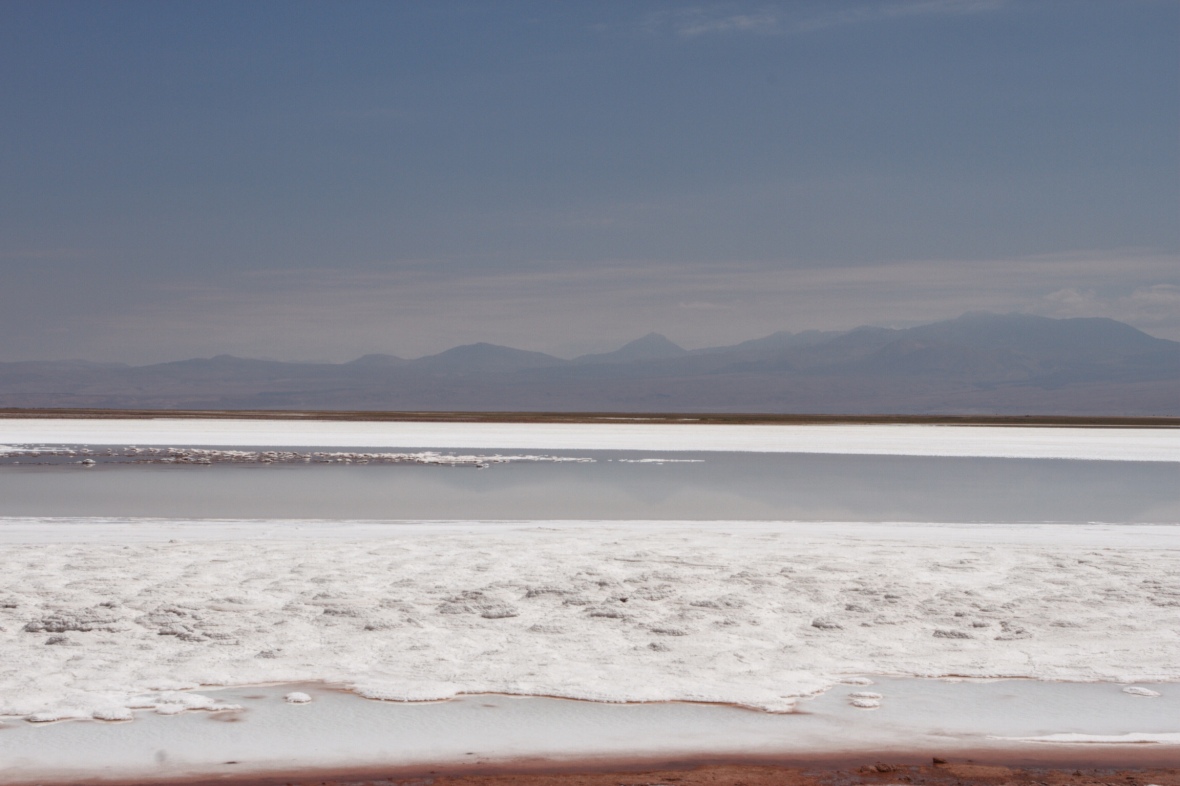 So how come there’s so much water in this desert? Well, it does occasionally rain here but the Salar is surrounded by mountains and volcanoes and for much of the year they are snow covered (though not in what is now high Summer in Chile) and the snow melt drains into the plain and either flows directly into the lagoons or comes from underground springs. The result is a vast, arid region punctuated by many large bodies of water.

It was at Tebenquiche that our truck came in handy for the first time. We were approached by a couple of Chileans working in San Pedro who had cycled the 30+ klms out here on their morning off and who didn’t fancy cycling back in the searing heat. So they asked for a lift. We redistributed our baggage, hoisted their bikes into the flatbed and drove two very grateful restaurant staff back into town. We’ve always believed that giving and receiving help is a basic human trait.

To get away from this oddly watery world you just have to visit Valle del Luna – Valley of the Moon – on the outskirts of San Pedro, which at sunset is cram packed with tourists. This amazing landscape is packed with massive rock formations, impressive sand dunes, caverns and dust, akin, apparently, to the Moon. And even here there is salt; on the surface, compressed into veins in the rock and buried deep down in mines. We are already appreciating the uniqueness of Chile. 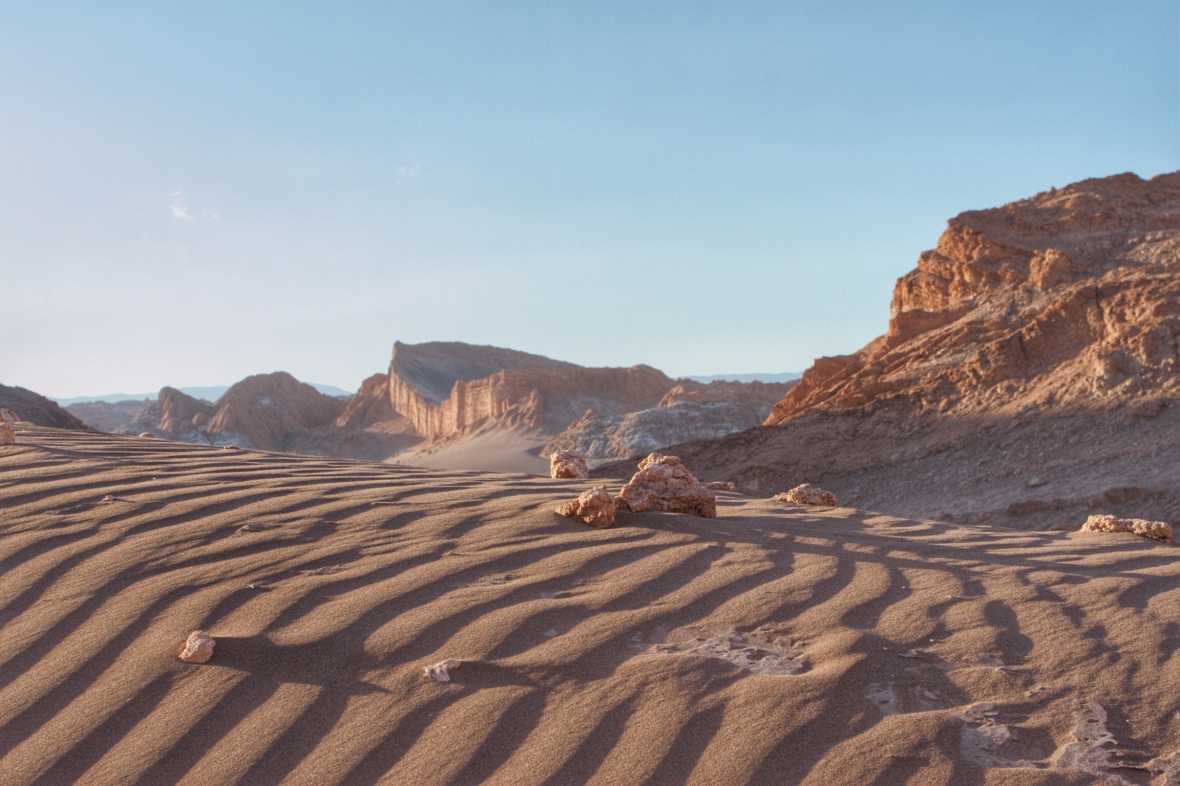 But of all the salt flats we visited on the Salar del Atacama our favourite just has to be Chaxa. A stunning lagoon of mirror perfect reflections with Andean and Chilean Flamingoes set against the backdrop of the Andes. How much more perfect could you get?

2 thoughts on “The Atacama Desert : Salt-lakes and Moonscapes”