We left Valparaiso on a Sunday morning with little traffic about. Now that we knew the lie of the land and had a street level map we had no problems in leaving the city. We were flying south this time to Puerto Montt to explore the island of Chiloe and the Lake District.

We spent the evening in P. Montt, which is a transport hub for South Chile and doesn’t really have much more than that to recommend it. The following day we picked up our hire car from an outfit called Ocarrol which maybe should have warned us. Short of Leprechauns leaping about the place this lot were really away with the faeries and it took three times as long to pick up this car as any other so far. And it is a beat up Renault Symbol, the most basic model you can imagine. The only thing it symbolises is that Renault couldn’t make a decent pram let alone a car.

So, avec le pied sur la gas, we make for the ferry terminal at Pargua Abtao and take the 15 minute ride to Chiloe, an island noted for being like Chile was a few years ago. It has a very definite character about it, its own dialect and is famed for its churches. For the first four days we based ourselves at the top of the island in Ancud, a part much less frequented by the tourist crowd.

Our home was Casita del Mar, home by the sea, and it really was right next to the ocean in a beautiful bay. The casita had sweeping views from its panoramic windows and we could lie in bed at 6.30 in the morning, drinking our coffee, watching seagulls and cormorants fishing, ducks and waders paddling about the shoreline and even dolphins languidly passing by. Sometimes you would see a huge gathering of seabirds circling around a baitball of fish and we spent many a happy hour just staring at the sea in quiet contemplation.

It was an idyllic spot, though somewhat remote. Because we didn’t have a 4×4 we had to leave the car up at the top of the hillside and walk the steep, rutted road whether up or down, anytime we wanted to go somewhere. Needless to say, we stayed in in the evenings but this was no hardship given the glorious nature of our surroundings.

But we did wander away from our little hideyhole to visit interesting parts of the coast. This western side of the island faces the open ocean so the coastline is quite dramatic. There are numerous bays and inlets where the waves crash into the shore and from the hillsides you might see bottle-nose dolphin frolicking about and playing at body surfing.

At Penihuel you can take a boat ride out to some nearby penguin colonies. Penguins breed on many small islets on the whole of the Chilean coast and locals are obviously keen to provide nature tours. Here, the colonies are close inshore so it’s a short boat ride to see them. There are two species at Penihuel, the Megallanic and Humbolt Penguin. At this time of the year the chicks are well grown and taking their first waddling steps down to the water. 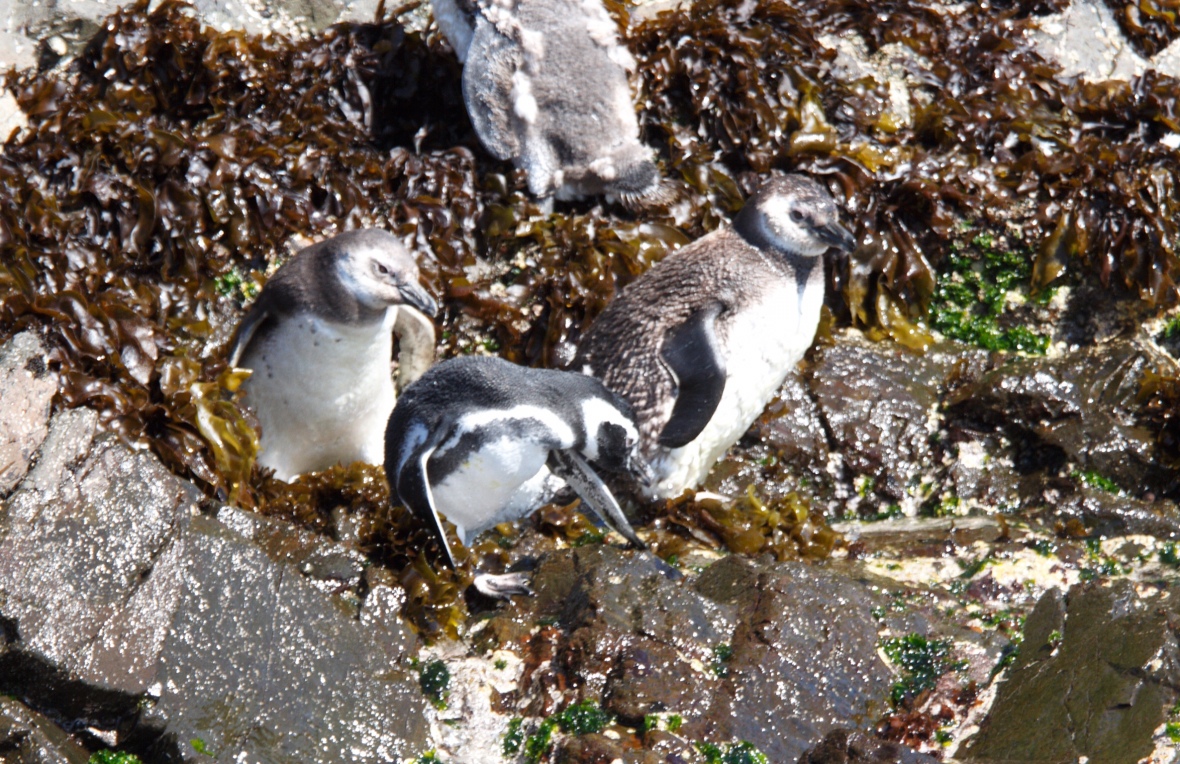 We had read that there was some really good hiking to be done much further down the west coast and so took ourselves off on a long gravelly, pot-holed road, the Renault jumping around like a child’s bouncy castle, until we got to Rio Chepu. We couldn’t find the sendero (footpath) we wanted so just parked up and walked down the road. But before too long we were surrounded by a horde of black flies, as large as a bumblebee in Britain, and with a red tail to boot. They don’t have a sting like the bee but do give you a painful bite. We were swatting them off with our hats and were well covered up but they still managed to get through our clothing. So at this point we gave up and retreated to the car. Apparently, these flies arrive in January, plague people for the whole of the month and then disappear when February arrives.

The East coast of Chiloe is much more pastoral, separated from the mainland by the Golfo de Ancud. There are many small islands within this gulf some of which you can visit by regular ferry crossings. After leaving the idyllic Casita del Mar, we based ourselves near the capital of the island, Castro. Like many large towns in Chile, it tends to be choked with traffic and noise so we opted to stay in a quieter area, up on a hill overlooking part of the gulf. Up here it was relatively peaceful, except for the ubiquitous dog yowling at night, and we had great views from our cabin and helpful advice from Pedro, the owner.

If you want to stay in Castro itself you can choose one of the many ‘palafito’ hotels. Palafitos are houses that have been built out over the tidal estuary using wooden piles driven into the mud. They are usually brightly painted and many have been converted into places to stay. Sadly, some of the houses are rather crumbling now and there are far fewer than in the past but they do make for an interesting sight. 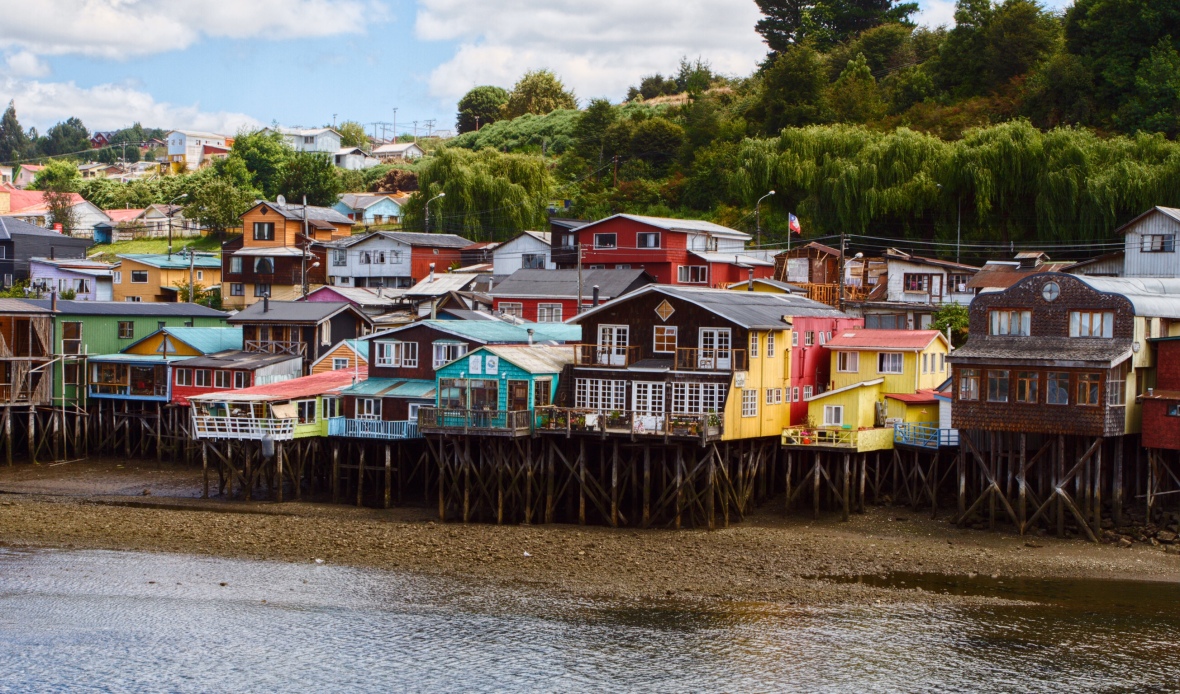 Chiloe is known not only for its palafito but also for its churches. Jesuit priests arrived in the 1700’s and proceeded to build churches in a distinctive style that is common throughout the island. Most of the original buildings have disappeared but they’ve been replaced by newer structures built out of wooden frames and clad either in brightly painted tin sheet or wooden shingles. You can do a whole tour of the Churches of Chiloe going from place to place, not only on the main island but also on the smaller islands dotted about the gulf. Small ferries ply the routes between the larger islands whilst local taxi boats will take you to the smaller islets.

On our final day on Chiloe we were returning from a trip to one of the national parks when we stopped to pick up a hitchhiker, who struggled into the back seat with a rucksack, a small keyboard and a guitar. Miguel had very little English but with our rudimentary Spanish we established that he was a musician travelling the country performing gigs, presumably for cash tips. Before too long he was playing his guitar and singing Chilean folk songs. We had our very own live concert whilst driving the highway. We reciprocated by singing a few songs of our own, including Te Aroha, a Maori song we sing in choir. Miguel seemed to enjoy our two part harmony and it made the journey back to Castro go fast.