Leaving Chiloe we decide to head north into the region of Los Lagos, Chile’s equivalent to the English Lake District with high mountains, fast flowing rivers and a series of beautiful lakes. Only the last time we were in the English Lakes there wasn’t a ruddy great, steaming volcano stuck at the end of Windermere, unlike Lago Villarica which hosts Volcan Villaricca on its shores. 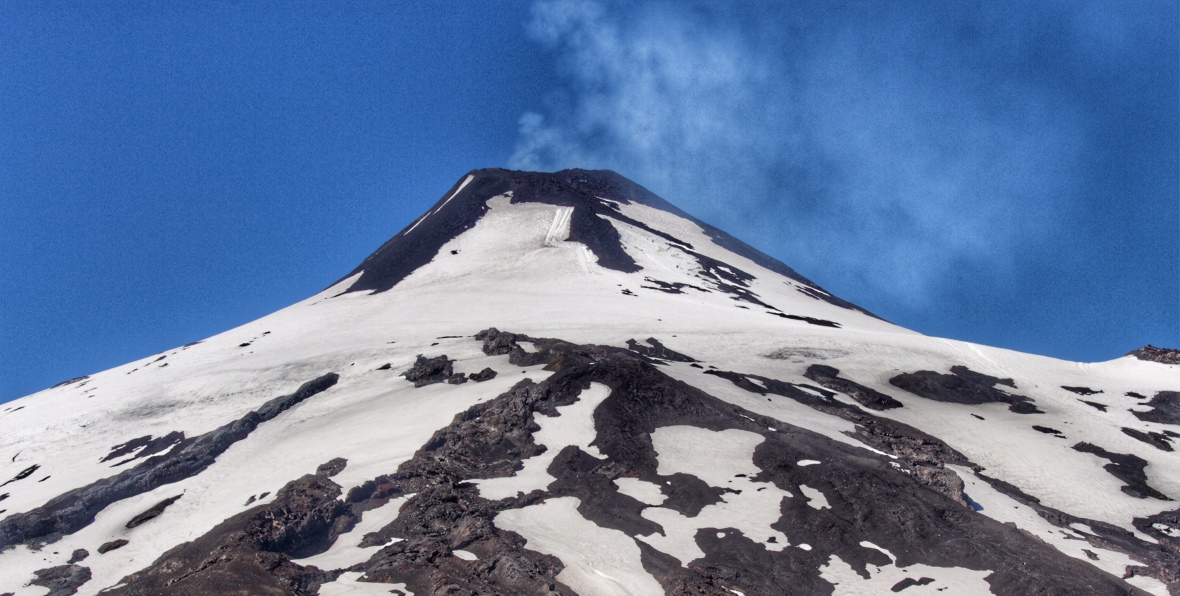 Los Lagos is similar to the Lake District in one other respect; it is ram-packed with people in the summer. February in Chile is the equivalent of August in the UK and you would never choose to go to the Lake District in August, would you? And yet, here we were, trying to find accommodation, on the hoof, right in the middle of the Chilean summer. The limited amount of searching we were able to do on Booking.com, Home and Away, Airbnb and several other sites brought very few hits but we eventually found a rather nice ‘house’ up a rather difficult gravel road perched on the slopes of the volcano above the resort town of Pucon. All around this area you see signs saying ‘via de evacuacion’ with a little drawing of an erupting volcano and two people running away from it. Where we were staying we’d just have to hope that any eruption would blow out the other side of Villarica, not ours. (At the coast, by the way, the volcano is replaced by a Tsunami wave but it’s the same two people running away. You’d have thought that by now old Jose and Maria would have learned to stay well away from volcanoes and waves but it seems they just can’t resist the danger.)

One benefit of being on the slopes of Villarica was that we could get to the hiking area before the crowds arrived and we walked a lovely route up through the tree line and then out onto an old lava field. The views from up here were tremendous and it was well worth the sometimes difficult terrain to get up on the mountainside. 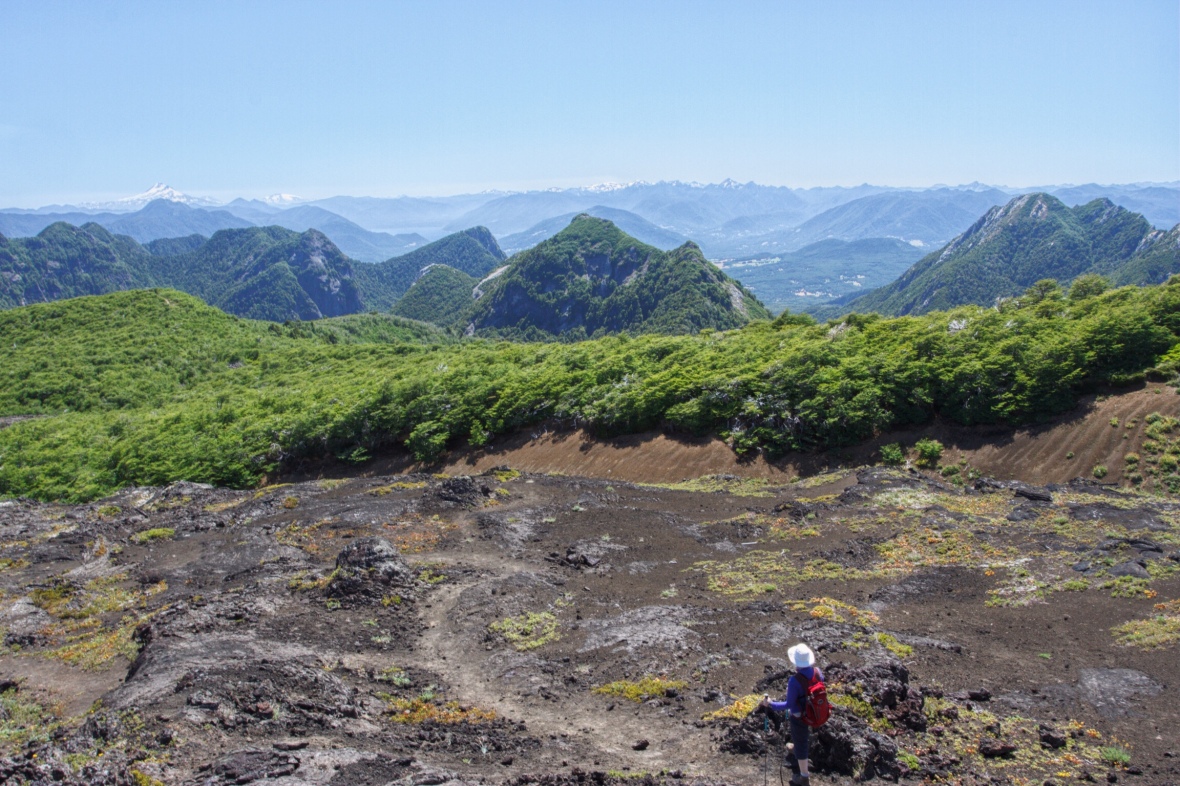 You can take a hike right up to the top of Volcan Villarica but you have to go with a guide, start out at first light and be prepared to wear crampons. Through our binoculars we saw hundreds of people tramping up through the snowline. At nearly 3,000 mtrs high it’s a serious hike, though there is chair lift part of the way (this is also a ski area in the winter), and there have been a number of people falling to their deaths in recent years so it’s not for the faint hearted. But it must be a pretty spectacular climb judging by the number of people we saw on the slopes.

Pucon itself is definitely a holiday town with massive hotels, tacky bars and cafe’s, and shops catering for every taste, cars all over the place and a beach on the lake more crowded than we ever saw in Rio de Janeiro! Ambleside it ‘ain’t!

To try and escape the hordes a little we took a trip to Huerquehue national park. It was quite a journey, the last part of which was up a challenging gravel/dirt road which the Renault just about managed. The big attraction at this park is a trek to a series of small lakes but if we thought that the rough road would mean fewer people we were wrong. We arrived quite early and the car park was already half full.

The trek up to Lagos Chico, Verde and Toro is billed as two hours but the route climbs up a steep mountainside for virtually all of that time. It’s mostly through trees but with the occasional spectacular view of Volcan Villarica in the distance. 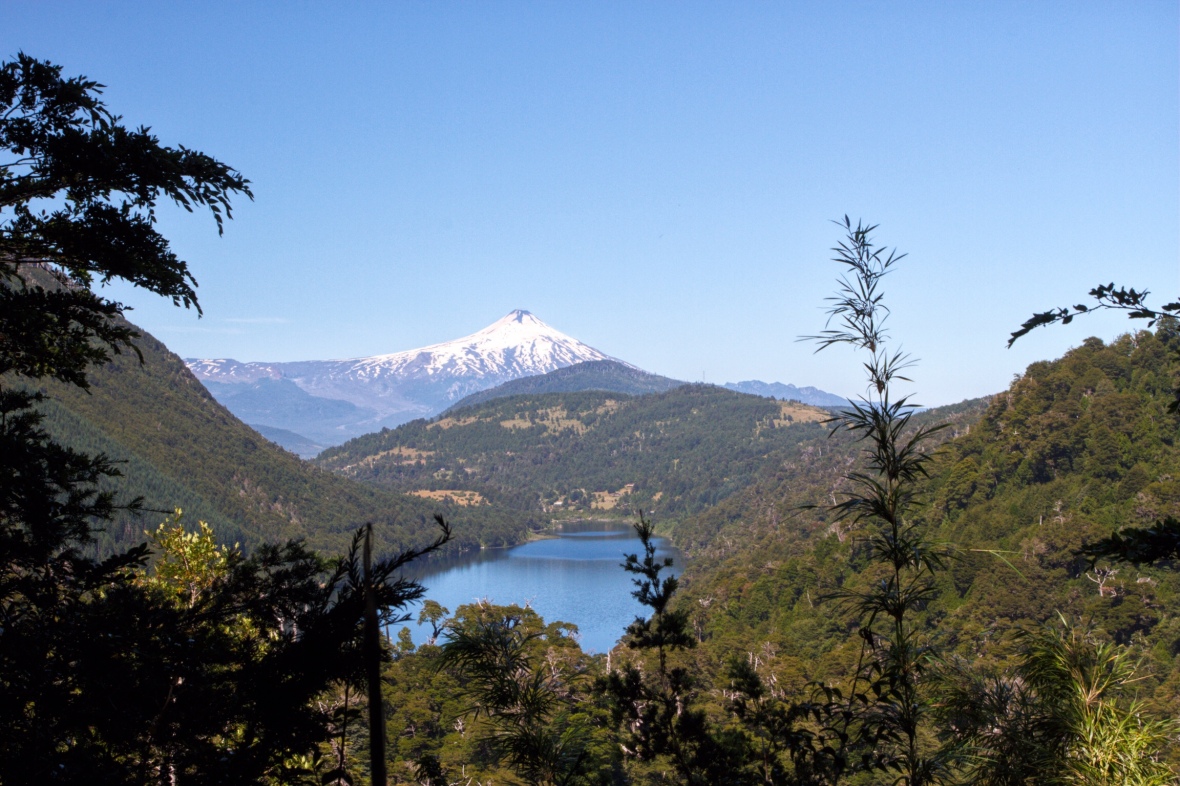 The hike certainly took us more than the time the park ranger told us and we nearly gave up at one point but we persevered and found some lovely lakes to enjoy. We even got chatting to two British couples, both doing a three month tour of Chile and Argentina.

In the evening we were happy to just go into town, have a meal and watch the sunset on Lago Villarica.

It was at this point in our trip that we began to have real problems with booking accommodation. I have to admit that we hadn’t done too much forward planning for our tour of Chile, blithely assuming we could find nice cabins or houses to stay in whilst we explored the countryside, birdwatching and hiking. The truth is that travelling in Chile in January and February is very difficult, with most decent accommodation booked up well in advance and all the major booking sites having very little to offer. So you are left with finding a place to stay somewhat by chance and our next accommodation showed this.

We wanted to move a couple of lakes down to Panguipulli. After much searching we found a place on Airbnb which had good reviews and listed as having a great view of the lake. It was a very pleasant trip from Pucón and the small town of Panguipulli itself seemed very ‘ordinary’ rather than touristy which we rather liked. Our cabin ‘with a view’ was a little way out of town but promised much. When we arrived, however, we found not the cozy cabin of the photos and reviews but a broken down shack. No way could we stay there. The owner did admit that he shouldn’t really have listed it on Airbnb as it wasn’t fit and agreed to refund the hire charge (but not the AirBnB charges).

So, now we were stuck with no place to stay. But we had noticed some bungalows next door which looked rather better than the hovel we had chosen. Might they be able to accommodate us? Well, the delightful Rado and Erika, a German couple, came to our rescue. They could just manage to fit us in for two nights, having had a cancellation, otherwise they were completely booked for the rest of the month. We heaved a sigh of relief and moved in to the cleanest, most well maintained place we have so far stayed in with gorgeous sunset views of the distant mountains. 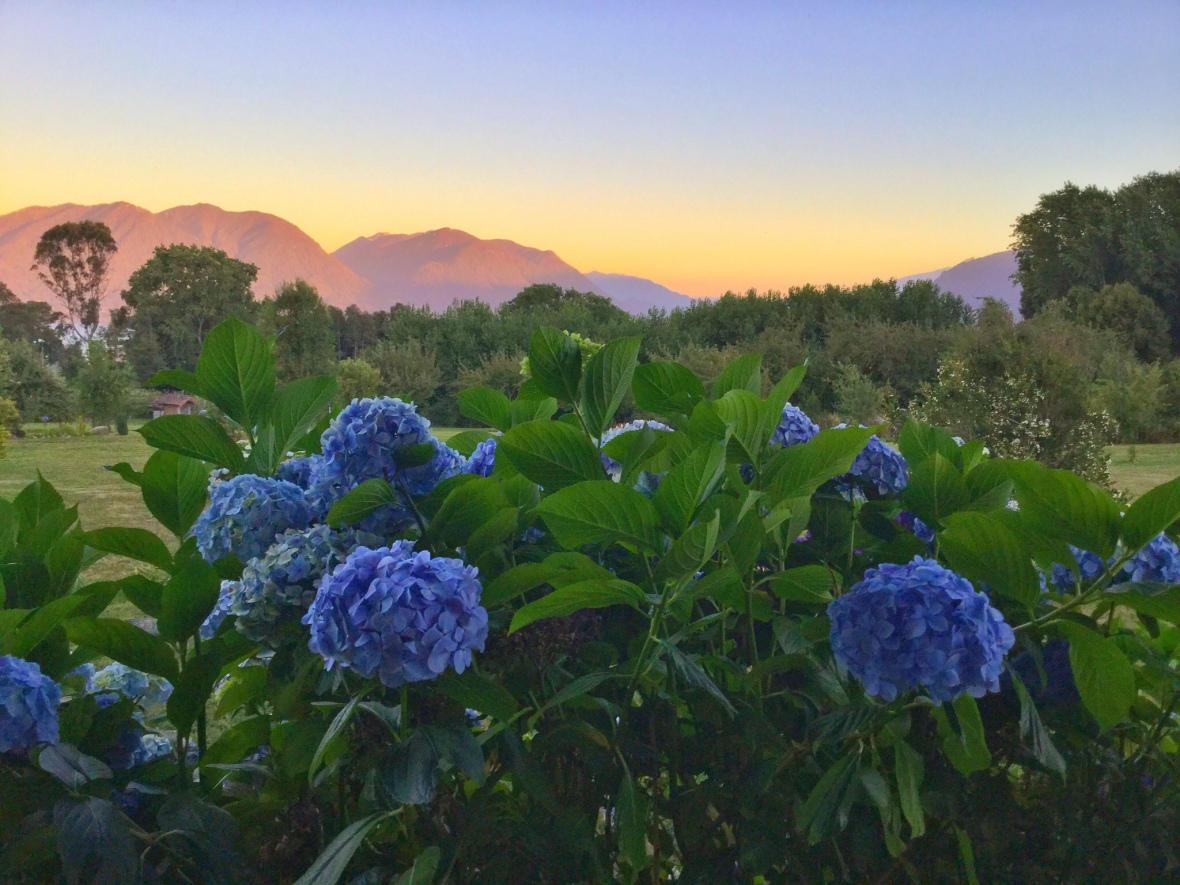 From Panguipulli you can do a circuit of seven lakes, the largest being Lago Panguipulli itself. We didn’t quite get around to seeing all seven because we didn’t want to be driving all day and there are times when you think a lake is a lake is a lake. The road to Puerto Fuy on Lago Pirehueico runs past some great mountain scenery and at Parque Huillo Huillo there is a wonderful waterfall.

At Puerto Fuy you can catch a ferry which will take you all the way up Lago Pirehueico so that you can cross over into Argentina but our car hire conditions forbade this. Also we wanted to continue our journey south and visit the national park at Lago Puyehue, which we had read was well worth visiting. Unfortunately, despite spending time on the internet and despite Rado from the bungalow also trying to find us somewhere to stay we just could not book anything. Given the difficulty we had finding our present rooms we just didn’t want to chance turning up in a small and remote area with nowhere to stay. The Renault may be roomy but we din’t fancy kipping out for a night in it!

So, with a bag full of wonderful cherries which Rado and Erika encouraged us to pick from their trees, we set off for Puerto Varas, the major tourist town of the Los Lagos region, and set upon the shores of the largest lake, Lago Llanquihue (pronounced schwan-key-hwee). We made good time and sat in an internet cafe trying to come up with some accommodation. If a property showed up as being available we either couldn’t get hold of the owner or, when they did come back to us, it was no longer vacant.

We ended up staying in a Hospedaje (rooms in a family house) hosted by the lovely Lorena for a couple of nights before moving to some cabins we’d managed to find in town. These suited us better because we could come and go as we pleased and have a very basic kitchen in which to make breakfast and lunches.

Llanquihue boasts not one but two Volcanoes so it outdoes Pucon on that score. Although still crowded it doesn’t have the same tacky Blackpoolish feel as its northerly neighbour and we have come to quite like the place, even if we have stayed rather too long here.

Volcan Osorno dominates the skyline with its perfect cone shape. It looks exactly like a volcano should, though it is not active at the moment. In fact, you can drive high up on its flanks where there is a ski centre in winter and a wonderful panoramic view in summer.

The other volcano, Volcan Calbuco, can be seen from up high on Orsono. Imagine what it was like when these two were slinging rocks at each other like some ancient giants.

Chile’s oldest national park, Vincent Perez Rosales, is situated at the eastern end of Llanquihue. It contains Lagos Todos Los Santos where, once again, you can take a ferry and a short road up to the Argentine border. It would have been nice just for the ferry ride but when we visited the park it was so overcrowded that we just couldn’t face doing anything there.

We did take a drive around Lagos Llanquihue in a westerly direction to the delightfully named Frutillar which was founded by the aforementioned Vincent Perez Rosales in the 19th Century. It was developed by German settlers arriving from Hamburg and other ports and still retains much of its Germanic architecture. It is now renowned as the ‘city of music’ with classical and other concerts being given at the impressive concert hall on the shore of the lake

Our final two days were spent escaping the crowded Lakes region, southward towards the Carretera Austral. First we took a lovely route to the Cochamo Valley where there is good hiking. It is another of those routes into Argentina, though this time completely on foot and by a very strenuous climb. The weather was very cloudy and we didn’t get to see much of the hiking route but it’s clear that it would be a glorious journey in the right conditions and if you were prepared for a 5 day hike.

On our last day we discovered the Alerce Andino national park which is noted for its bird and wildlife, including puma, pudu deer and other interesting animals. Our walk started well but before too long the rain started teeming down. Birding in the rain is never a good option so we cut short our walk. We did see several lovely fox cubs when we got back to the park headquarters. They are obviously used to people and one of them sat quite contentedly whilst I photographed him or her.

We gave a lift to a lovely young couple of Chilean backpackers as we left the park. We just couldn’t pass them by with the rain pouring down and spent the time back to the main road discussing travels. Like us they were going south but whereas they were relying on their thumbs and expecting to travel only a few hundred kilometres we were returning to base to get ready for our flight to Punta Arenas and the fabled Torres del Paine National Park.