We have had some very interesting travelling companions on this trip; a travelling musician, a Dutch couple who spoke perfect English, a young Chilean couple studying eco-tourism who were soaking wet and grateful for a lift in the Carretera Austral. But we were not prepared for our next encounter aboard our flight from Puerto Montt to Punta Arenas in the far south.

We had managed to secure seats 1A and 1B at the very front of the aircraft and were just thinking that we had the row to ourselves when the steward brought on the last passenger; an elderly looking man who gave us the broadest smile which showed that he only had two peg-like teeth left, and said something unintelligible in Spanish whilst insisting on shaking our hands. The steward then unwrapped a lollipop for him and sat him down with a child’s colouring book and some crayons.

It seemed that our latest companion had some form of dementia but he was such a wonderful old boy. We couldn’t really understand what he was saying to us but someone in the seat behind told us that the man thought he was on a bus and that everyone around him were children. In fact, there were two unaccompanied minors in the right hand row of seats; a teenager looking after her Down’s sister who at first was very shy but who in the end had us clapping and smiling. It was a most unusual flight but incredibly entertaining and heart warming. Waiting for our luggage at the carousel we were quite emotional when we saw the girls meet their relative and the old man greet his companion, who may or may not have been his wife. We went up and shook his hand and bid them a fond farewell. 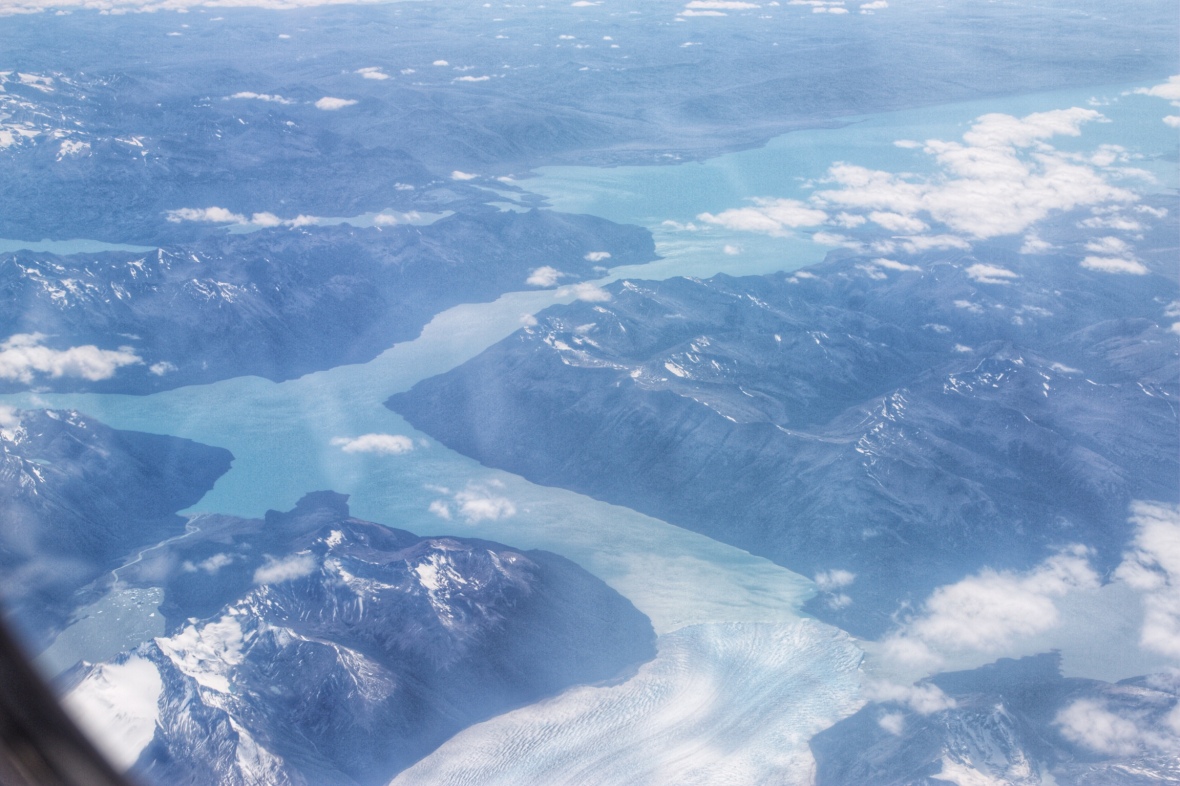 For once we had a ‘normal’ 4WD car so drove off in some comfort, which was just as well given that we had to cover 249 klms to get to Puerto Natales. But as soon as we started driving we relaxed into the scenic wonder which is Patagonia – wide open skies and grasslands for miles – familiar to us from our time in Argentina three years ago. A few hours later we pulled into Natales and found the hostel we had booked on the edge of town run by a delightful Chilean couple.

Puerto Natales is located in the ‘Ultima Esperanza’ (meaning Last Hope) Province. It was so named by a sailor, Juan Ladrilleros, in 1557 as he was searching for the Straits of Magellan which separate the Chilean mainland from the Pacific Ocean. The waters in this region are a maze of channels and fjords and it’s not surprising that Ladrilleros’ discovery was subsequently lost for nearly three centuries until HMS Beagle eventually found the same navigation.

Puerto Natales itself was only founded in 1911 when it became a port for the sheep industry which was booming in Patagonia at the time. Two large frigorificos (refrigeration plants) were built in the area but in the last half of the 20th century the industry declined and now one of the frigorificos has been turned into a luxury hotel. 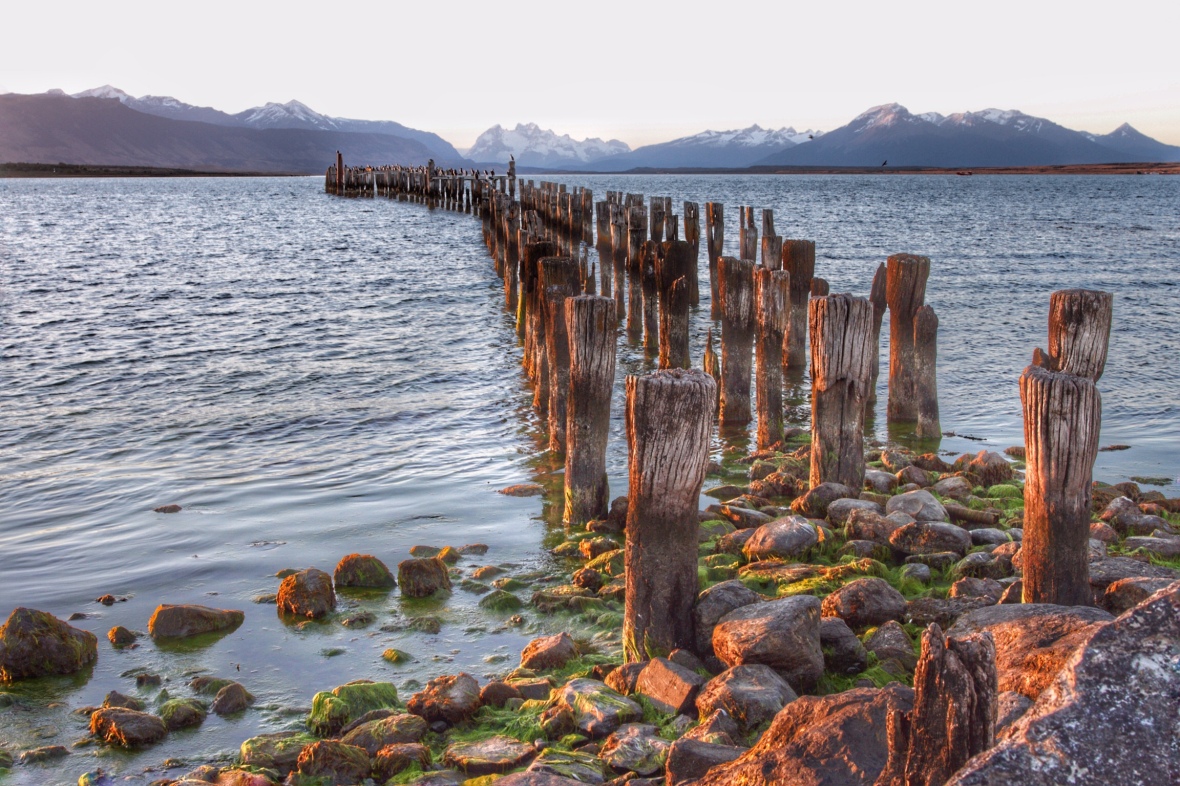 Puerto Natales now caters for the thousands of tourists who come here every year to visit the Torres del Paine national park and we were as eager as anyone to get amongst the mountains. But Natales itself is 150 klms from the park entrance so it’s quite a drive to get there, especially as the roads are in a poor state in parts. You can cut the journey time down by staying in one of the few hotels actually in the park but not only do they cost an arm and a leg, they were also fully booked so we had no choice but to make the long journey each day.

There used to be several roads you could take to get into the park but closures due to engineering work means that you can now only enter by the Amarga gate. Our arrival unfortunately coincided with several coach loads of trekkers so we joined a very long queue to buy our entrance tickets. But once in the park we were able to get close up views of the three towers of Torres. 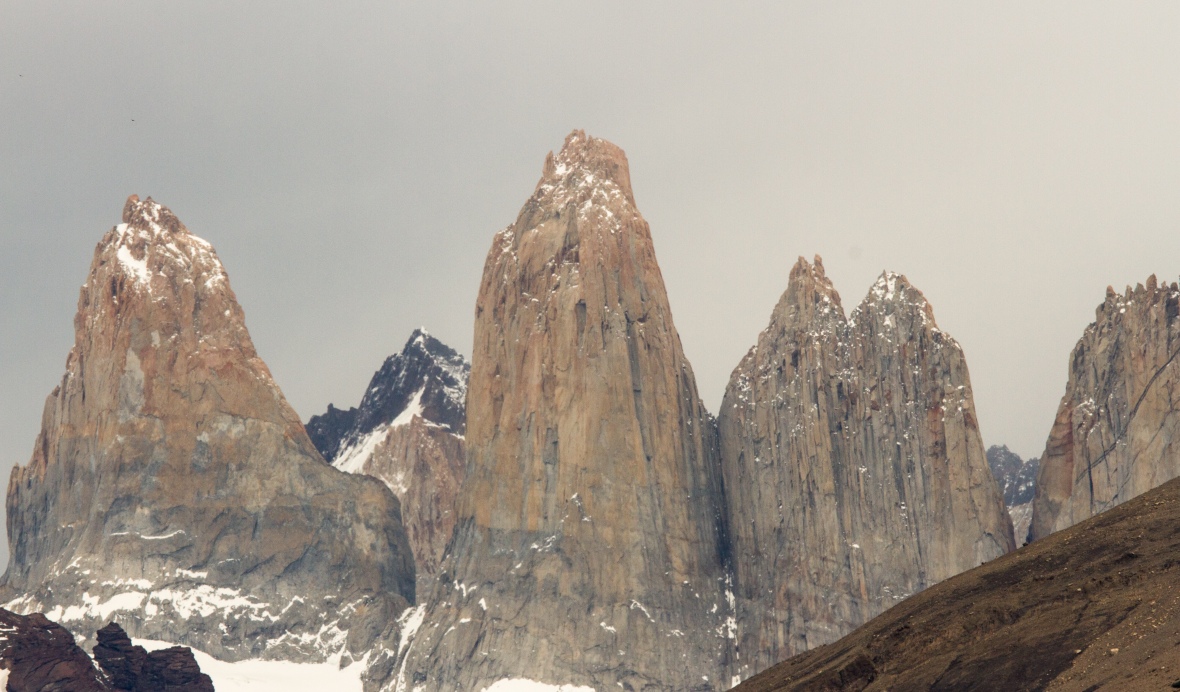 Many trekkers come here to undertake one of two multi-day treks; the ‘W’ which, as the name implies, makes a sort of W shape going into the foot of the towers at several points. This is by far the most popular trek and takes three days, either camping or staying in refugios, basic hut accommodation. The ‘O’ route circumnavigates the whole of the mountains and is a much more serious affair.

For the day trekker like us there are a number of walks lasting anything from 1 to 8 hours. We started with the slightly challenging Condor Lookout route. Condors are the largest species of Vulture and are an iconic image of the Andes as a whole. In Patagonia you can see them soaring the ridges, easily identifiable by their size and the white ring of feathers around their throat, like they are wearing a woolly ruff.

Going up this route we could see some guano encrusted holes in the rocks and sure enough a condor swept majestically by us.

The final scramble up onto the rock pinnacle was a little hairy but it was worth it for the view it afforded even if the weather was somewhat cloudy and windy.

Wind and bad weather are very much a feature of Patagonia in general and Torres in particular. You can never rely on having clear, cloudless days even in summer and the tops of the mountains can be covered in clouds and rain for weeks at a time. We were reasonably fortunate; not sparklingly clear skies but not too much rain either. It was windy though, especially on our second day in the park when we walked around part of Lago Grey getting distant views of the glacier and a lone iceberg which had broken off some time ago.

The strength of the wind made for an uncomfortable walk but for one of the guests staying at the same hotel as us it was even worse because he got blown over and knocked unconscious. He was found by another walker and taken to the ranger station for some very basic first aid. He certainly looked like he’d been in a fight by the time he got back to the hotel and over the next few days his bruises came up a treat.

The scenery in Torres is pretty spectacular. It is crowded with visitors and yet it is large enough to absorb them. We spent many a happy hour driving around the park, stopping for photography, to do a short walk or just taking in the view. One of our dearest friends, Sally, says that she can sit all day by the sea, just watching the light on the water. Well, for us, mountains offer the same interest. Even though in Torres your eye is always going to be drawn to those three pinnacles of rock for which it is famous, you can still sit and watch the sunlight coming and going, the clouds gathering and dispersing and even the rain sweeping in, changing the face of the mountains constantly.

Although you can never tire of the views there’s plenty of wildlife to see. Guanaco line the sides of the road, the lakeshore and the pastures in large herds. Rhea, a flightless bird like the Ostrich, roam the grasslands, foxes scurry across the paths and there are signs warning parents not to let their children wander off alone as these highlands host Puma, though you’d be pretty lucky to see one. 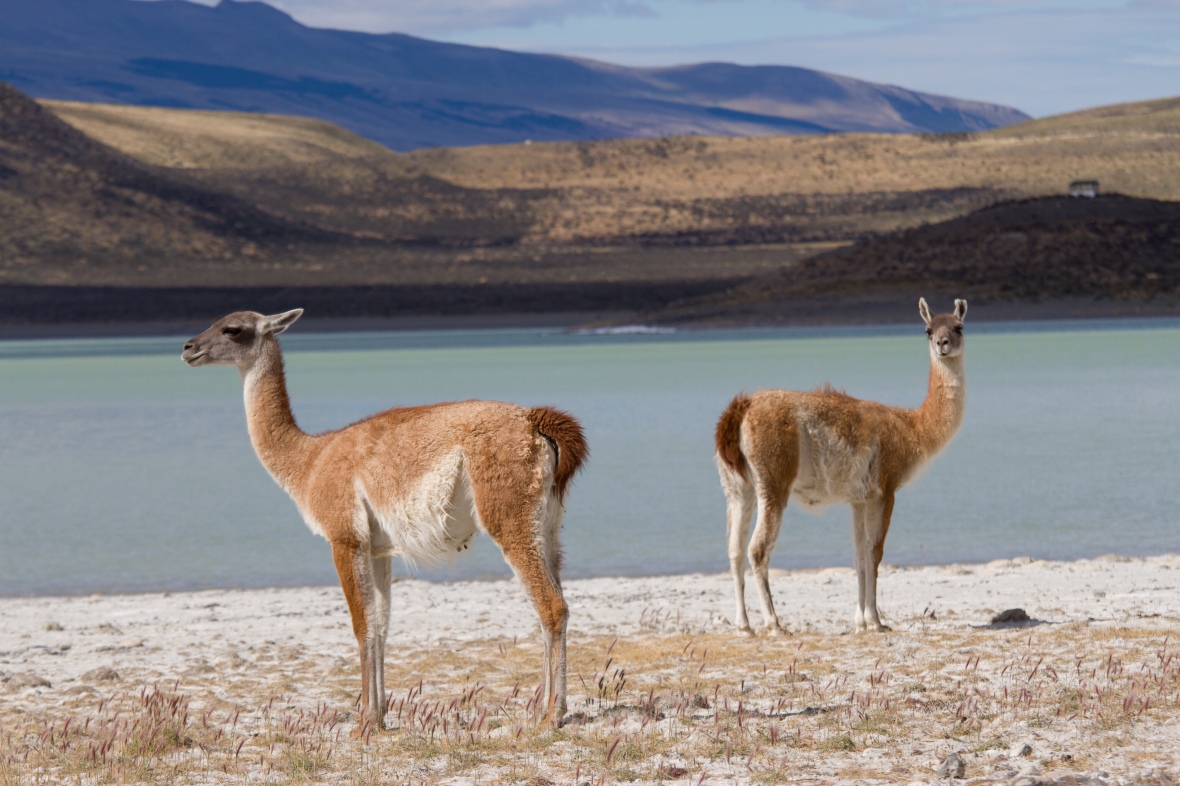 And, of course, there are the birds. Condor, Black Crested Caracara, Black-chested Buzzard-Eagle (the taxonomists obviously couldn’t agree on that one), Flamingo, ducks and, a personal favourite, the Magellanic Woodpecker. We were in birdwatching heaven – incredible snow crusted mountain peaks to look at and wonderful birds to discover. Our three day pass to the park was well spent. 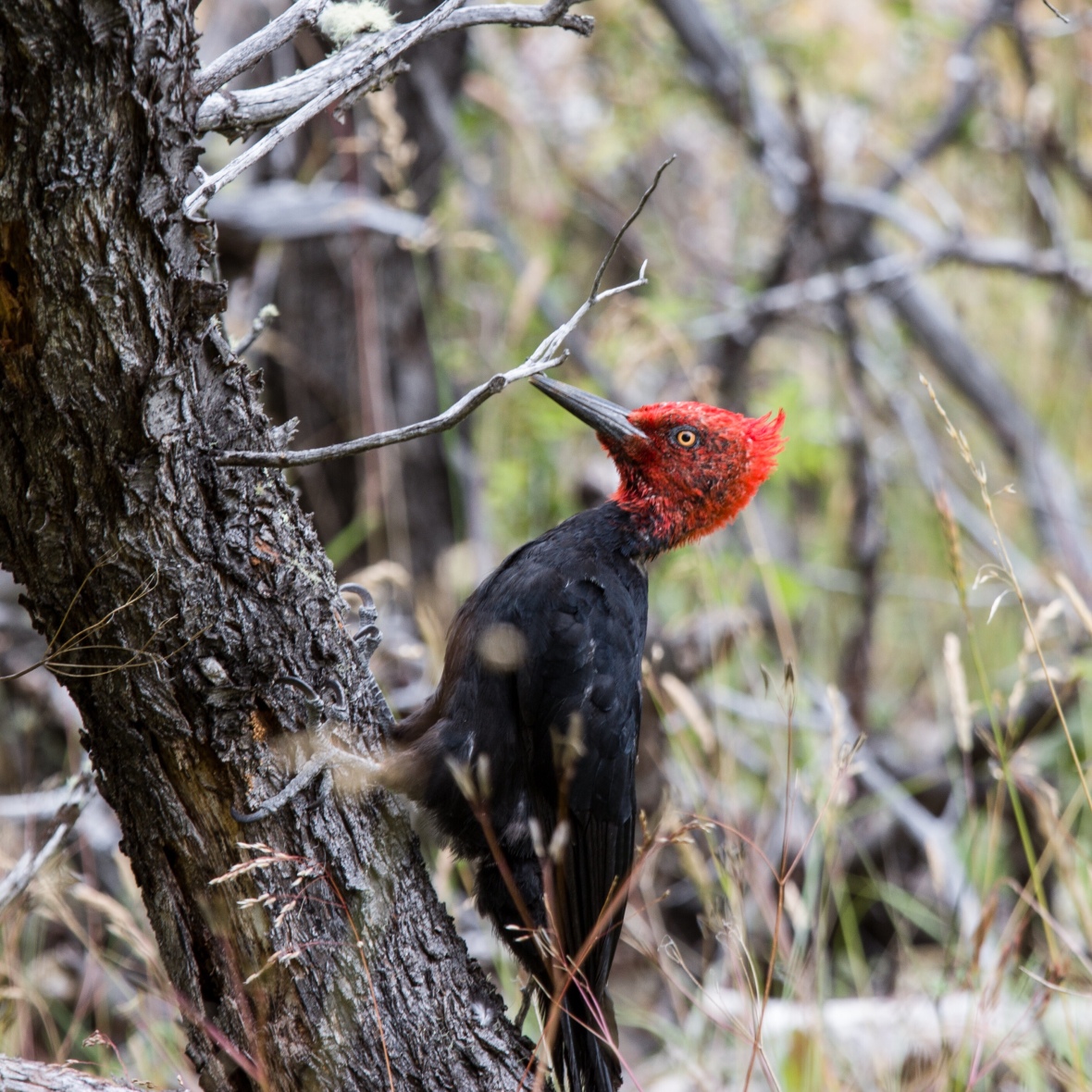 Even outside the Torres del Paine national park the scenery is interesting with wide open grasslands, huge estancias full of sheep and horses, beautiful lakes and, at Puerto Natales, ocean inlets, teeming with gulls, cormorant, Southern Lapwing, and lovely families of Black-necked Swans. It’s certainly worth coming to the ends of the earth to see. 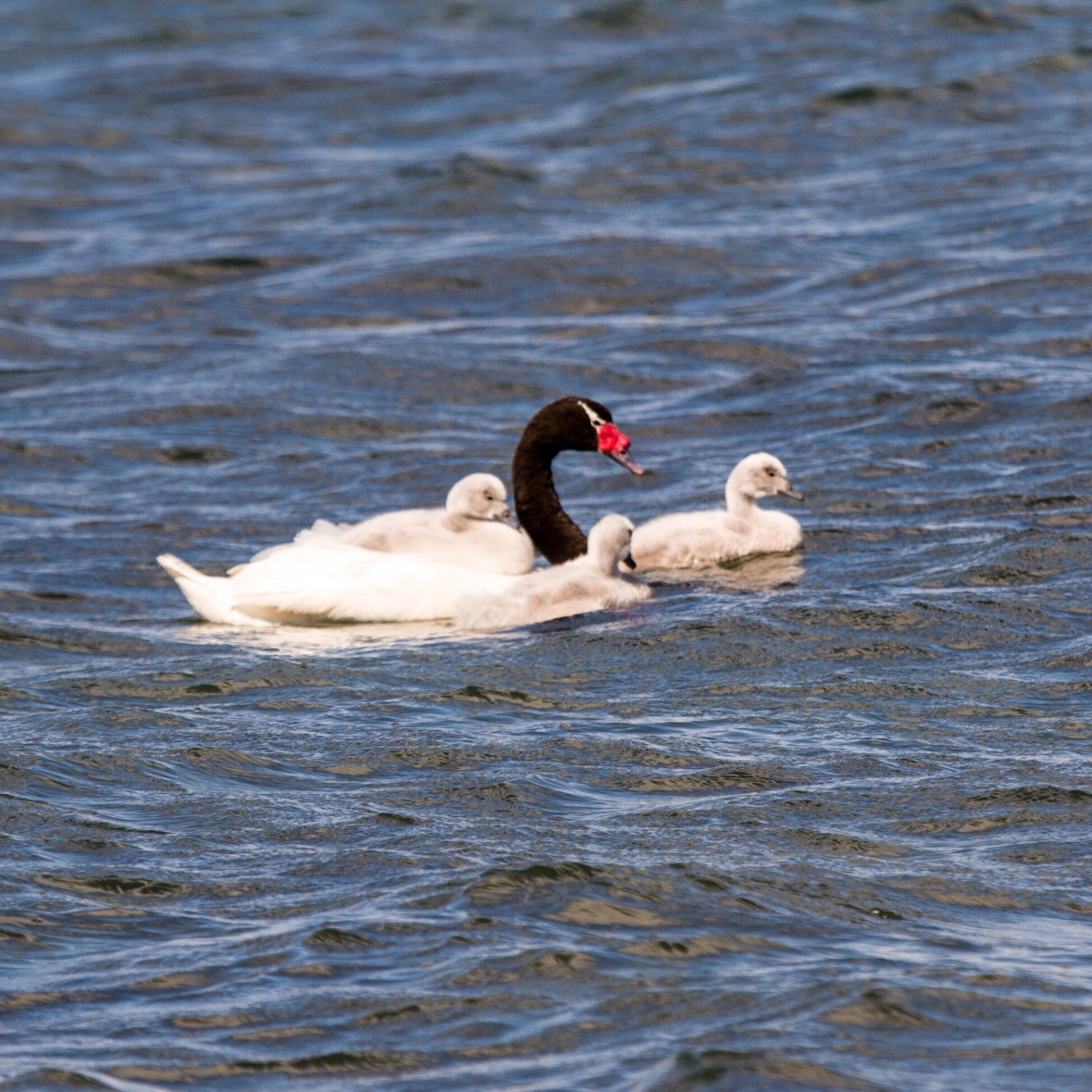 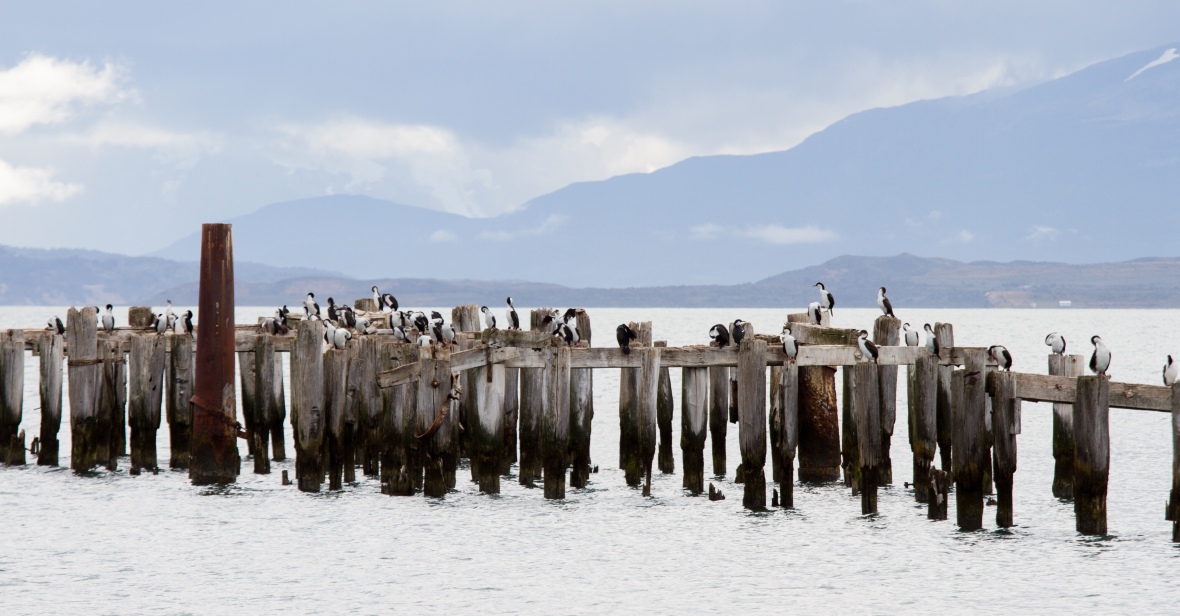 We’ve had a great time in Chile; sometimes frustrating, crowded and noisy but also spectacularly beautiful. We’ve met some wonderful people, shared travellers’ tales and found Chileans to be kind, helpful and friendly to a man. And none more so than on our last night when we met Rodrigo and Ingrid in a lovely cafe we’d found in town. They’d been married just over a year and lived in La Serena in the north. It’s the one place we’d have liked to have visited because it’s a great wine growing region and, in Elqui Valley, home of the great Pisco Sour.

Our new found friends plied us with advice on what wines to buy and then Rodrigo proposed going to another bar to try out some wine. Well, how could we resist on our last night? We somehow managed to find a really great wine shop and tasting room which we wished we’d known about before. Rodrigo selected a wonderful Syrah from the Limari Valley, up near Serena. And we drank and chatted the night away. It was a great way to wind up our trip. 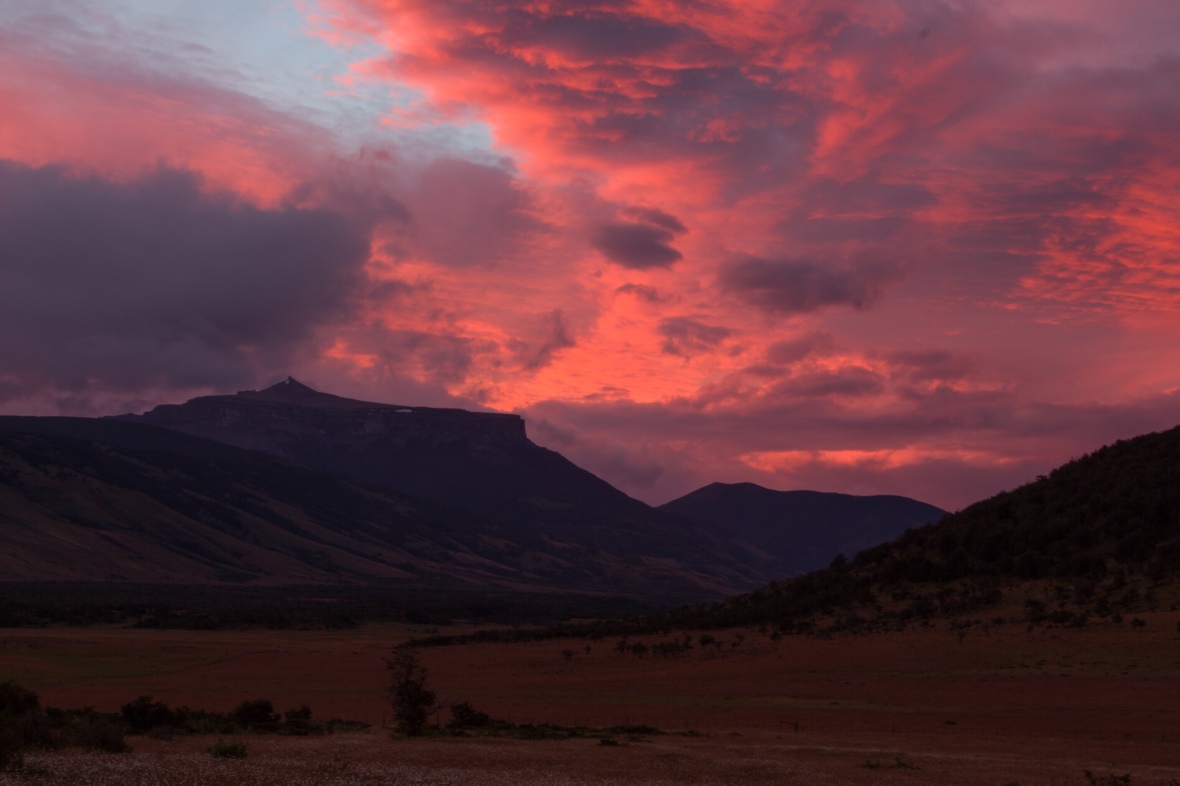