We joined our vessel, MV Mermaid I, at the port of Benoa. It’s a really comfortable boat, usually used for diving trips. The cabins are spacious and well presented, with air conditioning, a hot shower and a king sized bed. There’s a smart lounge on the middle deck, plenty of room in the dining area, a top deck with reclining sun-beds and a great seating area in front of the wheel-house from where you can scan for cetaceans and birds. There’s a large staff ready to cater for your every need, including excellent cooks.

But, it was not an auspicious start to our travels to Komodo. We should have set sail around 3pm but it seemed that one of the ship’s generators required a spare which took an age to get through the Denpasar traffic. So we sat in port for a couple hours waiting to get underway, all the while thinking of whales and dolphins we might be missing. But it did gives us time to unpack and settle in and get to know the layout of the boat.

It was getting dark by the time we set sail which was a shame as we didn’t see much of Bali or Lombok as we passed by but we were happy to be underway. And as a bonus we were able to view a video of the previous trip made by the onboard videographer, Marcelo. It certainly whetted our appetite for what was to come.

The ship sailed all night, which was a little uncomfortable as the engine noise and rocking motion made it a little difficult to sleep. Dawn found us still underway and still passing the large island of Lombok. We did have distant sightings of Melon-headed whales and then a group of Fraser’s Dolphin which provided some good views.

As we sailed on towards the island of Sumbawa one of our group, Cait, saw a large flock of seabirds around a few fishing boats and this is often a sign that dolphin may be in the vicinity. Fishermen keep a good lookout for dolphin splashes because they know that they might be chasing tuna. And, sure enough, we soon saw a mixed pod of Spotted, Spinner and Fraser’s Dolphin. To see dolphins riding the bow wave and then leaping into the air is a real joy and we spent a happy hour or so in their company. 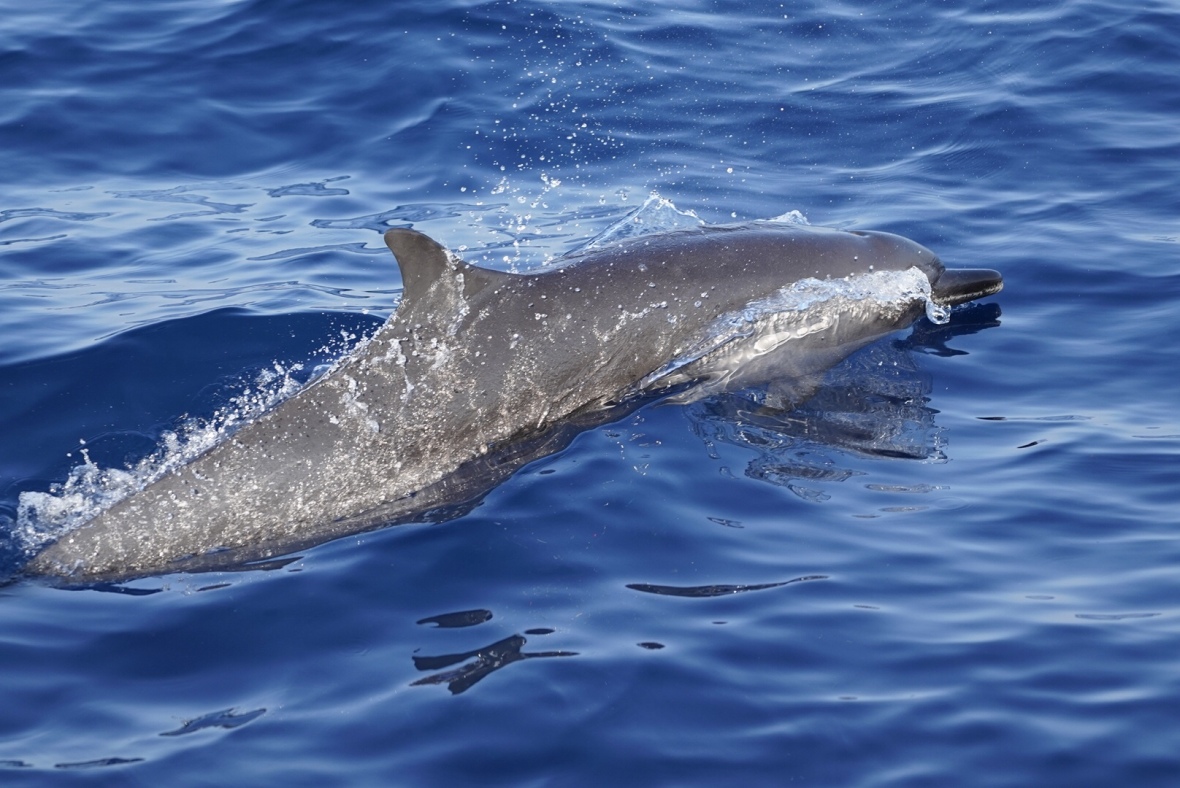 The island of Sumbawa is dominated by the Gunung Tambora Volcano which in the past erupted and changed the climate of the planet causing a year of winter throughout Indonesia and further afield. We were assured by our leader that there was no likelihood of it blowing again whilst we were there.

Chas’s trips are always a combination of cetacean watching, which also includes looking for other wildlife such a seabirds, sailfish, etc. and snorkelling (or diving for those who want to do it) on the reefs around the islands. Before each snorkel we are given a briefing by the dive master telling us what to expect and what dangers to look out for. Our first snorkel was on Angel reef off Mojo Island so we all gathered at the back of the boat and kitted up. Jane and I wear shorty wetsuits even in warm waters like these. 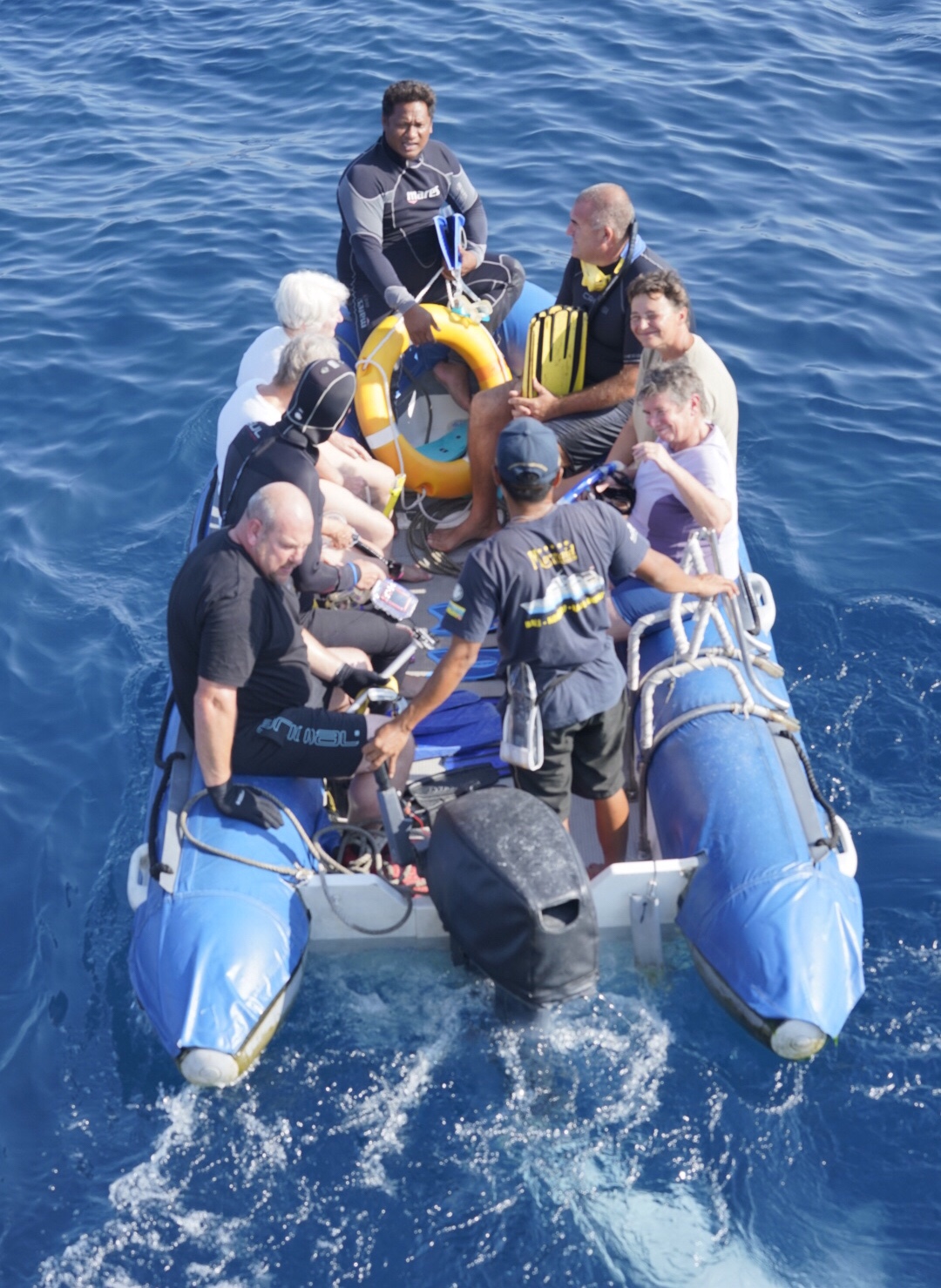 The coral here was damaged a few years ago by warm seas, something which is happening all around the world with increasing frequency, and whilst the coral is returning it was not as extensive on this reef as other places we were to visit. However, the sea life was excellent and included Hawksbill Turtle, spotted ray and many fishes. Jane even saw a Banded Seasnake. “Is it poisonous?” she asked. “No,” said Chas, “you can cut it up and eat it and it won’t poison you.” And then he added, “But it is venomous so if it bites you it could kill you.” The seasnake preys on, among other things, crabs which have nasty pincers so it needs the venom to quickly disable its prey.

In fact, Seasnakes are amongst the most venomous in the world but the Banded Seasnake’s jaws are quite small so you probably have to poke it with a finger to get bitten. Chas later told us an amusing story. He was snorkelling with his son, Robert, and they noticed a seasnake swimming close by and started following it. But the water was getting shallower, in fact, too shallow even for the snake, which promptly turned around and started coming towards them. Robert dived off into deeper water but Chas ended up stuck on the rocks hoping that the snake would just swim on. Chas breathed a sigh of relief when he noticed that his son had stopped swimming, had his head out of water and was laughing. He asked Robert what was so funny and it seems that, far from swimming innocently on, the snake had decided to investigate Chas’ voluminous swimming trunks and had started swimming up his thigh before presumably deciding there was nothing there worth biting! I think Chas found the incident rather less amusing than his son.

After our snorkel we moved on to moor up at Satonda island so that we could have an early morning walk. At sea the temperature is quite pleasant and you can always find shade on the boat. But on land it gets very hot very quickly so by 7 am we had eaten a light breakfast and were getting in the rubber dingies to transfer ashore. Like many of the islands around here Satonda is a collapsed volcano and it now has a lake at its centre which has a mix of saline and fresh water. It was a pleasure to get off the boat for a change and have a walk around. There were birds around and crab eating macaques plus a lot of butterflies, attracted by the relatively salt free water.

The Flores Sea is rich in dolphins and whales. Indeed, it is where the story of Moby Dick is set and, I was surprised to learn, based on an actual incident. It seems that in the eighteenth century a sperm whale did, in fact, sink a whaling ship, The Essex. In those days whaling boats were wooden and more than one was sunk by a whale being pursued. However the whale which sank the Essex was not white like Moby Dick. Melville combined the story of the Essex with sightings of an Albino Sperm whale seen in the Flores Sea around the same time. We were not expecting to see albino whales but we did manage to get some good views of pilot whales. We also had some distant sightings of a Pygmy Killer Whale – like its full size cousin, not a whale at all but a dolphin. They’re not all friendly and cuddly, you know.

We moved on to Sangean Island which is once again dominated by a volcano, active this time. In fact it last blew 4 years ago, though thankfully it didn’t cause much damage. We should have snorkelled at the hot rocks where columns of hot water bubble up but the current prevented it. So we were taken to Lighthouse Reef (which does, indeed, have a lighthouse ashore at the end of it). 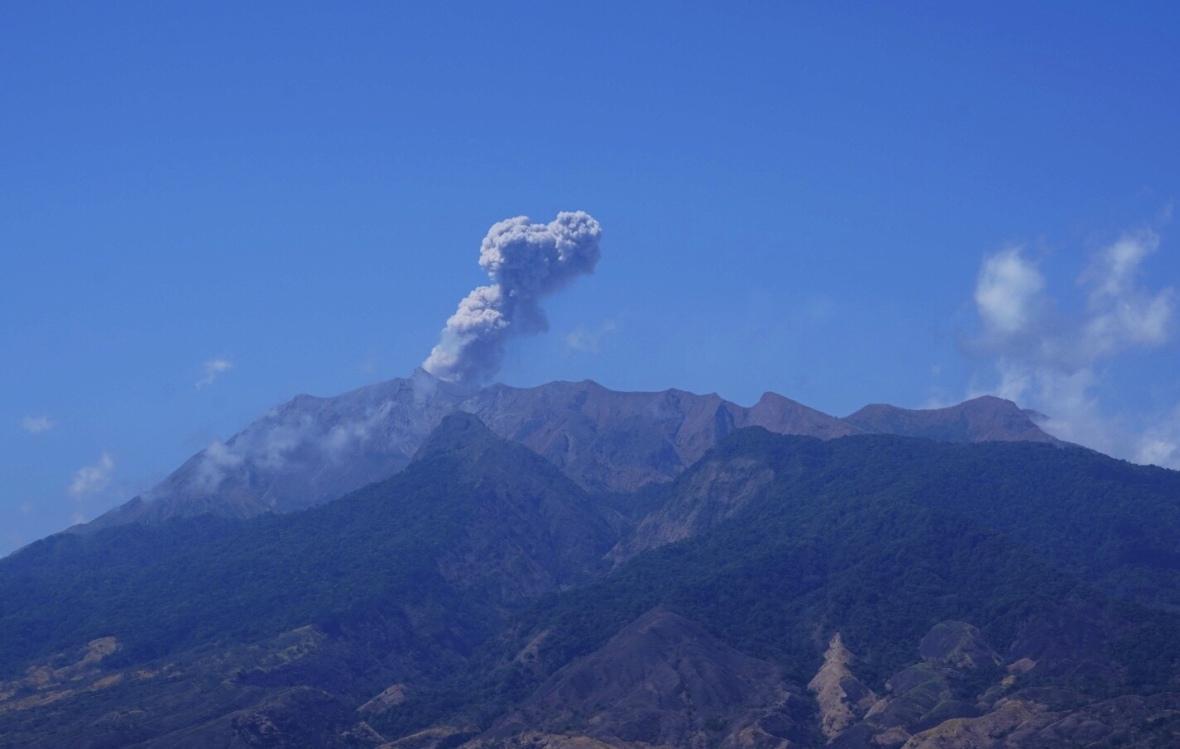 The pattern of our day was, get up about 5.30 am, have a ‘light’ breakfast (muesli and cereals, toast, jams, fruits, yogurts, etc.) between, 6-7 am, get into our swimwear and shorties, board the boat and snorkel for an hour or so, back on board for a shower and ‘big’ breakfast (bacon, eggs, etc, more toast, croissants, fruit and endless cups of tea/coffee) before a hard morning chasing cetaceans, cooked lunch at about 1 pm, depending on what mammals might have turned up, more cetacean watching in the afternoon, a late afternoon snorkel, pre dinner video or presentation by Chas followed by a huge buffet dinner and early to bed, ready to do it all again the next day.

After Lighthouse Reef we moved on to Gili Banta seeing Pilot, Melon-headed and Pygmy Killer whale, Fraser’s dolphin, which are rather shy, Rissos Dolphin which appear quite white streaked and tend just to wallow on the surface, Common Bottlenose, which will often bow ride and jump athletically and Spinner Dolphin which are the most entertaining and will often ride with you and spin in the air, if they feel like it. 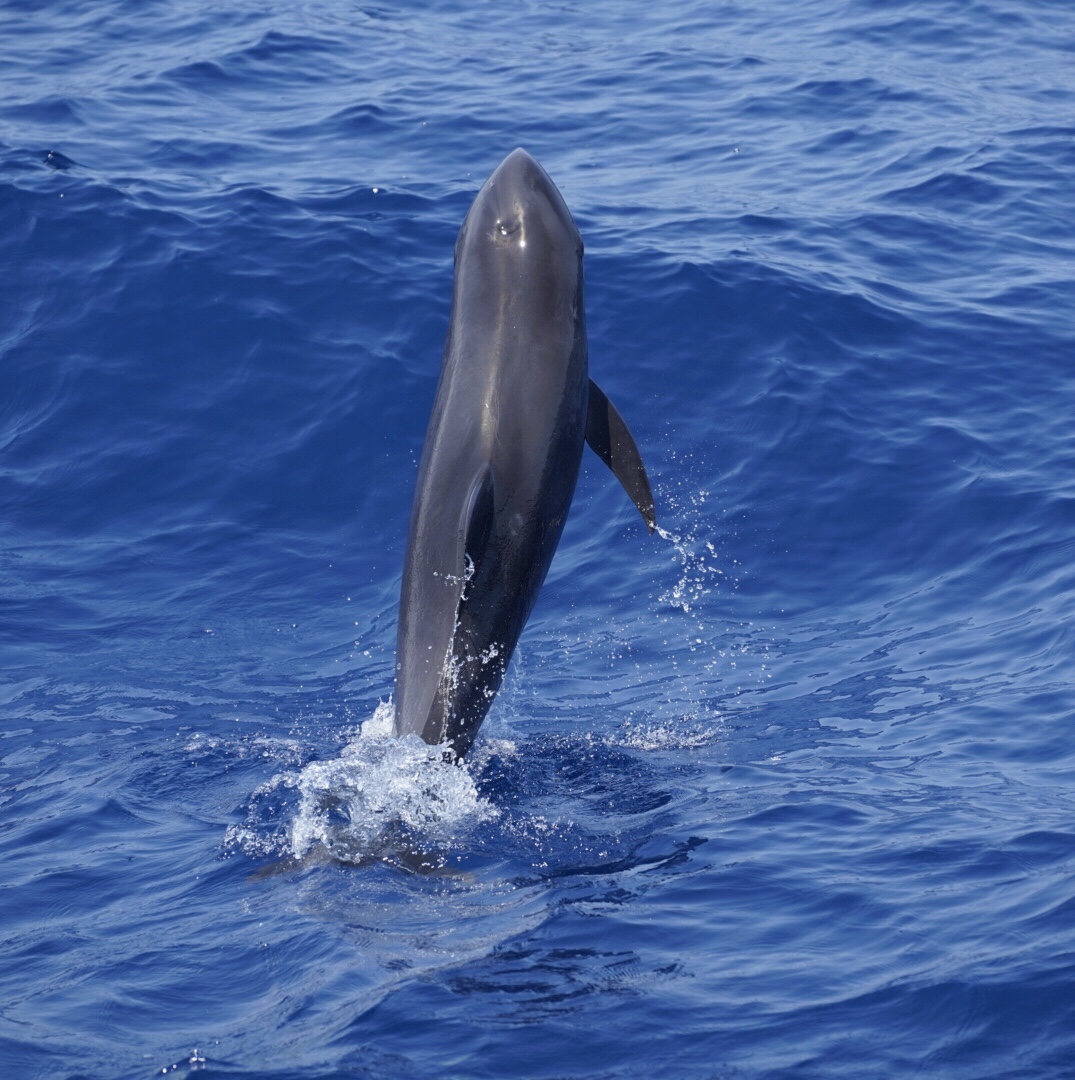 Before each snorkel we are given a detailed briefing. Mermaid is normally used as a live-aboard dive boat; it’s only Chas who uses it for wildlife and snorkelling trips. So the dive staff are very expert at keeping you safe and at taking you to some incredible reefs, usually well away from other tourists. In fact, you can dive on the reef if you want and several of the guests did.

At this site, called Yellow Wall, we were told that the water would be considerably colder than hitherto. But the colder water also meant better conditions for the reef – no bleaching and a wide variety of corals. Getting in the water was a bit of a test to be sure but you soon forgot the cold because of the sheer beauty laid out before your eyes. The reefs of Indonesia are reckoned to be amongst the finest in the world and, on this evidence, they certainly are. The Wall, as its name implies, is a cliff face and for some this is uncomfortable snorkelling, but it does mean that you get steep drop offs and an incredible variety of feather star coral. They came in every hue imaginable and it was like slowly flying over a vast oceanic garden. Add the other soft and hard coral, the anemones and the wonderful fish and it is easy to lose yourself for an hour or more. Only the cold drove us out of the water and we all climbed back aboard the boat to be greeted by hot lemongrass and ginger tea. The staff on board are really fantastic and they know how to treat you.

I mentioned earlier Chas’s sea snake episode. Well, in the deep recesses of the night a song came to me and later on, to add to the usual evening entertainment, Jane and I performed it to the amusement of all. Sadly, we lacked a ukelele because the tune was based on George Formby’s ‘Leaning on a lampost’. If you want to sing it for yourself here are the lyrics:

I was snorkelling in the water

On the way down to Komodo

When a certain little seasnake came by

Oh me, oh my, I hope that he wont swim up me thigh

There’s nobody here to prevent it

If he goes and bites on me bent bit

I know that I’m going to resent it

They say that its not poisonous but venomous – who cares

I was snorkelling in the water

On the way down to Komodo

When that serpent went and swam up me thigh

He’s still looking for me todger

Someone help me please I think I might die.

One thought on “Chasing Dragons”