It had rained overnight and was still wet and overcast as we left Methven. The weather seems to do this to us on moving days. Our route was now going to be something of a dogleg travelling first to the West Coast before returning to the East Coast a couple of days later.

The Southern Alps run, rather like a scoliotic spine, down the back of the South Island. I think of the neck end being at Fairwell Spit and the tail end at around Preservation Inlet in Fjordland. In all of this length there are only three road passes you can take through the mountains to get from east to west (or vici versa) The Haast Pass will take you from Queenstown and Wanaka to Fox Glacier and then upwards, the Lewis Pass will take you from Kaikoura and Hanmer Springs to Reefton. But to go from Methven the best route is the most famous and well travelled of all – Arthur’s Pass (named after Arthur Dodson who first mapped the route) so this is the road we took.

We could have retraced the previous day’s journey along the Coleridge Road and then taken the narrow Lyndon Road but it’s a gravel road and signs warned that there was a ford at the end of it by Lake Lyndon. Given the rainfall of the previous night, and the fact that the clouds were down below mountain top level, we decided to go via the much longer main road route passing through Glentunnel, Sheffield and Springfield.

It’s a good drive along the SH73 taking you past the interesting rock formations of Castle Hill onto the Waimakari River valley. It’s around about here that you join the train line which runs from Christchurch over to Greymouth. The autumn colours were beginning to show which made for a pleasant journey. 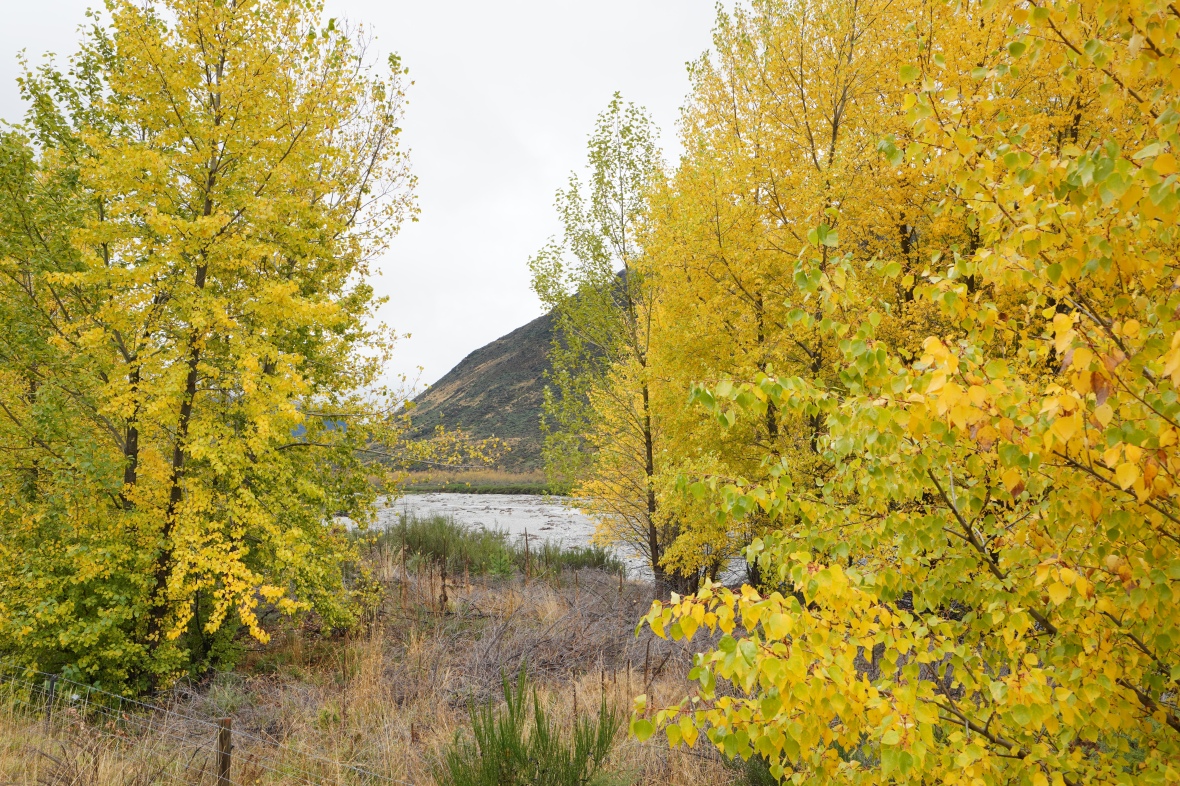 The train ride must be a wonderful journey in good weather but the higher we got into the mountains the more the clouds gathered. We stopped for a coffee at Arthurs Pass village which more or less sits on the high point of the route. To be honest, it’s not our favourite spot in New Zealand and this time the weather didn’t help. By the time we had crossed the divide into the west side of the Southern Alps the rain was teeming down. 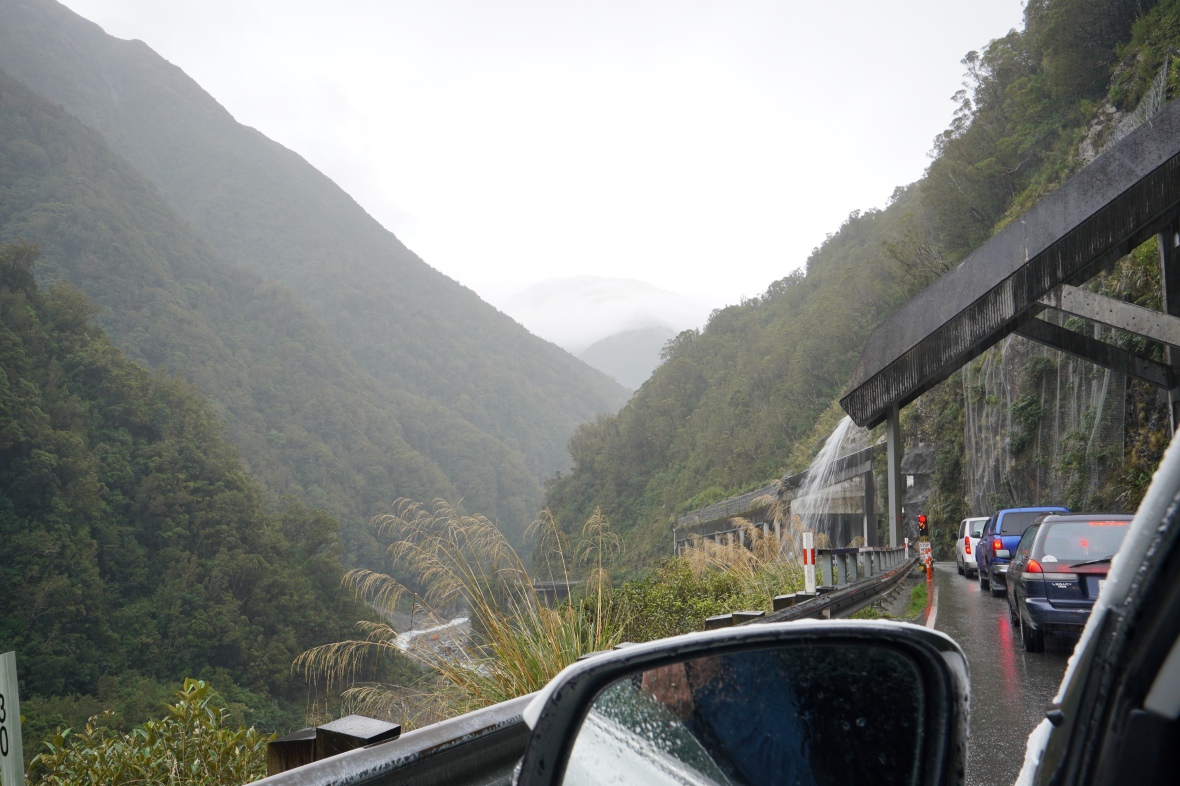 The rain was beginning to ease as we made our way down the Otira Valley, which is a rather lovely spot, more lush and verdant than the east side of the mountains and soon opening out into the western plain. It was to be our first and only visit to western South Island this time around.

The primary reason why we had come here was to visit some friends who live in Paroa on the outskirts of Greymouth. We first met Irene and Murray back in 2013 when we lodged with them in Fox Glacier. We hit it off instantly and became firm friends. So we were eager to visit them in their new home in Paroa, just outside Greymouth.

Irene and Murray were both born in Cobden, across the River Grey from Greymouth. They have moved around New Zealand (as many Kiwis seem to do) but have now returned to their roots. In fact, they used to own the local dairy (corner shop) which is opposite the house they now live in.

We had a wonderful time catching up before our friends took us on a tour of Greymouth, Cobden and, the following day, their local beach from where, on a clear day, you can see Mount Cook in the distance. It was so lovely to spend some time with them, to share a wonderful meal cooked by Irene and to sit and chat with friends. 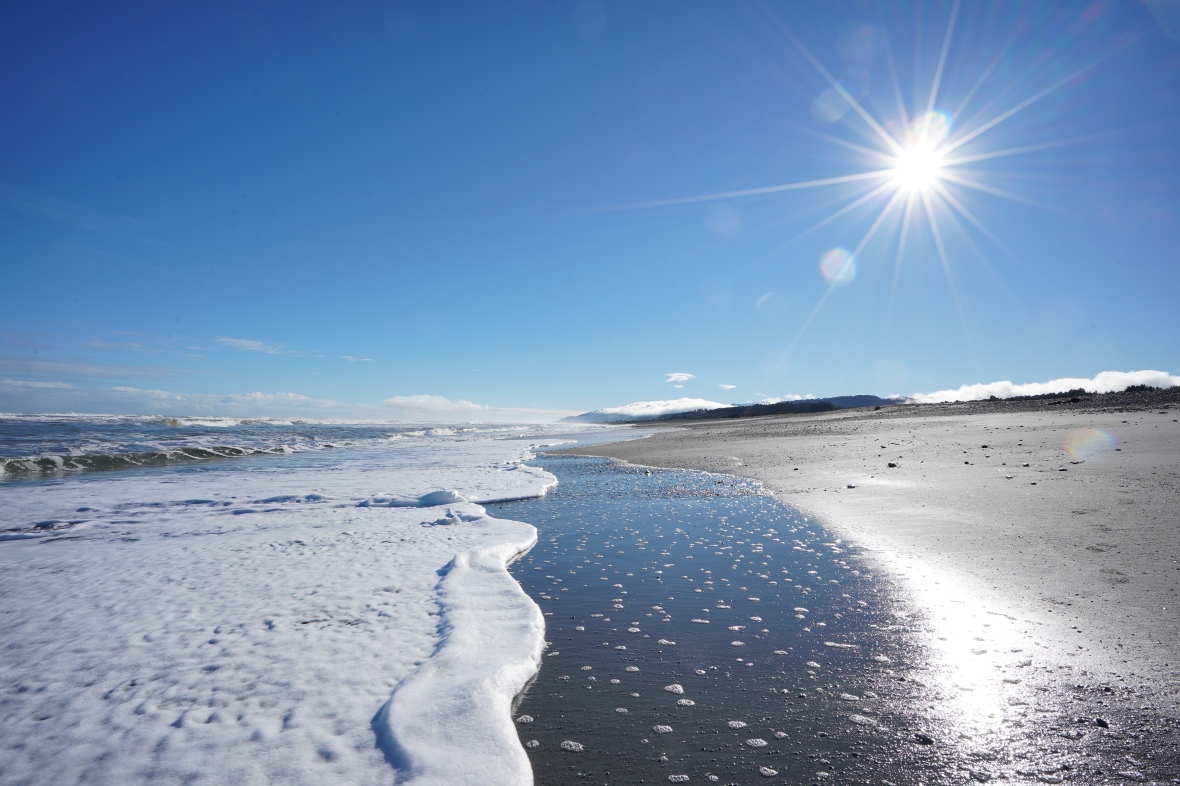 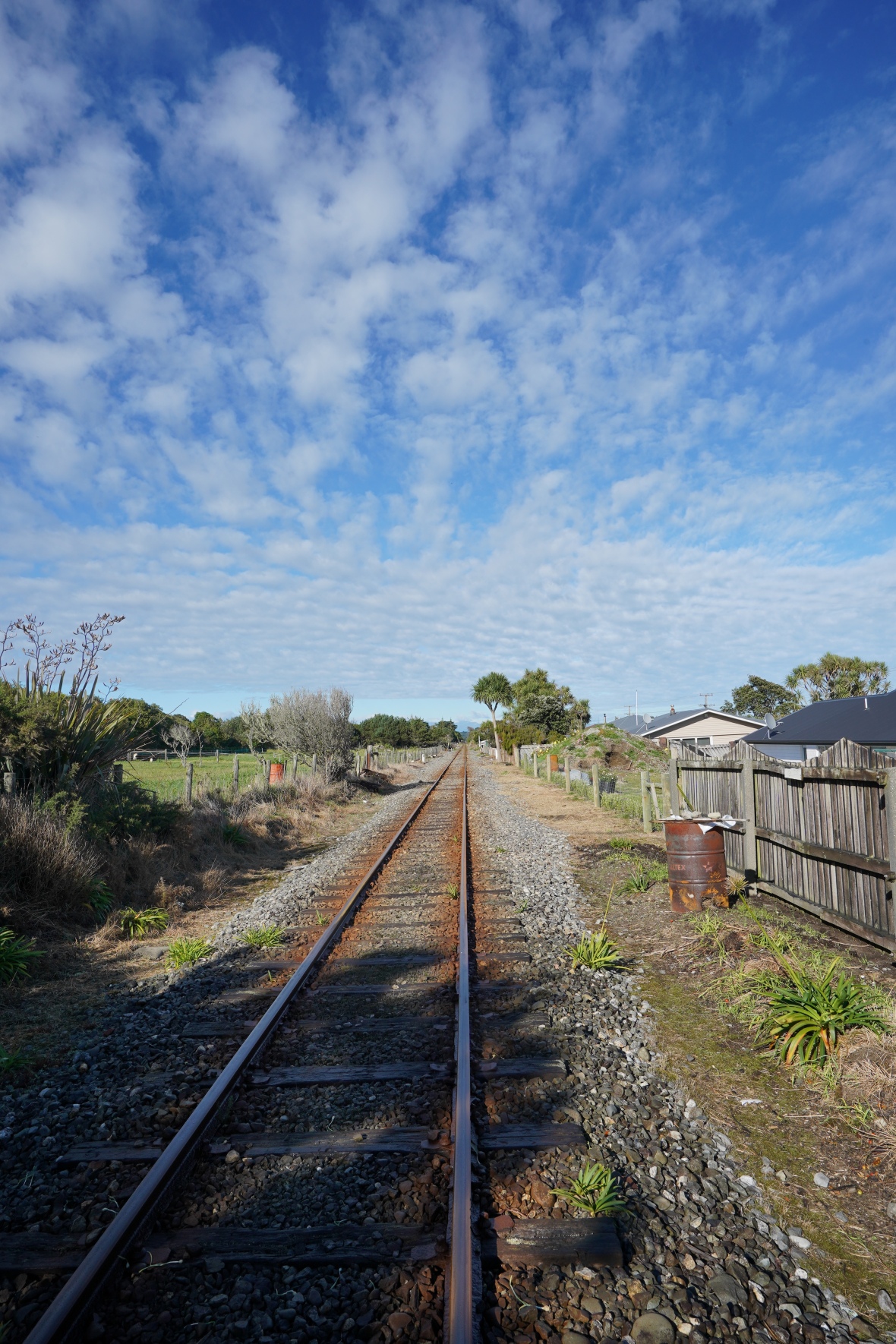 1. Beach at Paroa, 2. Trainline behind Irene and Murrays house. A freight train passes by only twice a day.

Saying farewell, for another year or two, we headed north through some lovely scenery – old mining settlements, farms, river valleys and tree clothed hills, following the Grey River. We stopped off at Reefton, a really lovely town with several old hotels, some lovely cafes and which now even boasts a gin distillery.

From there we followed the Inangahua River until its confluence with the Buller River which is famed for its white water rafting. 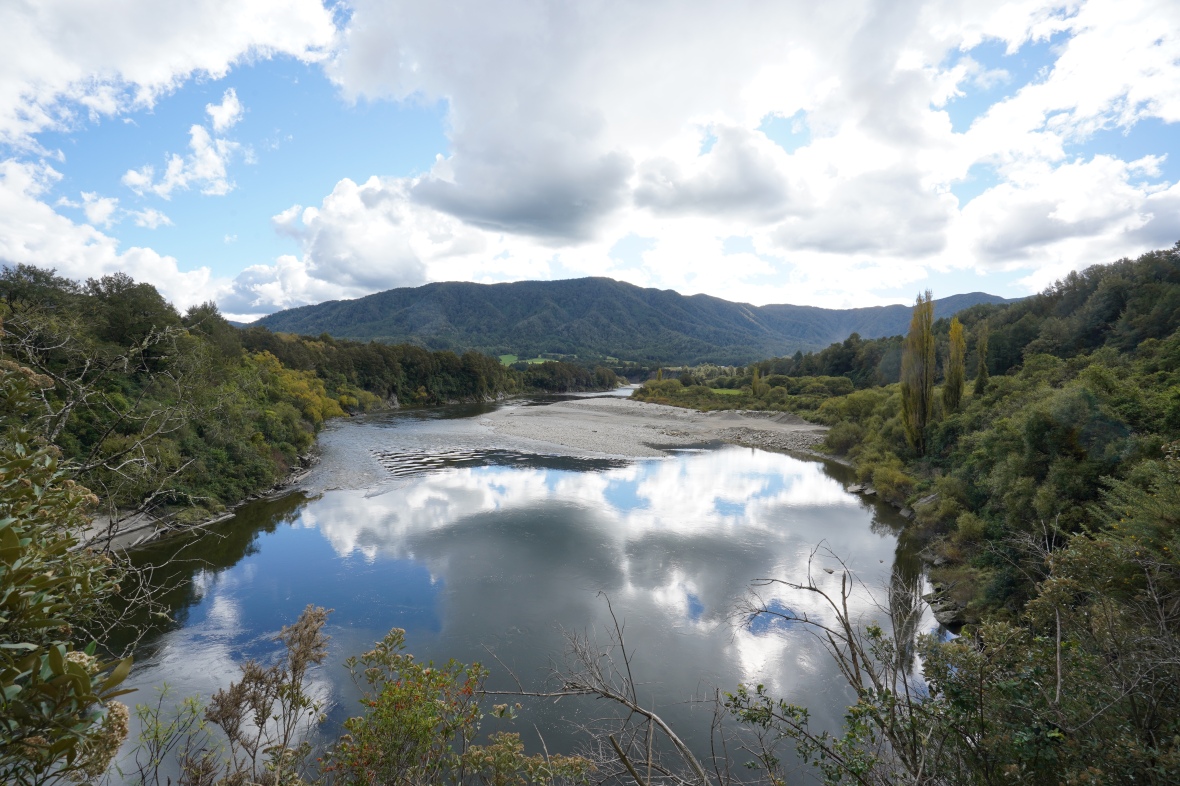 At Inangahua Junction we made a sharp right turn to make our way back east. Rather than tire ourselves out making it to the east coast in one day we elected to break our journey at the Owen River Tavern, 20 odd klms from Murchison. 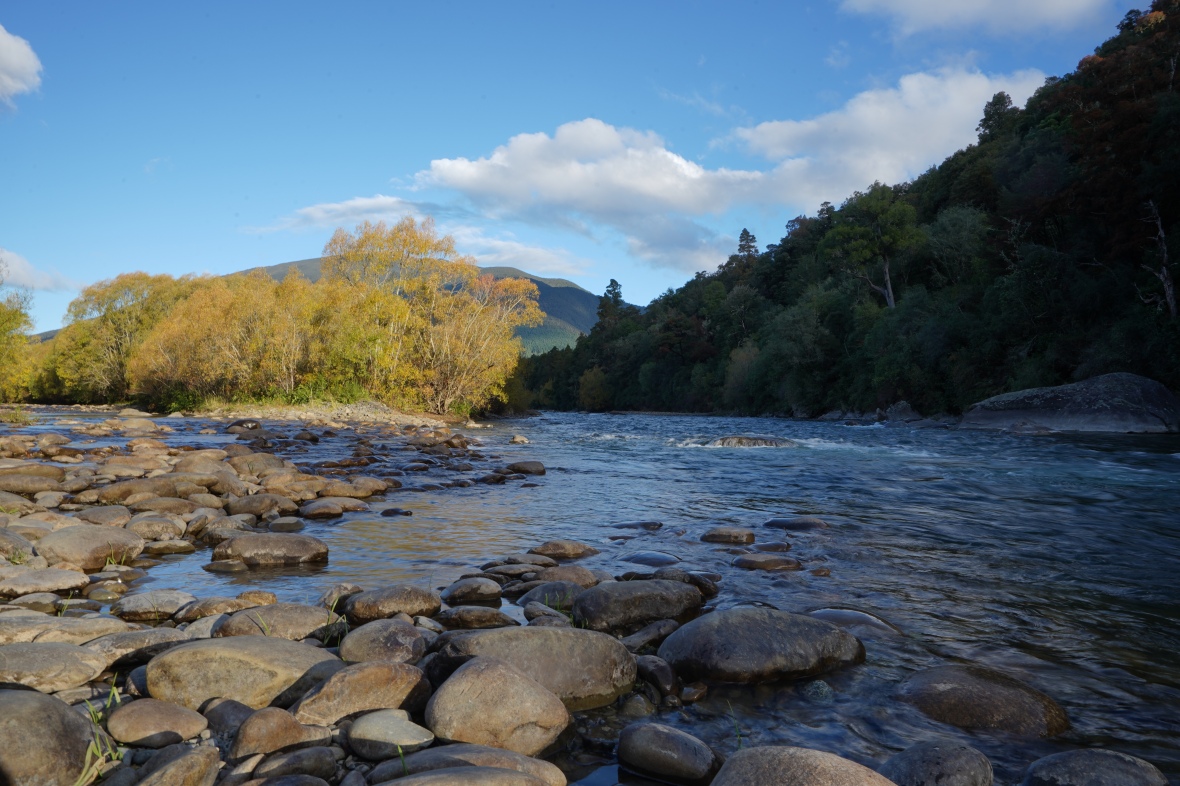 Confluence of the Owen River and the Buller

There were only 5 of us drinking in the cozy bar of the tavern that night; Jane and I, a voluble chap who drove a car transport lorry and a farmer and his wife who had biked the Ghost Trail, an arduous bike trail. You could tell it was arduous as they looked absolutely knackered despite clearly being a fit couple.

The menu didn’t seem very inspiring and the dining room less so and yet our spicy venison stir fry was a tonic for the jaded palette. The venison was soft, succulent and tender, the vegetables just this side of al dente, the rice fluffy and aromatic and the spicing just spot on. Kim was very clearly proud of John’s cooking and so she should be. It was delicious and a real surprise to find in such a spot.

The bar boasted a pool table so Jane and I got a beer and chalked up our cues (though, there was no actual chalk to be had) and lowered ourselves to the baize (and, no, that’s not a euphemism for anything else). We were playing eight-ball. Well, I was playing eight-ball; Jane didn’t have a clue what she was playing! I whopped her in the first frame with a wicked break shot and some lovely cuing action. We were fairly even in the second frame but I miscued my white and sent the black eight ball into the top right corner pocket, thus handing the game to Jane. By now all the other guests had gone to their beds, Kim was yawning so we called it a draw and crept back to our room despite it being only just after 9pm.

The following day we were still following the Buller River as we took a right hand turn at Kawatiri Junction onto the SH63. We took a break at St Arnaud, going down to have a look at Lake Rotoiti. In a cafe we got talking to a lady who was also brought up in Cobden like Irene and Murray and who also went to the same school as them. It turned out she was just a year younger than Murray but when we asked if she remembered him she replied, with a chuckle, that she hadn’t been interested in boys then!

St Arnaud is a watershed. The Buller River flows westward out of Lake Rotoiti but crossing the nearby Beebys Knob (that really is the name, folks) you begin a journey down a river whose very breath brings nectar to the golden grape, whose eastward flowing waters are blessed by Dionysius, and whose many waters bear the name Wairau. 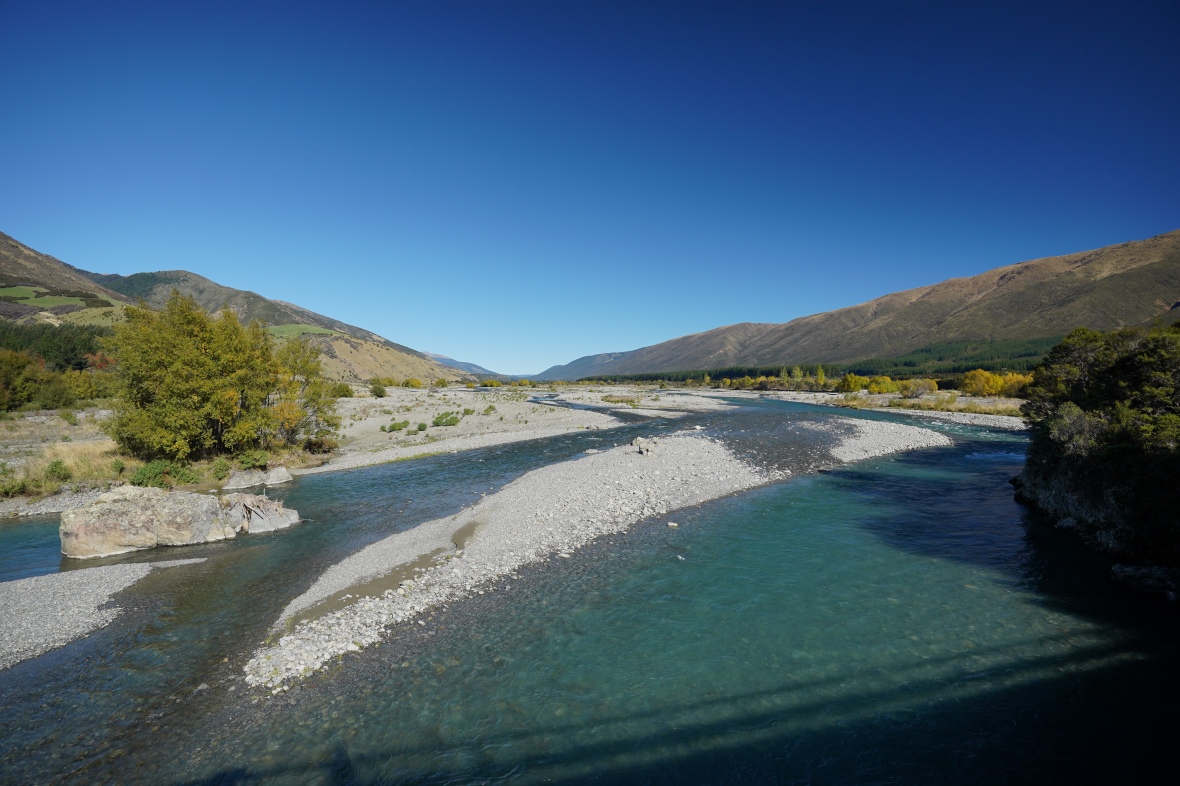 Before too long the Wairau Valley opened out before us, a viticulturist’s book laid open, our road the spine from which the straight rows of post, wire and vine formed letters, words, couplets, stanzas and poems written in praise of nature’s most perfect store of the heat and the light of our bounteous sun; the grape from whose skin oozes an elixir of life. 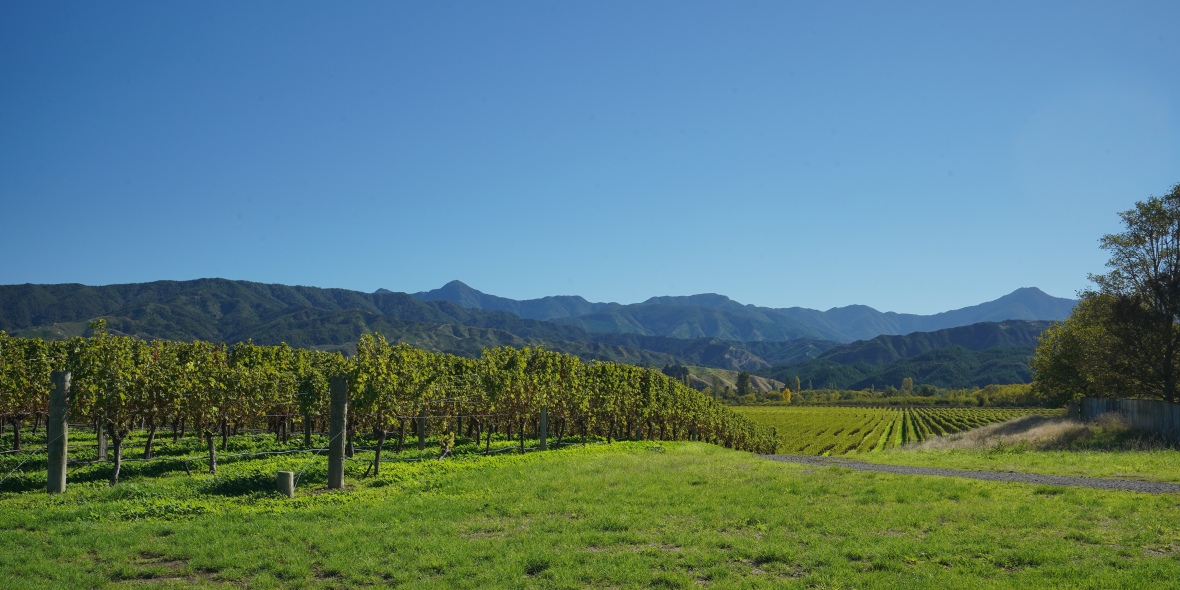 The Wairau Valley is full of vineyards and wineries whose names were familiar to us but also those of which we had no knowledge at all. For instance, Clos Henri. We were a little too early to get into our new ‘digs’ so turned up the track to Clos Henri for a little wine tasting accompanied with a cheese platter. We sat in the sun outside a rather pretty church like building whilst the wine guide explained each of the wines she had brought to us, along with a selection of some very fine cheeses. 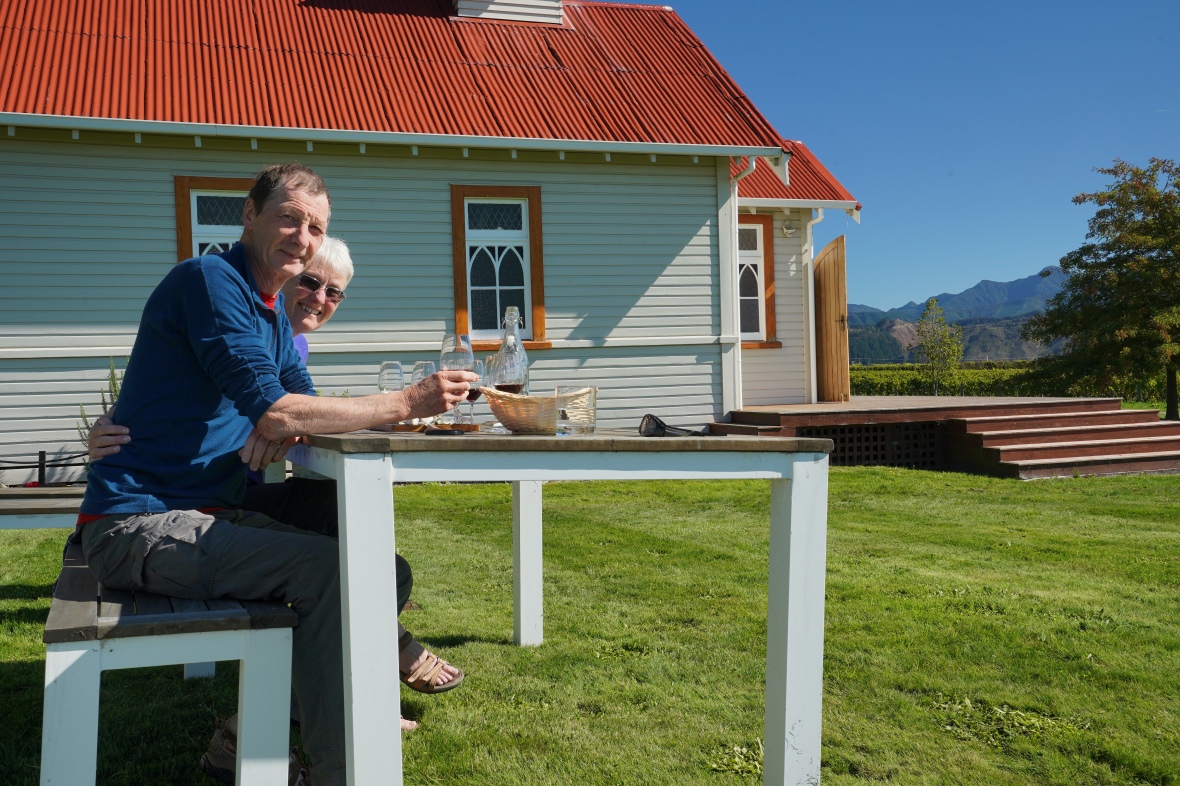 Clos Henri was established by a French family from the Sancerre region and their wine is produced in a French style and grown organically. And it did taste pretty special so we bought a bottle of Sauvignon Blanc.

By now it was time to get to our accommodation so we followed the directions down a small dirt road and turned into the Misty Cove vineyard. We had experienced some difficulty in finding a place to stay in the Blenheim area and this winery was one of the few places available to us. Honest!

Our unit was actually THE cellar door and on entering the first thing we saw was the tasting bar and an array of all the bottles of wine the winery produces. We had a kitchen, a large refectory table, a swanky lounge area with a gas fire in the wall and a lovely bedroom. There was even a swimming pool outside, though it was unheated and the Autumn days, though sunny, weren’t conducive to an early morning dip! Or a dip at anytime of the day, come to that.

We had been worried that we would have hoards of people traipsing through our space but it seems that the main tasting room has been shifted to Renwick town and we therefore had the whole place to ourselves.

It was bliss to be surrounded by the grapevines and to witness the wonderful sunrises and sunsets amongst them. I had hoped that we would be there to see some of the harvest but Seamus, who lived on site with his wife and who was a director of the wine company, explained that this summer had been hot enough to bring on the grapes two weeks earlier than normal. So they’d all been picked, squashed and fermented. Another season put to bed. 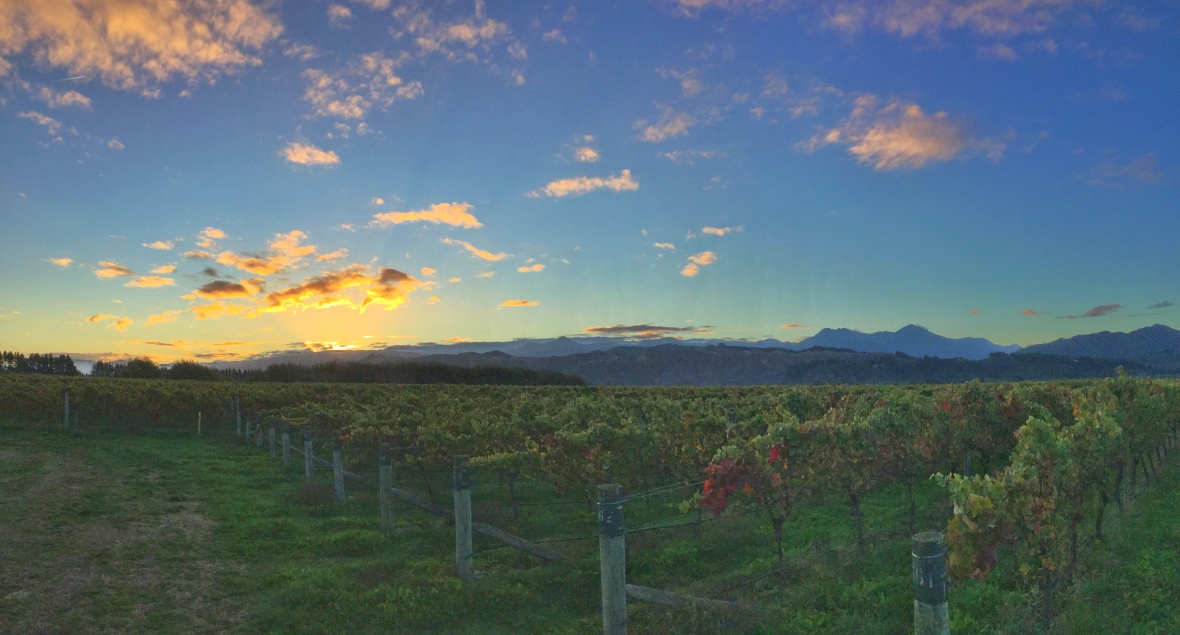 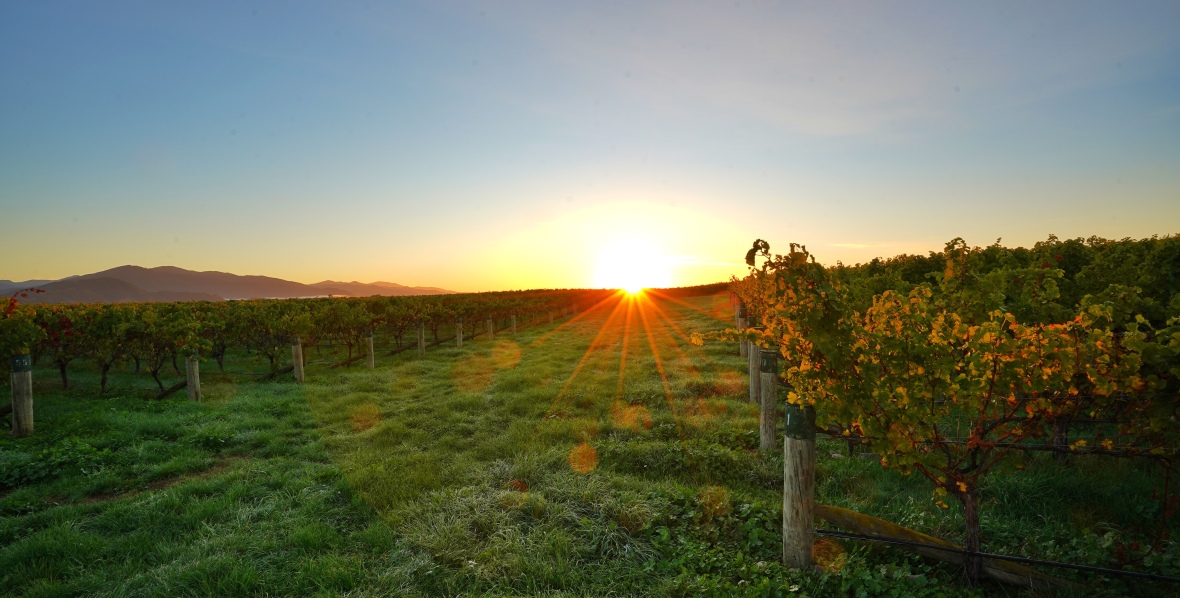 Our cellar door accommodation was a little way out of the main winery area but the next day we had a wonderful tour of the tasting benches in the vicinity. There were plenty of names we recognised from wine merchants in the UK but it’s great to visit the small, boutique producers you won’t find at home. Such as Hans Herzog, an organic (and bio-dynamic) producer. The people who staff the wine counters are usually very knowledgeable and you get to learn about the intricacies of viticulture. Which, of course, means that you can fool yourself that you are on an educational trip rather than just a wine drinking experience.

We bought several wines at our favourite winery, Nautilus and ate a lovely lunch at Wairau winery before returning to our home amongst the vines. We had a lovely, relaxing two days in the Wairau Valley, a mini holiday within a holiday. And we came away with more than we had arrived with. And the evidence of that rattled its way with us to our next destination – the very far north of the South Island. 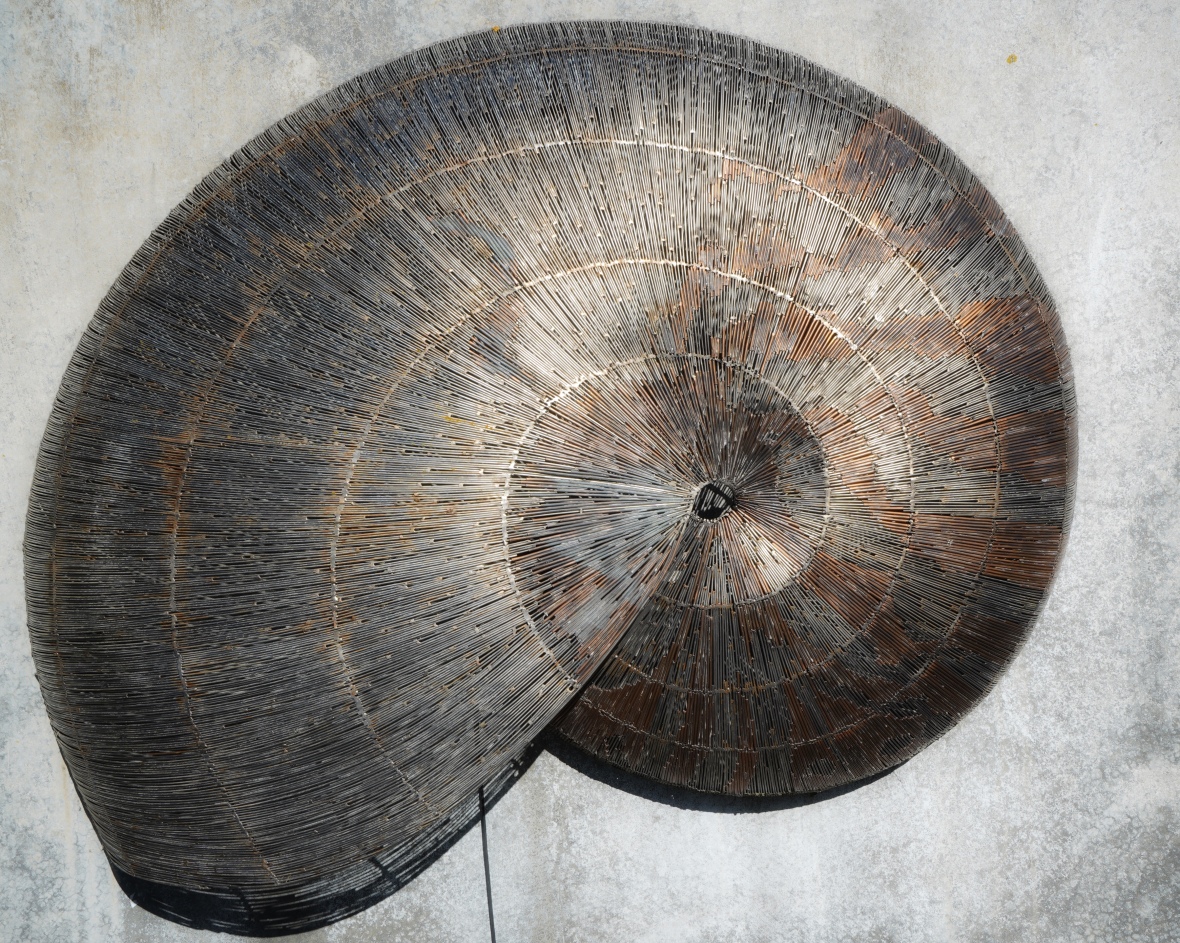